A boy works at a machine in a Kovno ghetto workshop. 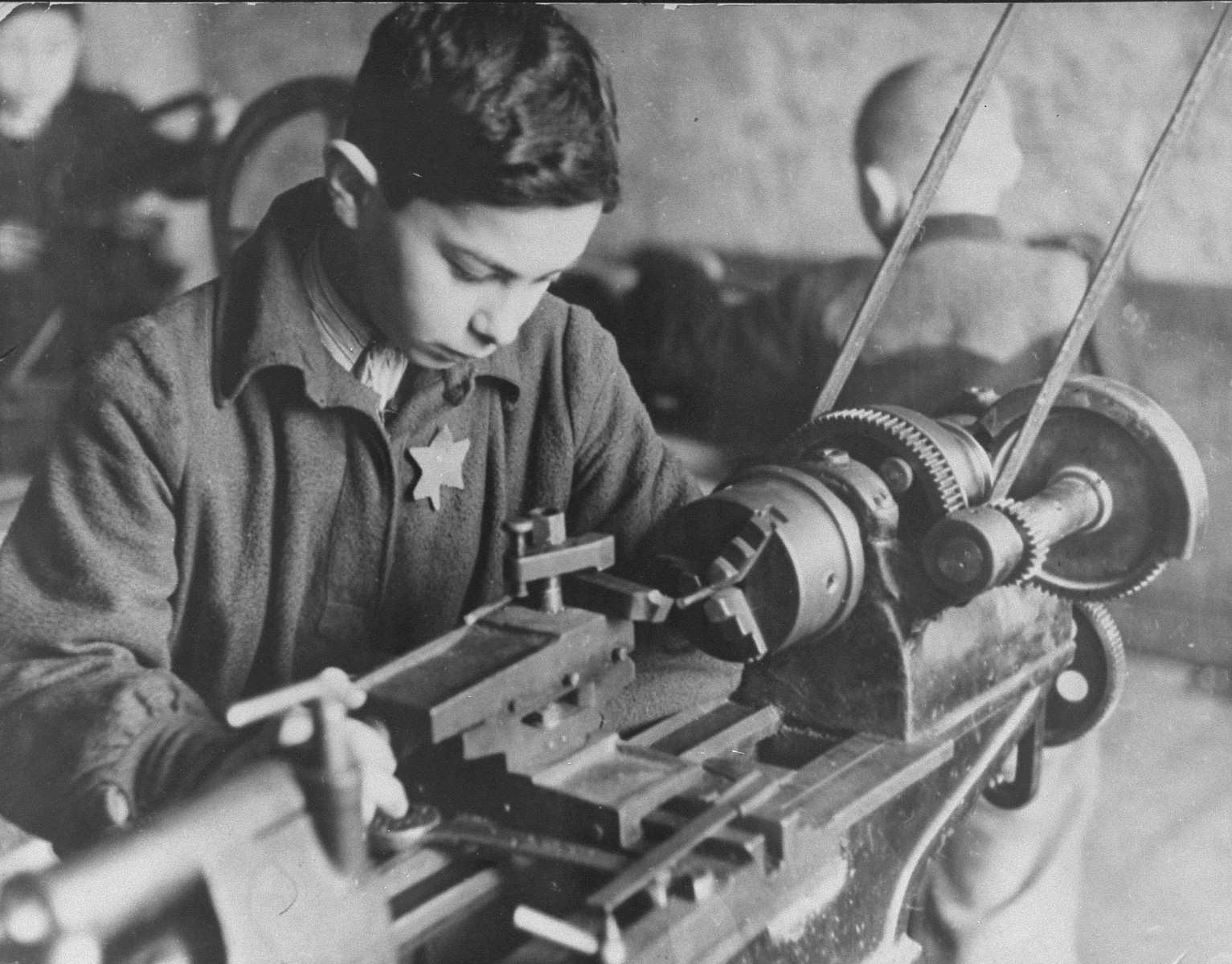 A boy works at a machine in a Kovno ghetto workshop.

Event History
Approximately 10,000 children and youth below the age of 20 moved into the Kovno ghetto in August, 1941. Within a few months almost half of them (4,400) had perished in the "Great Action" of October 28, 1941. After the Germans issued a decree in July 1942 making pregnancy illegal and punishable by death, few children were born in the ghetto. During the fall of 1941 the community organized schools for children, but on August 25, 1942 educational instruction was formally banned. Limited elementary education continued clandestinely in private homes, and German authorities permitted the continuation of vocational schools for teenagers. In these schools Hebrew and Jewish history were taught in addition to crafts. Most children, however, did not go to school. They worked either in labor brigades or at home caring for younger siblings and keeping house. Originally, only children 16 and above were conscripted for slave labor. However, during the last year of the ghetto, all able-bodied teenagers over the age of 12 were registered for work. Those too young for forced labor often sold their services in order to bring in extra food for their families. These illegal workers were called "malokhim" or angels. In November 1943 fear for the safety of the remaining children in the ghetto mounted after word was received of a special "Children's Action" that had taken place in the nearby ghetto of Shavli (Siauliai). For the first time parents actively sought hiding places for their children outside the ghetto. The Kovno ghetto "Children's Action" took place on March 27-28, 1944. During the two-day action German troops and Ukrainian auxiliaries went from house to house and rounded-up the ghetto's remaining children who were below the age of 12. The 1300 victims of the "Children's Action" were either shot at the Ninth Fort or deported by train to an unknown locale, where they were killed.
In March 1942, the ghetto received permission to open ORT vocational schools for teenagers. The school began modestly with forty students offering classes in carpentry, sewing, locksmithing and metal work. Following the closure of other ghetto schools, the school broadened its curriculum to include science, math, history and Hebrew. By the winter of 1943, following news of the children's action in Shavli, the school began accepting more students so that more children would have official work cards. The school grew to 440 pupils, some as young as eight years old. The director of the vocational school, Jacob Olieski, survived the war, immigrated to Israel and headed the network of ORT schools there.
See https://www.ushmm.org/wlc/en/article.php?ModuleId=10005174.
See Also https://www.ushmm.org/wlc/en/article.php?ModuleId=10005265.
See Also "Kauen Main Camp" in Encyclopedia of Camps and Ghettos, Volume 1 Part A.
See Also "Kauen Main Camp" in Encyclopedia of Camps and Ghettos Volume 1 Part A.