Moses Korn, a Jewish prisoner forced to work in Sonderkommando 1005 unit, poses next to a bone crushing machine in the Janowska concentration camp. 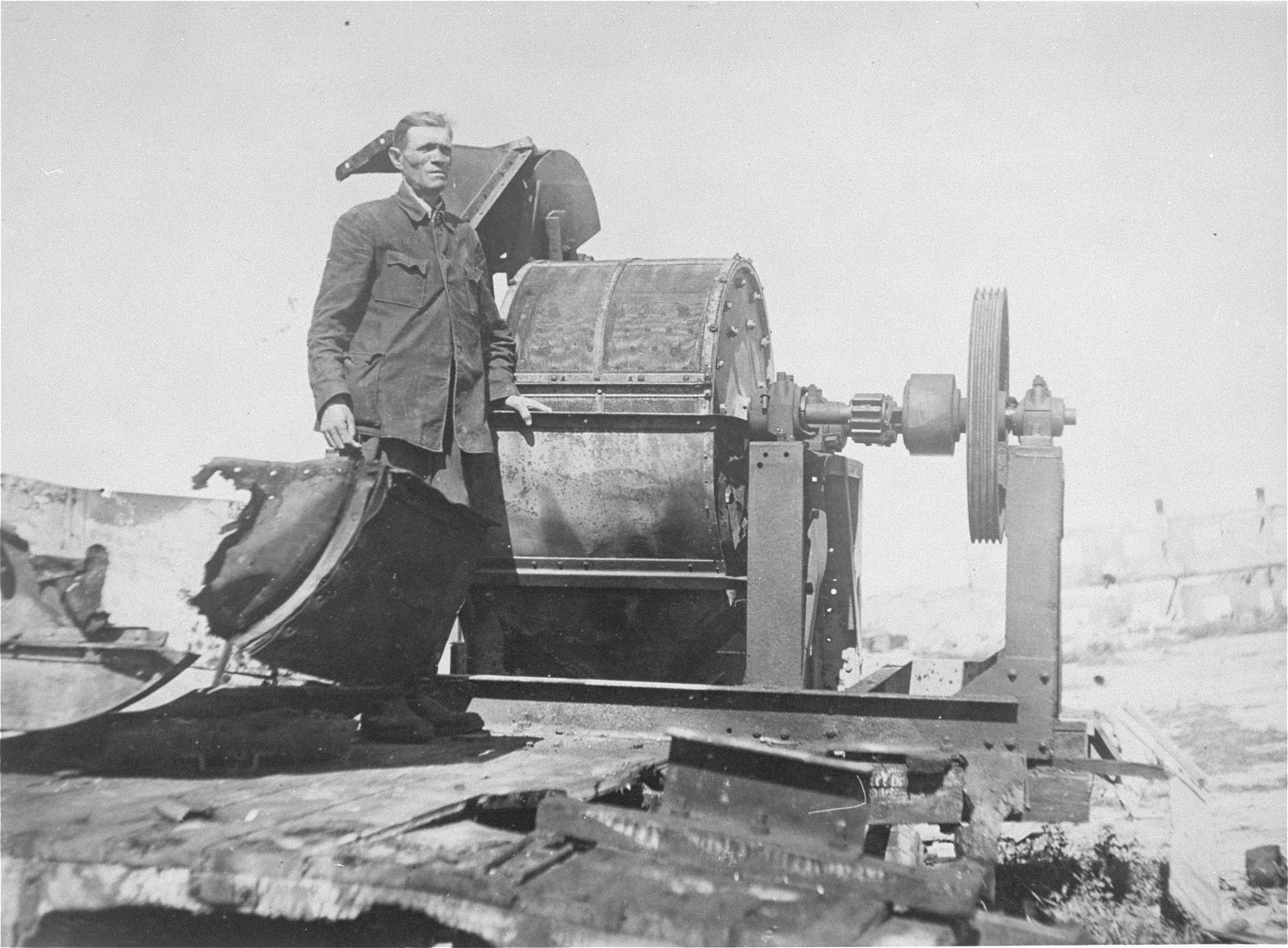 Moses Korn, a Jewish prisoner forced to work in Sonderkommando 1005 unit, poses next to a bone crushing machine in the Janowska concentration camp.

This photograph ws taken soon after liberation for the Extraordinary Commission or the Red Army.

Event History
The Sonderkommandos 1005 were the special units created to implement the large-scale action to obliterate the traces of the mass killings committed by Nazis in occupied Eastern Europe. The decision to commence the action was made in Berlin after the news of the mass murders began to spread in the Allied countries, and when hastily buried corpses began to pose a health hazard in occupied Poland. The operation was headed by SS-Standartenfuehrer Paul Blobel, who created a small staff in Lodz. An architect and engineer by training, Blobel developed methods for burning the bodies on pyres, crushing the remaining bones and scattering the ashes. The first phase, which lasted from June 1942 to June 1943, saw the burning of bodies in the Action Reinhard death camps of Belzec, Treblinka and Sobibor, and at Chelmno and Auschwitz. A second phase commenced in June 1943 when mass graves in Poland and the Eastern Territories began to be liquidated. The first site may have been the Janowska camp near Lvov. In August of that year Sonderkommando 1005 units burned the bodies of Jews massacred at Babi Yar and subsequently, those killed in Kamenets-Podolski. Later, units were sent to Yugoslavia, Latvia, Lithuania and Belarus. As the Soviet army advanced in mid 1944, the activity of the Sonderkommandos 1005 focused on the General Government. Each Sonderkommando 1005 unit consisted of several SD (Security Service) and SIPO (Security police) officers, who supervised the work, and several dozen Ordnungspolizei (Order Police), who served as guards. The labor was carried out by prisoners, mainly Jews, who were organized in three groupings: one to open the graves and exhume the bodies, a second to erect the pyres, transport the bodies and arrange them on the pyres, and the third to sift through the human remains for valuables, crush the bones and scatter the ashes. Certain prisoners were assigned the task of keeping the fire going and counting the corpses burned, while others were responsible for leveling the terrain, plowing and replanting the site after the graves were destroyed. Most of the prisoners were killed on the completion of their assignment.

According to Leon Wells, one survivor forced to serve in the Janowska Sonderkommando who testified at the Eichmann Trial, the Janowska Sonderkommando 1005 was formed on June 15, 1943, when forty people were taken out of the camp, ostensibly for a road building detail. For the next several months up to 120 prisoners were assigned to the death brigade, which incinerated tens of thousands of bodies. Among their grisly tasks was to grind the bones that remained after the burning process in a special machine that used steel balls to pulverize the bones. The prisoners worked 8-10 hours a day. While they marched to and from work in the ravine they were forced to sing, often accompanied by the camp orchestra. On November 19, 1943 after the final liquidation of the Janowska camp, a group of the surviving Sonderkommando members revolted. They succeeded in killing a few guards, and a number of their members, including Wells, escaped.

[Sources; "Aktion 1005" in Guttman, Israel (ed.). Encyclopedia of the Holocaust. MacMillan, 1990, 1:11-14; The Nizkor Project. The Trial of Adolf Eichmann, Session 23. www.nizkor.org/hweb/people/e/eichmann-adolf/ transcripts/Sessions/Session-023-02.html (1 July 2004).]
https://www.ushmm.org/wlc/en/article.php?ModuleId=10007273.
Biography
Moses Korn was born in Lvov ca. 1895. He had three siblings: Severyn (b. 1896), Hersch, and a sister (name unknown). Before World War II Moses earned a living as a horse trader with his brother Hersch. He also ran a horse and carriage transportation service. Moses was married and had two children. His entire immediate family was killed during the war. Between 1942 and the fall of 1943 (approximately), Moses was interned in the Janowska concentration camp near Lvov. In the summer of 1943 he was forced to work for the Sonderkommando 1005, a special unit whose job it was to remove the traces of Nazi atrocities at the camp by burning the bodies of the victims. Moses escaped from the camp sometime in the fall of 1943 and found shelter with a gentile family in Lvov until the Soviets liberated the city. Soon after, he was joined by his brother Severyn and two of Severyn's sons: Leon and Villy. They found an apartment, and soon Moses and Severyn opened a scrap metal and second-hand clothing business in the marketplace. Moses provided testimony to a Soviet war crimes investigation team and complied with their request to go to Moscow to testify in a war crimes trial against captured SS officers who had worked in Janowska. Apparently, one of the accused was in possession of a photo of the Sonderkommando 1005 in Janowska and Moses was able to identify himself in the picture when it was shown to him at the trial. Moses later moved to Linz, Austria, where he died of cancer in 1947. A copy of the Sonderkommando 1005 photo was later sent to Moses' nephew, Leon Korn, in the U.S.