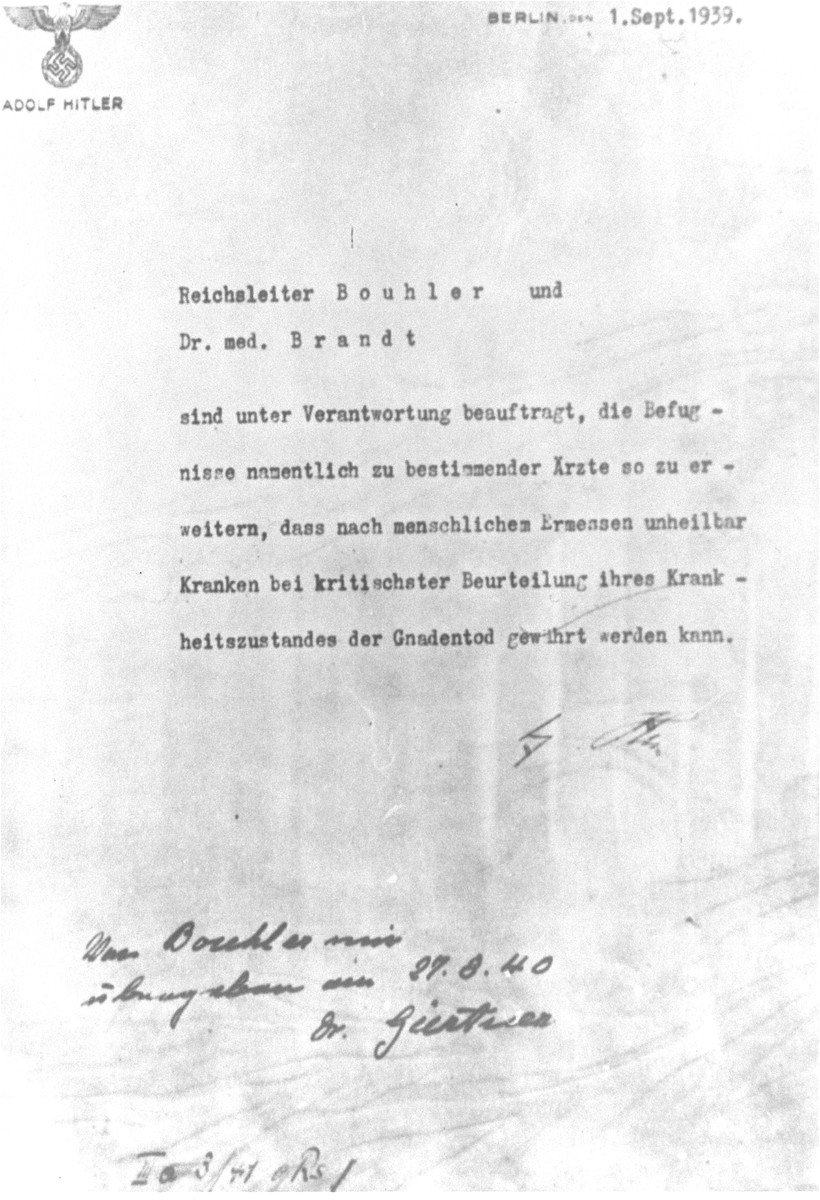 The text of the letter states that "Reichsleiter [Philipp] Bouhler and Dr. med. [Karl] Brandt are charged with responsibility to broaden the authority of certain doctors to the extent that [persons] suffering from illnesses judged to be incurable may, after a humane, most careful assessment of their condition, be granted a mercy death. [signed] Adolf Hitler."

Event History
The so-called T4 (Euthanasia) authorization, written on Hitler's private stationery and backdated to September 1, 1939, is actually a copy of the original signed by Hitler sometime between mid-October 1939 and early 1940. In the early summer of 1940, Reich Justice Minister Franz Guertner, concerned about the difficulties raised by the secret euthanasia program for local and regional justice officials, questioned euthanasia plenipotentiary Philipp Bouhler about the advisability of continuing the program given public knowledge of the operation. To demonstrate that the euthanasia program was the "wish of the Fuehrer," and not simply the whim of the SS, which Guertner had long opposed, Bouhler gave the Justice Minister a facsimile of the original Hitler document. Near the end of the war, the original document and all copies of it in official hands were destroyed, but because Guertner had died in January 1941, no one thought to look through his papers. His copy of the T4 authorization thus became the only surviving copy. This copy was seized by Allied officials after the war and presented as evidence at both the International Military Tribunal and the Medical Case Trial in Nuremberg. The document was assigned evidence number 630PS (Paris/Story) and was published in the International Military Tribunal "Blue Series," the proceedings and evidence of the Nuremberg IMT.

[Source: USHMM Historian Dr. Patricia Heberer.
Biography
Philipp Bouhler (1899-1945), SS-Obergruppenfuehrer who served as chief of Hitler's chancellery and head of the T-4 Euthanasia program. Born in Munich, Bouhler was one of the earliest members of the NSDAP (Nazi party). In 1922 he left the department of philosophy at the University of Munich to help edit the Voelkische Beobachter, the NSDAP newspaper. The following year he took part in the Munich Beer Hall Putsch. After a brief period of incarceration, Bouhler became business manager of the NSDAP, a position he held from 1925 to 1934. In 1933 he became a Reich leader of the Nazi party and was elected to the Reichstag from the district of Westphalia. On September 17, 1934, Bouhler became Hitler's Chief of the Chancellery. In addition he was appointed chief of the NSDAP Censorship Committee for the Protection of National Socialist Literature and of the Study Group for German History Books and Educational Material. In September 1939 Bouhler, along with Karl Brandt, was tasked by Hitler to develop the T-4 Euthanasia program. When a public outcry put a halt to the program in August 1941, he helped secure the reassignment of T-4 personnel to the concentration camps. At the end of the war Bouhler sought protection from Hermann Goering, and was at the Reichsmarschall's headquarters in Zell-am-See in May 1945 when Bouhler and his wife committed suicide shortly before the arrival of the Americans. Bouhler wrote two books: "Struggle for Germany," a chronicle of the NSDAP, and "Napoleon: the Comet Path of a Genius," a biography of the French leader that was one of Hitler's favorite books.

Karl Brandt (1904-1948), SS-Gruppenfuehrer, personal physician of Adolf Hitler, co-director of the T-4 Euthanasia program and Reich Commissioner for Health and Sanitation. Born in Muehlausen, Alsace, Brandt became a physician in 1928. He joined the NSDAP in 1932, the SA in 1933 and the SS in 1934. On the recommendation of his adjutant Wilhelm Brueckner, Hitler named Brandt his personal physician in 1934. In the fall of 1939 Brandt was made co-director, with Philipp Bouhler of the T-4 Euthanasia program. After the program was shut down, Hitler appointed Brandt Reich Commissioner for Health and Sanitation, giving him control over all civilian and military medical facilities. Brandt remained in Hitler's good graces until the final month of the war, when Hitler learned that Brandt was preparing to give himself up to the advancing Americans. On April 16, 1945 he was arrested by the Gestapo and condemned to death by a court in Berlin. His life was saved by Heinrich Himmler who stalled the execution by asking for additional witnesses. On May 2, a few days after Hitler's suicide, Brandt was released by order of Karl Doenitz. He was rearrested by the British on May 23 and placed on trial as one of the main defendants at the Doctors' Trial in Nuremberg. In addition to his membership in the SS, Brandt was charged with special responsibility for the numerous medical experiments to which thousands of concentration camp inmates were subjected, as well as with the planning and execution of the Euthanasia program. Brandt was sentenced to death on August 20, 1947 and hanged on June 2, 1948 at Landsberg prison. Before his execution he was quoted as saying, "It is no shame to stand on this scaffold. I served my Fatherland as others before me."