Dina Pronicheva, a Jewish survivor of the Babi Yar massacre, testifies about her experiences during a war crimes trial in Kiev. [Oversized print] 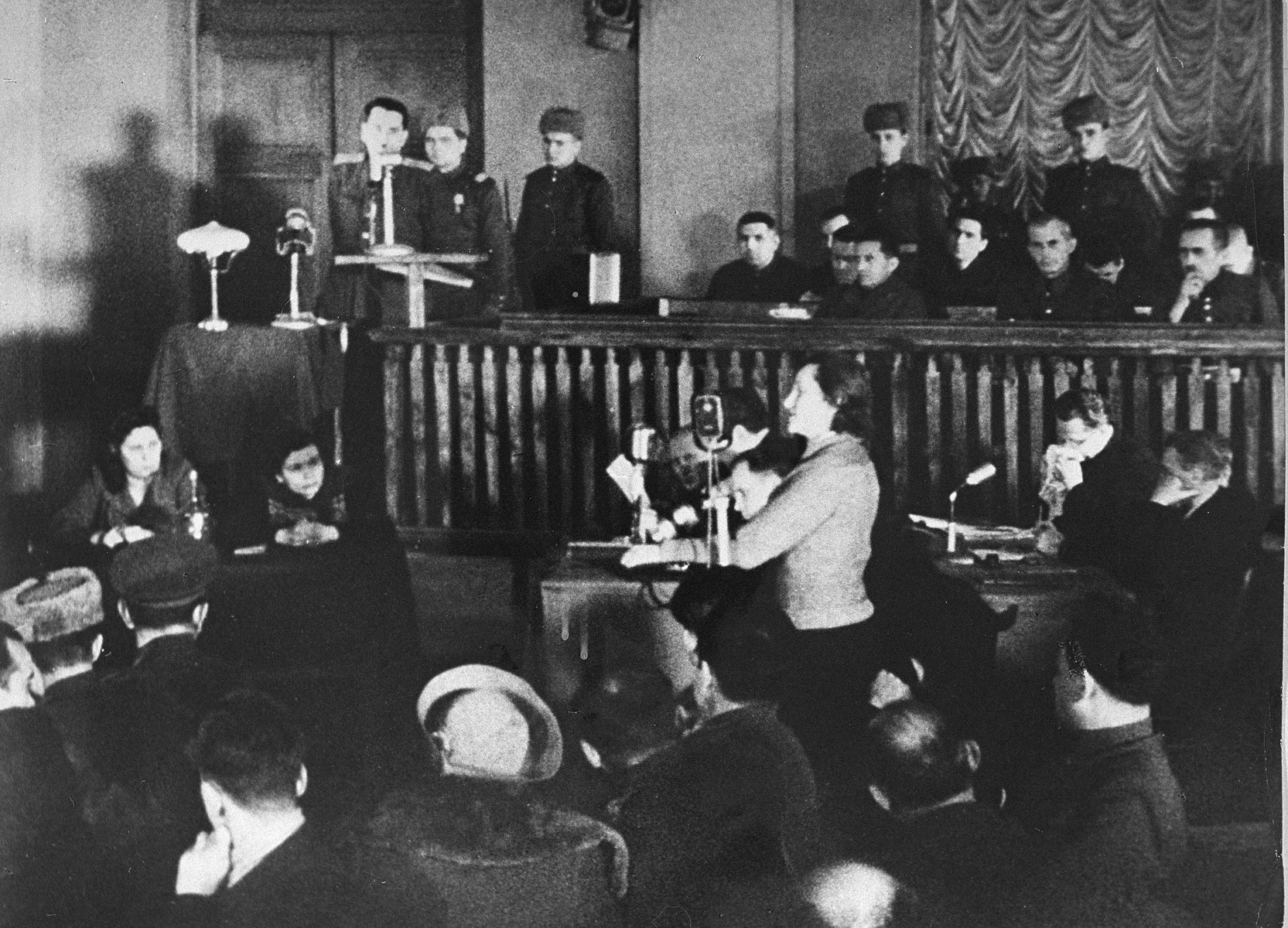 Dina Pronicheva, a Jewish survivor of the Babi Yar massacre, testifies about her experiences during a war crimes trial in Kiev. [Oversized print]

Biography
Dina Mironovna Pronicheva (1911-1977) was one of a handful of survivors of the Babi Yar massacre in Kiev that took place on September 29-30, 1941 and resulted in the deaths of over 30,000 Jewish civilians, including Pronicheva's parents and sister. Her recorded testimony, which exists in several versions, is one of the only extant eyewitness accounts of the German atrocity. Pronicheva was the daughter of Miron Aleksandrovich Mstislavskii and Anna Efimovna Mstislavskaia, a Jewish couple living in Kiev. She had two brothers and a sister. Pronicheva attended public school, where she attained fluency in Ukrainian. She was married in the early 1930s to a non-Jewish Russian by the name of Viktor Aleksandrovich Pronichev with whom she had two children, Vladimir and Lidiia. Up until the German occupation Pronicheva was employed as an actress by the Kiev puppet theater. In the fall of 1941 Pronicheva's brothers were both serving in the Red Army. On September 29, 1941, the day the Jews of Kiev were instructed to gather at a certain intersection with their documents, valuables and warm clothing, Pronicheva (who was posing as a non-Jew) went to the assembly point to see off her parents and sister. While accompanying them to what she thought would be their point of departure, she was caught up in the movement of people to the ravine at Babi Yar. Once she entered the cordoned off area near the gate of the Jewish cemetery, she was quickly moved along with her family through the gauntlet of Germans wielding rubber clubs and sticks to an open space where Ukrainian auxiliary police forced the Jews to strip naked. It was at this point, according to some versions of her testimony, that Pronicheva's mother urged her to save herself by claiming she was a non-Jew. Pronicheva then went up to one of the Ukrainians and insisted she was there by mistake. After inspecting her papers, he instructed her to join a group of non-Jews who had also come in by accident and wait with them until the shooting was over. However, towards nightfall, when a German officer was brought over to inspect Pronicheva's group, he insisted that they be shot as well because they had witnessed too much. The group, which numbered about 50 people, was then led to a narrow ridge cut along one side of the ravine and shot one by one into the mass grave below. Pronicheva threw herself into the ravine just before it was her turn and played dead until the Germans and Ukrainians had finished. She then inched her way out of the mass of dead bodies and fled. When she sought assistance at a nearby cottage, the family turned her over to the Germans. Pronicheva later managed to escape from her captors and for the remainder of the war eluded arrest by moving around and assuming a variety of non-Jewish identities. Her husband, Victor, saved their half-Jewish son from being shot, but was himself arrested and did not survive. Following his arrest, friends of the family placed the two children in an orphanage, where Pronicheva found them in March 1944. After the war Pronicheva gave testimony about the Babi Yar atrocity on several occasions. The first is believed to have been in connection with a Soviet military tribunal that was held in Kiev from January 17 to 28, 1946. At this trial 15 German and Austrian members of the Schutzpolizei and gendarmerie for the Kiev region were tried and convicted of the murder and torture of civilians and POWs. Pronicheva took the witness stand on January 24, and her testimony was recorded on film for a Soviet Ukrainian newsreel.