Soviets exhume a mass grave in Zloczow shortly after the liberation. 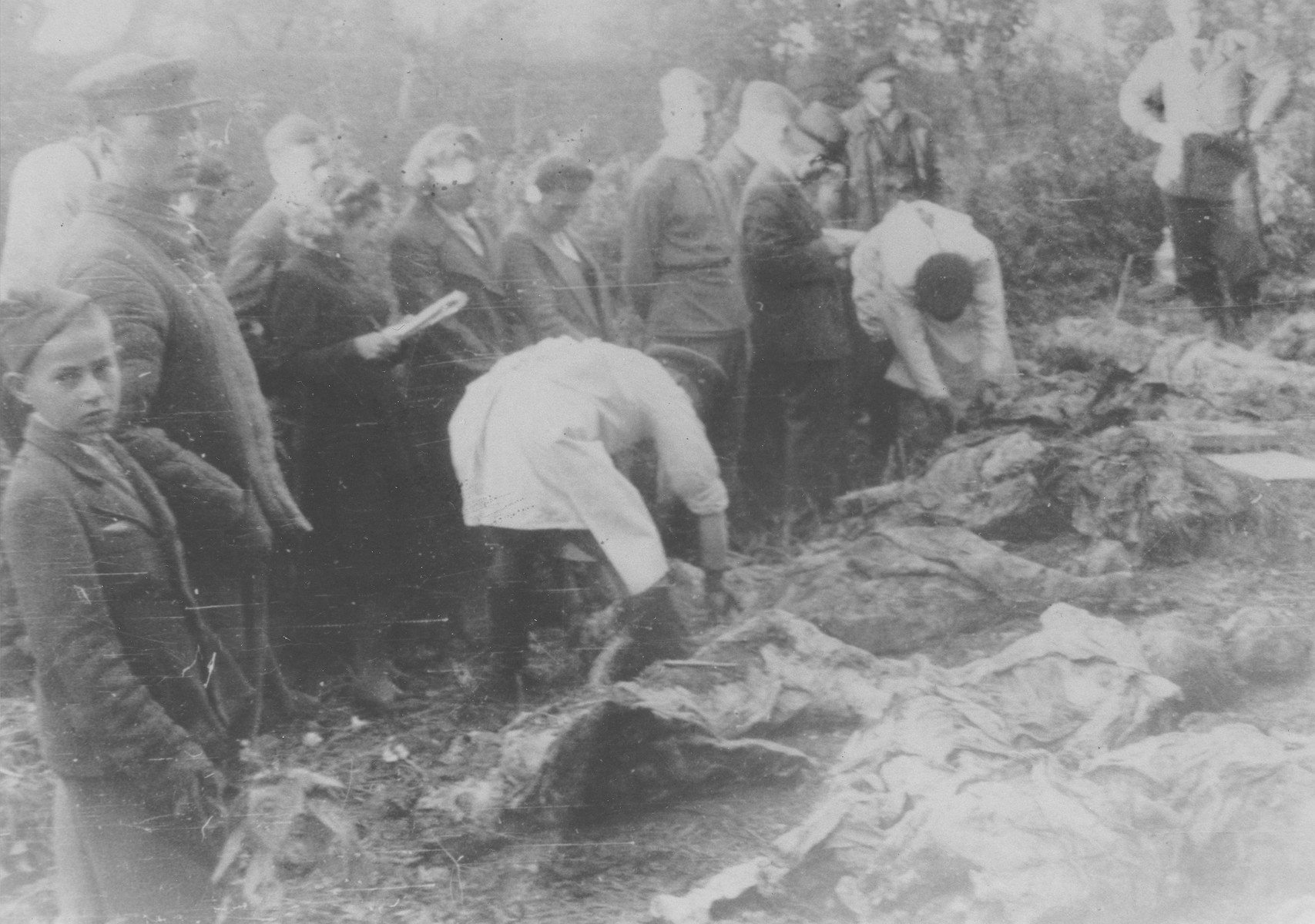 Soviets exhume a mass grave in Zloczow shortly after the liberation.

Event History
Before World War II Zloczow had a population of 20,000, approximately half of which was Jewish, a quarter, Ukrainian, and another quarter, Polish. On September 17, 1939 this town in the western Ukraine, which since 1919 had been apart of Poland, came under Soviet rule and was annexed to the Ukrainian Soviet Socialist Republic. Soon after the new regime took over broad elements of the population, which were deemed "unreliable," became the victims of expropriation, job dismissals, arrests and deportation to Siberia and Kazakhstan. Agents of the Soviet secret police (NKVD) flocked into Zloczow and took over the Zamek citadel, a 17th century fortress that had been used as a prison under Austrian and Polish rule. Immediately after Germany invaded the Soviet Union on June 21, 1941, the communist leadership in Moscow authorized a new wave of arrests of "unreliable" elements in Zloczow (as elsewhere in the western Ukraine). As a result, hundreds of Zloczow residents, (mostly Ukrainians, but also significant numbers of Poles and Jews) were imprisoned in the Zamek. The Soviets had planned to evacuate these prisoners immediately to the Russian interior, but ran out of time. They therefore instructed the local NKVD agents to shoot them en masse, lest they become a fifth column supporting the Nazi invaders. Some 649 prisoners lost their lives in the last days of June 1941 and were hurriedly buried in four mass graves in the courtyard of the Zamek and in an adjacent orchard before the Germans marched into Zloczow on July 1. No sooner had they arrived than a pogrom was unleashed on the Jewish residents. Germans and Ukrainians grabbed Jews off the street and in their homes, beat them, and dragged them off to the Zamek. There, they discovered the victims of the NKVD executions, which intensified their anger toward the hapless Jews, whom they long associated with the Soviet regime. The following day, July 2, the local German commander ordered all Jews from the age of 6 to wear white armbands with blue Stars of David. The Ukrainian militia, which was serving as an auxiliary police force for the Germans, also put up signs ordering the Jews to assemble the next morning in the Town Hall square. The next day, July 3, those that presented themselves and those that were hunted down in their hiding places, were dragged to the Zamek, where they were forced to exhume the NKVD victims from the mass graves. During the course of their labor many were beaten, tortured and shot en masse (by units of the SS Wiking Division), until a more senior Wehrmacht officer arrived on the scene and ordered them to desist. After the women and children were released and the officer left the scene, the shootings resumed. Untold thousands were killed between July 1 and 4, including the entire Jewish leadership and most of the town's professional class. From the end of June through early July approximately 35 towns in the former Polish Ukraine became the scenes of mass murders comparable to Zloczow.

[Source: Boll, Bernd. "Zloczow, July 1941: The Wehrmacht and the Beginning of the Holocaust in Galicia," in Bartov, Omar, et al (ed). Crimes of War: Guilt and Denial in the Twentieth Century. New York, The New Press, pp.61-99.]