Juliette Usach poses with a group of Jewish youth who are living at the La Guespy children's home in Le Chambon-sur Lignon. 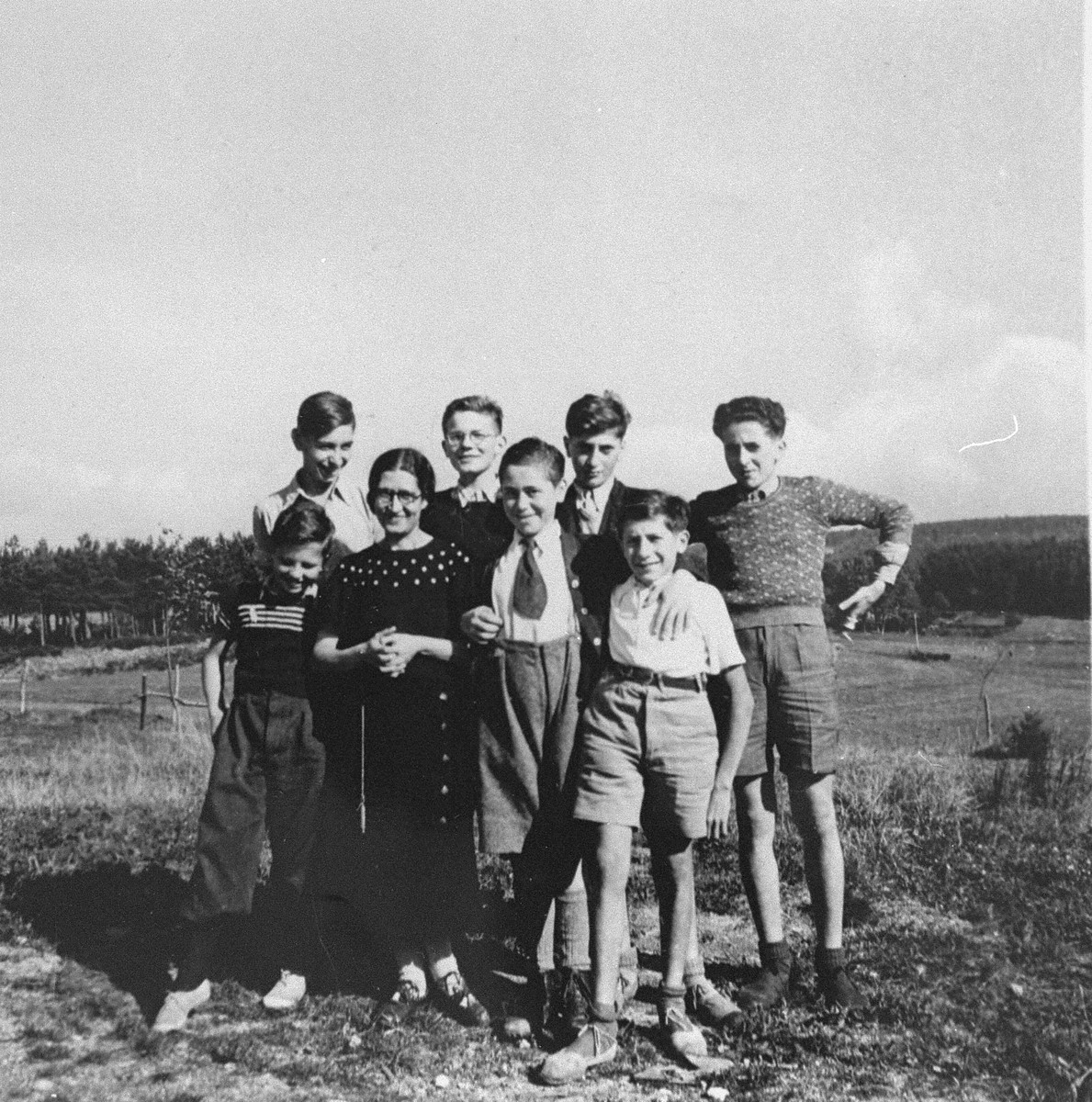 Juliette Usach poses with a group of Jewish youth who are living at the La Guespy children's home in Le Chambon-sur Lignon.

This is one photo from an album presented to Elizabeth Kaufmann prior to her departure from the La Guespy refugee home in Le Chambon-sur-Lignon.

Founded in 1941 by the Secours Suisse aux enfants and run by Juliette Usach, the La Guespy children's home provided shelter to a number of Jewish and non-Jewish refugee children who were living in Le Chambon-sur-Lignon during the Nazi occupation.

Elizabeth Koenig (born Elizabeth Kaufmann) is the daughter of Fritz and Helen (Berggruen) Kaufmann. She was born March 7, 1924 in Vienna, where her father was a journalist and biographer and her mother, a nurse and dietician. Elizabeth had one brother, Peter (b. 1921). When Hitler came to power in January 1933 Fritz was on assignment in Berlin. He soon fell afoul of the Nazi government, and in June was put on trial for his opposition to the regime. The following day he fled to Vienna. Early in 1938, convinced of the inevitability of the German annexation of Austria, Fritz left the country. He traveled first to Prague and then to Paris, where he hoped to meet the rest of his family. Helen and the children, however, met with great difficulty in their attempt to get to France. Initially they boarded a tour bus for a one-day excursion to France, but were stopped at the border when guards became suspicious about the luggage they were carrying. They were sent back to Austria with a notation in their passports indicating they had illegally attempted to cross the border. A second attempt also failed and resulted in their being beaten by SS guards on their return. Fritz then arranged for visas to be made available to them at the French consulate in Cologne. When Helen arrived, however, there were no visas. A chance encounter with a consulate employee outside the building resulted in an illegal exchange. In return for some of her jewelry, Helen obtained the coveted French visas. The Kaufmanns then flew to Paris, arriving in November 1938. For the next year the family lived together in Paris, and Elizabeth attended art school. Soon after the outbreak of World War II, Fritz and Peter were interned as enemy aliens. In June 1940 as the German army advanced towards Paris, Helen and Elizabeth joined the flood of refugees heading south. Helen hitched rides while Elizabeth traveled by bicycle. It was difficult for them to meet up as they planned during their flight, and for periods of time they lost track of one another. They also did not know where to find Fritz and Peter. Eventually, Elizabeth found her brother in Toulouse, discovered that her father was in a camp near Limoges and learned that her mother was working in Pau. After reuniting with her mother, the two women joined Fritz near Limoges. Peter was arrested soon after his meeting with Elizabeth and sent to another internment camp. While Fritz explored avenues of escape for the family, he received a letter from a Viennese friend (and former teacher of Elizabeth's), Hilde Hoefert, who had lived with the family briefly in Paris before taking a job teaching German in the village of Le Chambon-sur-Lignon. She offered to find work for Elizabeth in the village. The family accepted her offer, and Elizabeth moved to Le Chambon. She was given a job caring for the children of Pastor André Trocmé and lived with the family during the summer of 1941. At the end of the summer Pastor Trocmé asked Elizabeth to move to the Secours Suisse aux enfants children's home in Le Chambon, called La Guespy, to help take care of a group of German Jewish refugee children who were being transferred from the Gurs internment camp. Throughout the fall Elizabeth assisted the director, Dr. Juliette Usach, in caring for approximately thirty children between the ages of 6 and 17. While Elizabeth was living in Le Chambon, her father was contacted by Varian Fry of the Emergency Rescue Committee, who offered him a non-quota American visa as one of the endangered, anti-Nazi European refugee intellectuals caught in Vichy France. Visas also were arranged for the rest of the family. Elizabeth was then contacted and instructed to meet the family in Lyon. The Kaufmanns were issued their visas just prior to the bombing of Pearl Harbor in December 1941. From Lyon they traveled to Marseilles, crossed the border into Spain and then into Portugal. They sailed from Lisbon to the U.S. in February 1942 aboard the SS Nyassa. Soon after their arrival, Peter was inducted into the American army and sent to Europe. He was killed in France in 1945.