A group being smuggled out of France plows through snowdrifts on a rugged mountain pass in the Pyrenees. The group was rescuted with the help of John Weidner's Dutch-Paris network. 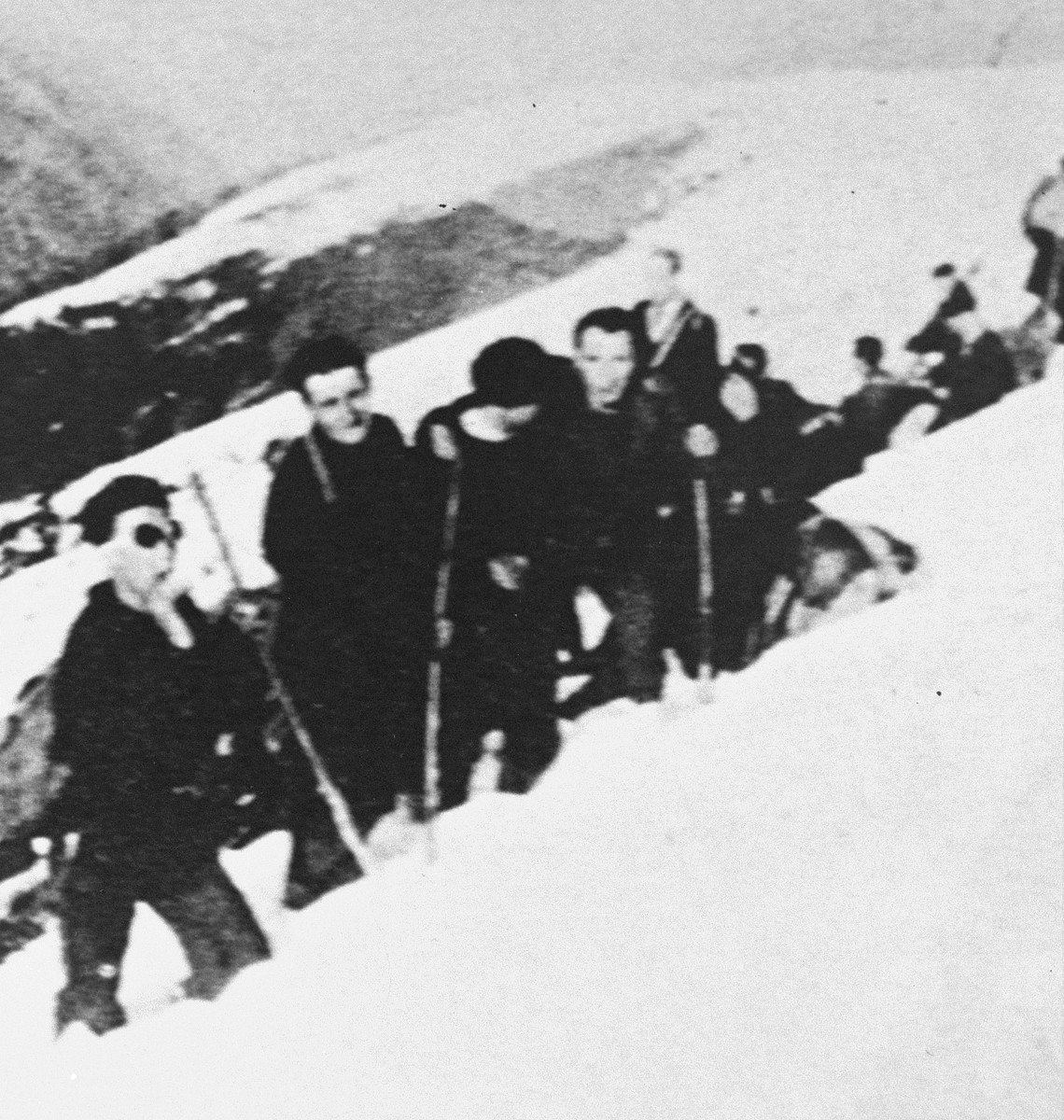 A group being smuggled out of France plows through snowdrifts on a rugged mountain pass in the Pyrenees. The group was rescuted with the help of John Weidner's Dutch-Paris network.

Biography
John Henry Weidner (1912-1994), a Dutch Seventh Day Adventist who during World War II headed a rescue operation code-named "Dutch-Paris," that smuggled more than 800 Jews and political refugees and 100 Allied airmen out of France to Switzerland and Spain. The son of an Adventist minister, Weidner attended an Adventist college in the French town of Collonges, just across the Swiss border from Geneva. He was an experienced skier who had a detailed knowledge of the region. In 1940 Weidner was in the textile business in Lyon. After the French began to incarcerate Jews in Vichy internment camps and then hand them over to the Germans for deportation, Weidner began smuggling Dutch Jews out of the camps and escorting them to safety in Switzerland. He encouraged family members and friends to join his rescue mission, and the network soon grew very large. Eventually, the "Dutch-Paris" network became the recipient of funds from the World Council of Churches in Geneva and the Dutch government-in-exile. Weidner's college on the Swiss border became the staging ground for many of these surreptitious crossings. Some of the people he helped had to be smuggled over the mountains to Spain. These included members of the Dutch resistance and Allied airmen who needed to get to England. Crossing the Spanish border was more difficult, so nearly all the Jewish refugees were taken to Switzerland. Weidner's network soon became known to the Gestapo, and one day one their members was captured with a notebook listing the names and addresses of all of their agents. Within a few days, 150 people were arrested, including Weidner's sister, who later died in Ravensbrueck. Weidner was also arrested at one point and tortured, but did not reveal any information. After the war Weidner was asked by the Dutch government to help identify Dutch collaborators and determine their punishment. In addition, he was assigned the task of decorating members of the Dutch underground and identifying the families of those who had died in action. He did this for three years and then returned to France to resume his textile business. In 1958 Weidner immigrated to the United States in order to distance himself from the places that brought back sad memories. He received numerous honors including that of the Righteous Among the Nations.