Jewish pharmacists at work in the only pharmacy in the Kovno ghetto. 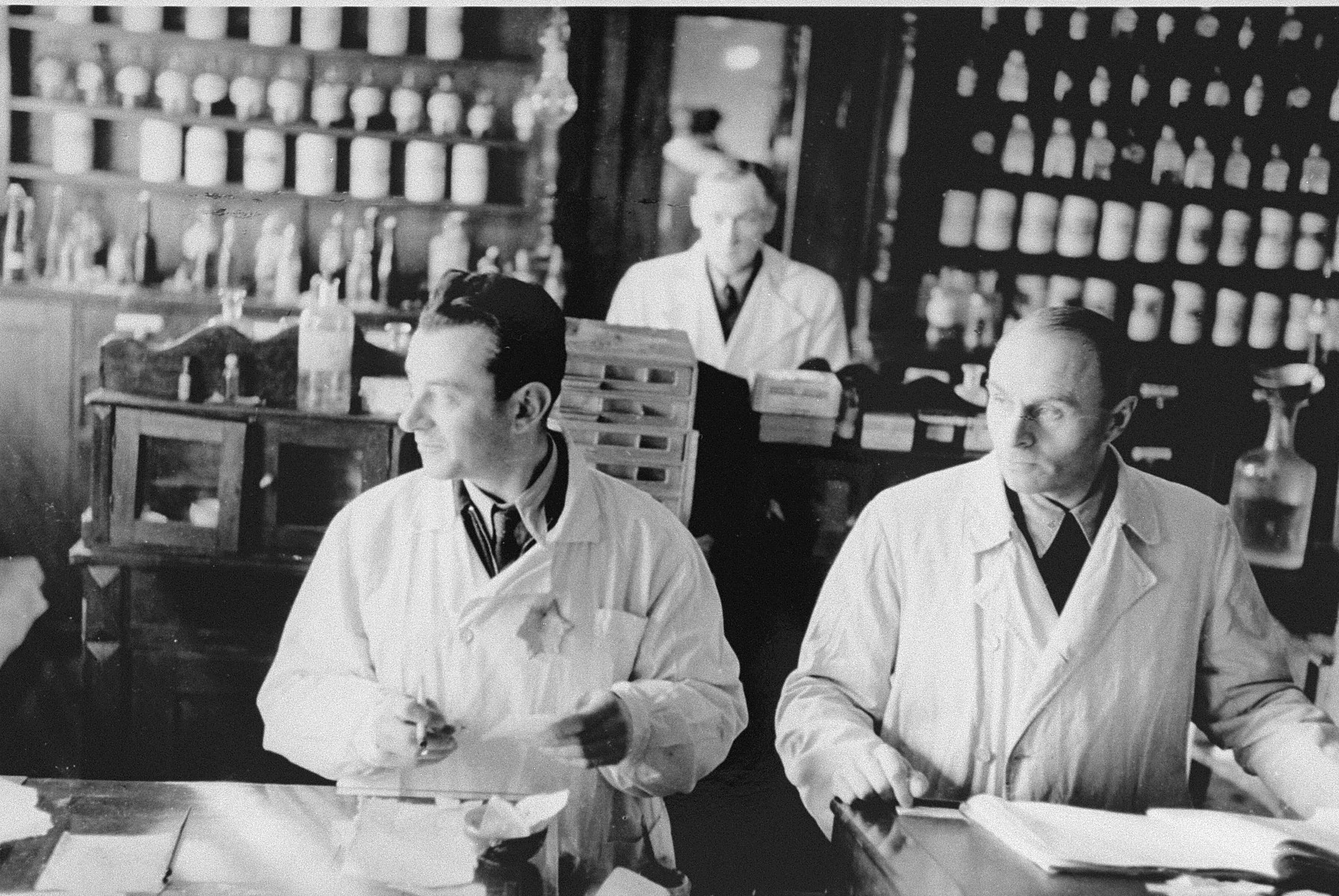 Jewish pharmacists at work in the only pharmacy in the Kovno ghetto.

Among those pictured are head pharmacist Aizik Srebnitzki (left), and N. Segalsohn (from Memel).

Aizik Srebnitzki, who was active in the ghetto's Zionist underground, kept a clandestine radio in the basement of the pharmacy for use by the underground.

Event History
The Kovno ghetto, with a population of 17,000, was allotted only 50 sets of medication per month, by order of Stadtkommisar Cramer, October 13, 1942. The pharmacists, therefore, had to buy medicine on the black market and smuggle it into the ghetto illegally to care for the population sufficiently. Gestapo suspicions of these illegal medications caused considerable worry in the ghetto in May, 1943. The ghetto was spared punishment due to the refusal of the Wintzer, the German black marketeer's, refusal to implicate the ghetto for fear that his punishment would be greater if the Gestapo learned that his customers were Jews.

At the creation of the ghetto, the Jewish council led by Dr. Elkhanan Elkes, formerly chairman of the Jewish hospital's department of internal medicine, established medical clinics, an old age home and an orphanage. Though over 130 physicians were imprisoned within the ghetto, only 11 were issued passes permitting them to work in their profession. Others worked unofficially. Dr. Benjamin Zacharin headed the ghetto's hospital and health department. They cared for a malnourished population of 17,000 with limited equipment and medicine hidden from the Germans or smuggled in on the black market. On October 4, 1941, the third German police force and Lithuanian collaborators hammered shut and set fire to the hospital for infectious disease killing the 67 patients and doctors inside. Though the community rebuilt a new general hospital, it decided that it would be suicidal to openly treat infectious disease. They feared the Germans would use the discovery of an epidemic as an excuse to liquidate the entire ghetto. The health department's sanitation section, led by Dr. Moses Brauns, worked to prevent the outbreak and spread of contagious disease and treated the few isolated cases of typhus under the code-name, "Spanish flu". Doctors, in conjunction with policemen, enforced strict sanitation codes and threw offenders in jail in order to prevent the outbreak of disease. Ghetto residents had to report regularly for delousing in the ghetto's bathhouse. Because the survival of the ghetto depended on the community's ability to work, the medical community's first priority was keeping the residents fit for labor. Dr. Nachimowski was responsible for granting medical exemptions from hard labor. His 1943 report, originally delivered in a ghetto medical symposium, is a seminal work on the effects of hard labor on the human body. He spent much of his time treating workers' foot ailments caused by walking great distances to work in inadequate footwear. In July 1942, SS Sergeant Helmut Rauca ordered that all pregnancies be terminated and that pregnant women would be shot. Ghetto obstetricians, therefore, performed abortions to save the mothers' lives. Other ghetto doctors hid healthy orphans in the ghetto hospital in order to protect them from deportation or death.