At a postwar ceremony in Holland, Jews who were rescued by Arie van Mansum during the German occupation, present him with a portrait and a certificate listing the names of those he saved. 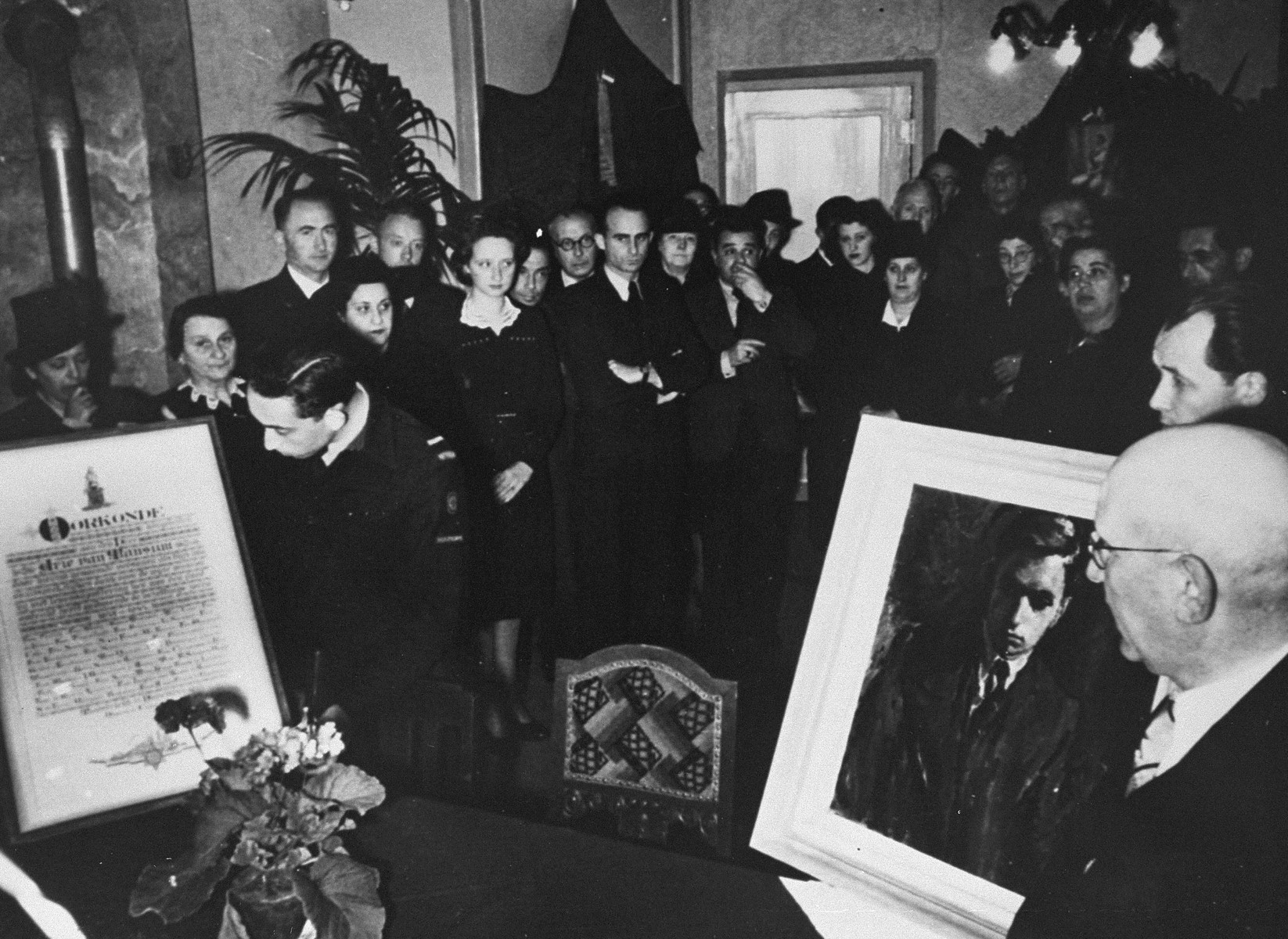 At a postwar ceremony in Holland, Jews who were rescued by Arie van Mansum during the German occupation, present him with a portrait and a certificate listing the names of those he saved.

Biography
Arie van Mansum (1920- ), a member of the Dutch underground who helped save hundreds of Jews living in Holland during the German occupation, by finding them hiding places and providing them with ration cards. The son of a railway worker, van Mansum grew up in Maastricht, where he was active in the Reform Church of the Netherlands. In 1939, he represented his church at a meeting that took place at City Hall to decide how to help the refugees coming in from Germany. When the Germans invaded Holland in May 1940, van Mansum was working as a traveling salesman for a wholesale wallpaper company. His first involvement with the underground came about when a member of his church asked him to distribute the underground newspaper, "Free Netherlands" during his business trips. Later, an elder in the church asked him to escort a Jewish family to their hiding place, and soon after, to find shelter for another Jewish family , the Freilichs. When van Mansum realized that the Freilich's son, Fritz, would not be able to pass as a non-Jew, he brought him home to his parents to hide. Through the Freilichs, van Mansum came into contact with more Jewish families who needed places to hide and ration cards to sustain them. The ever-greater demand for ration cards led van Mansum to seek out sympathetic insiders in the food stamp office and ultimately, in the police department. In 1942 or 1943, van Mansum was contacted by a group of Dutch students from Amsterdam to find hiding places for young Jewish children whom the students were smuggling away, a few at a time, from an assembly point at a Jewish nursery and theater in the ghetto. He found them places to stay in southern Holland. In addition, he arranged for a nurse to smuggle a young boy out of a hospital in Amsterdam who was about to be sent to Westerbork. Another time, van Mansum and his girlfriend picked-up an eleven-day-old Jewish baby and brought it to his mother for safekeeping. Van Mansum was still living at home at the time and his parents and sister, Margaretha, helped him in his rescue missions. Soon van Mansum was so busy with rescue work that he had to give up his regular job. In October 1943, van Mansum was arrested and put in solitary confinement for six months at a prison in Haeren. From there, he was sent to the Amersfoort concentration camp until September 1944. During this period, Margaretha took over his work with the hidden Jewish families. Van Mansum was released from prison in Utrecht when that area was liberated by the Allies. Because Maastricht was still occupied, he remained in Utrecht with an aunt and resumed his work for the underground. He was delivering copies of the "Free Netherlands" when he was again arrested in February 1945 and sent back to the concentration camp. He remained there until the final liberation of Holland. After the war, van Mansum moved to Canada. Like other members of the Dutch resistance, he grew disillusioned when he saw collaborators rise to prominent positions in the new Dutch government and bureacracy. Van Mansum kept in touch with many of the Jews he saved and in 1970 was recognized by Yad Vashem as one of the Righteous Among the Nations.