German Jewish youth who are members of a hachshara (Zionist collective) at the Westerbork internment camp, dance the hora. 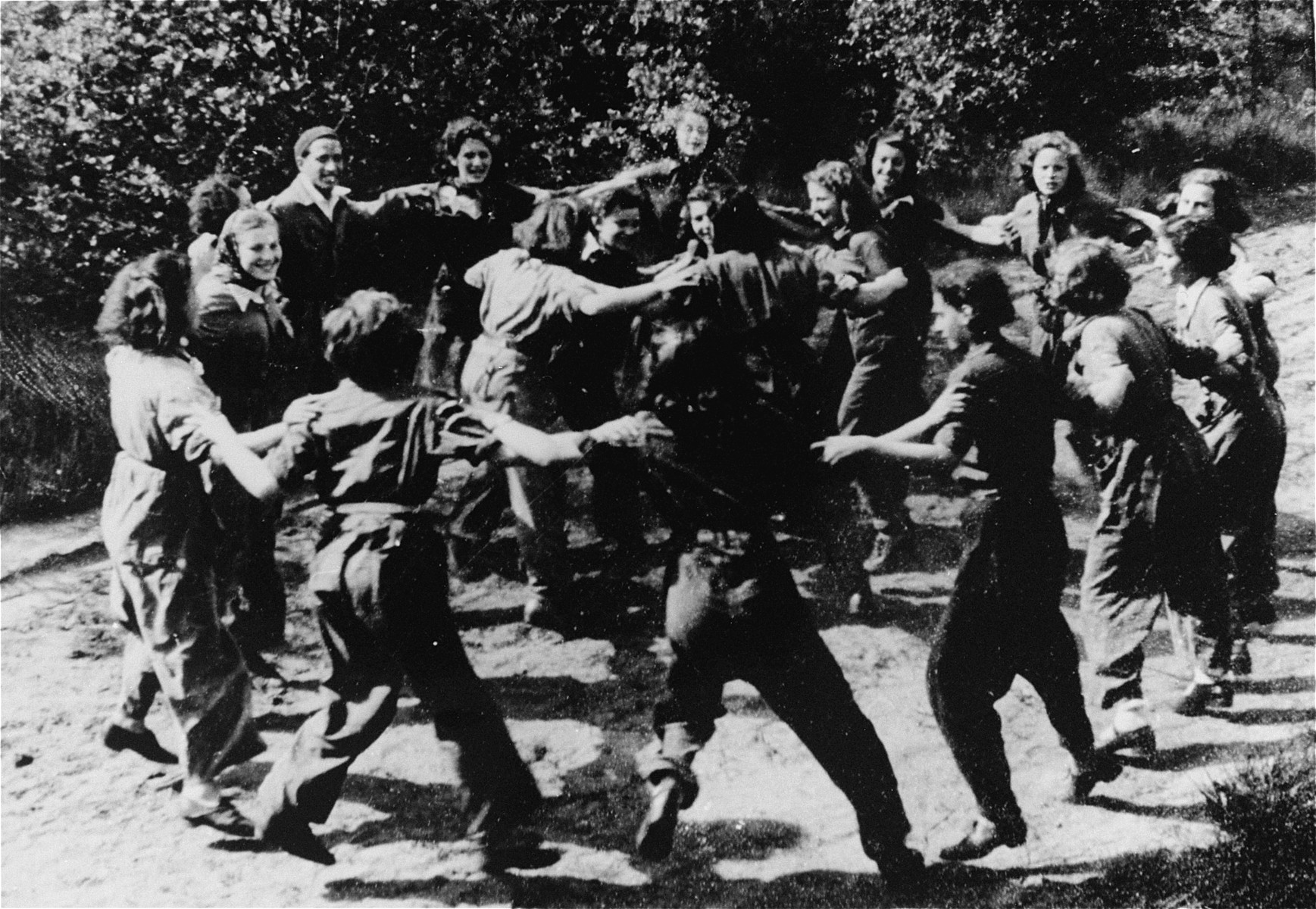 German Jewish youth who are members of a hachshara (Zionist collective) at the Westerbork internment camp, dance the hora.

Event History
On October 3, 1942 a Zionist collective called the Elden hachshara was established in Westerbork. It quickly grew to approximately 150 members by the end of 1942. The members performed agricultural work outside the main camp. They wore armbands with an "S" marking which stood for Sonder (special), indicating their special status within the camp. Some managed to qualify themselves for special Red Cross certificates allowing them to become part of the Palestine Exchange. This group was transferred to Bergen-Belsen in 1944 and from there, were taken to Palestine.
Westerbork was a transit camp for Jews who were being deported from the Netherlands during World War II to killing centers in Poland. The camp was initially established in October 1939 by the Dutch government to house Jewish refugees who had entered the country illegally. It was constructed on a tract of heath and marshland on the outskirts of the village of Westerbork in the province of Drenthe. Initially 50 barracks were erected to house 1800 refugees. When the Germans invaded Holland on May 10, 1940, 750 refugees were still living there. They were temporarily moved to Leeuwarden during the initial weeks of the occupation before being returned to Westerbork. On July 16 Captain Jacques Schol of the demobilized Dutch Army Reserves was appointed director of the camp. He organized the refugees into work groups and service branches and appointed Jewish internees to head them. Kurt Schlesinger was appointed chief of the service branches, Dr. Fritz Spanier, chief medical officer, and Arthur Pisk, head of the Ordnungsdienst, which evolved from being a fire brigade to an internal Jewish police force. Over time, refugees from other camps were moved into Westerbork, and by 1941 the camp had a population of 1,100. During the first two years of Nazi occupation the refugees were not yet treated as prisoners, and they could leave the camp if they obtained travel permits. However, on July 1, 1942, Westerbork came under the jurisdiction of the German SD (security police) and officially became a transit camp for Jews and Roma slated for deportation to Poland. The camp was headed by a series of commandants: SS Sturmbannfuehrer Erich Deppner (July-September 1942), SS Obersturmbannfuehrer Josef Hugo Dischner (September-October 1942) SS Obersturmbannfuehrer Albert Konrad Gemmeker (October 1942-April 1945). The systematic transfer to Westerbork of Jews from all parts of the Netherlands was launched on July 14, 1942, and deportations to Poland began the following day. The commandants left in the hands of the Jewish camp leadership the responsibility of compiling the lists of those to be deported. The leadership, however, was not allowed to include camp residents who had been given an official exemption. These included Jews of foreign nationality and, in particular, the veteran inmates, numbering 2,000, who had been given special status about two weeks before the deportations commenced. Thus Westerbork led a dual existence: inmates in the permanent camp remained in place for a long time, lived a relatively comfortable existence, enjoyed a wide range of cultural activities (including concerts, operas, and cabaret performances) and largely ran their own affairs, while the majority of prisoners remained only a week or two before being dispatched to Poland. An estimated 102,000 Jews and a few hundred Roma were processed through Westerbork. Roughly 55% were sent to Auschwitz, 35% to Sobibor, and 5% each to Theresienstadt and Bergen-Belsen. After the last transport had departed on September 13, 1944, approximately 600 Jews remained behind. Westerbork was liberated by the South Saskatchewan Regiment of the Canadian army on April 12, 1945.