A young Jewish DP girl poses with a doll and toy stroller in the Feldafing displaced persons camp. 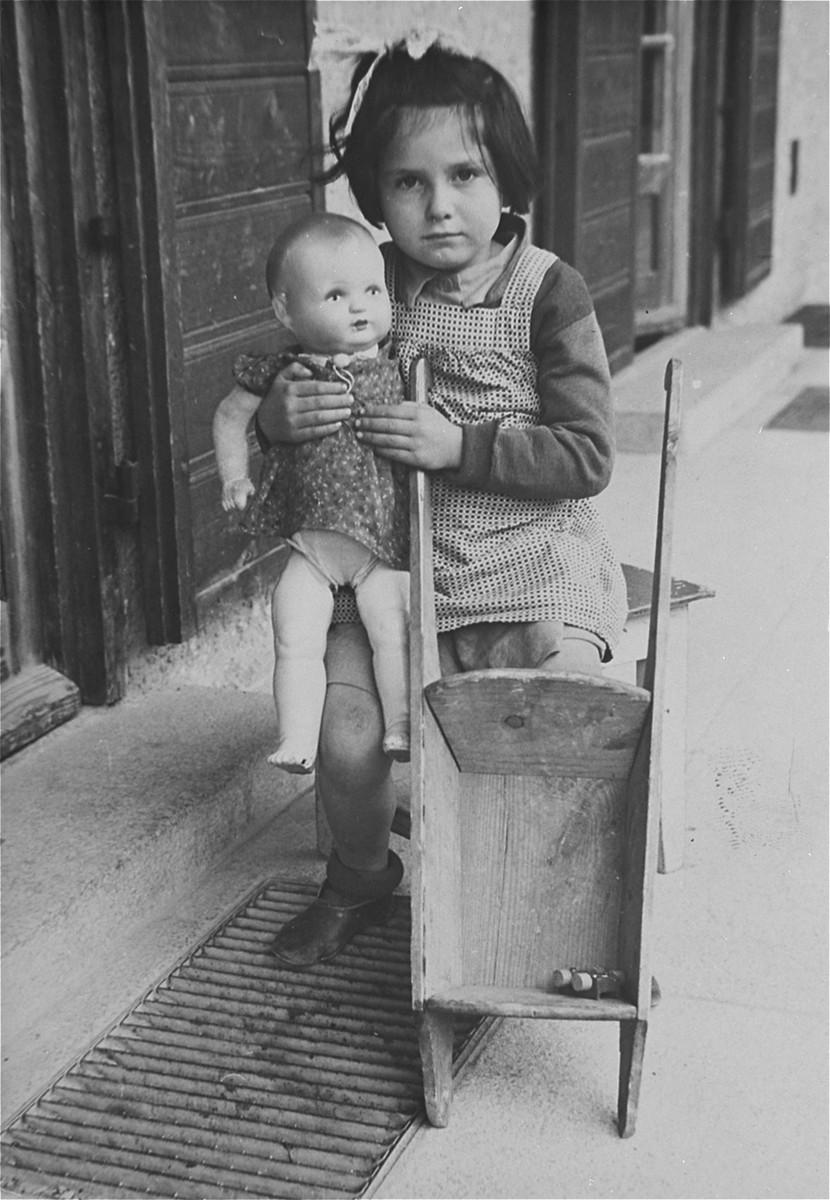 A young Jewish DP girl poses with a doll and toy stroller in the Feldafing displaced persons camp.

Biography
Rosalyn Kirkel (born Reisele Kirkel) is the daughter of Frida (Margolis) and Avrahom (Tsale) Kirkel. She was born on April 13, 1941 in Siauliai, Lithuania, where her parents operated a barber and beautician shop. She had two older siblings, Leja (b. 1934) and Leibel (b. 1939). On June 22, 1941, when Reisele was only two months old, Germany launched a surprise attack on the Soviet Union and invaded Lithuania. The Kirkel family tried to escape in advance of the German army, but they were turned back at the border. After surviving the initial waves of mass shootings that took place in the first weeks of the German occupation, the family was forced into the Kavcaz ghetto, the smaller of the two Siauliai ghettos, in mid-August. Later, when this ghetto was eliminated, they were moved into the larger, Traku ghetto. On November 5, 1943 the Nazis and their collaborators conducted a children's action in the ghetto, during which both the young and the elderly were rounded-up for deportation. Frida got wind of the action in advance and hid her three children in the attic before leaving for work. Though Reisele and Leja remained safely hidden, Leibel was discovered and deported to his death along with more than 570 other children. Frida collapsed when she returned to find that her son had been taken. As no children were supposed to be living in the ghetto after the children's action, Frida became desperate to find a hiding place for Reisele. A Jewish widow who was living in the ghetto used her connections to help the Kirkels make contact with a Lithuanian woman named Elena Yakubitiene. Elena and her husband, who were unable to have children, took care of Reisele as if she were their own child for the next two-and-a-half years. Reisele's parents and sister remained in the ghetto for eight more months until it was liquidated by the Germans in July 1944, just prior to the arrival of the Soviet army. During the evacuation of the ghetto the Jews were rounded-up and transported to Stutthof. Soon after, Frida and Leja were sent to Auschwitz, where they were gassed upon arrival. Avrahom was sent to Dachau, where he remained until his liberation in May 1945. After the war Avrahom moved to the Feldafing displaced persons camp. Towards the end of 1945, he went back to Lithuania to find Reisele. Because he had no official travel documents, it took him three months to get there. When he arrived in February 1946, he found that his daughter no longer had any memory of him, and that the Yakubitienes did not want to relinquish the child they had unofficially adopted. Avrahom was only able to regain custody with the intervention of the NKVD. Reisele tried to run away from her father whom she felt was taking her away from her real parents, but he ultimately succeeded in bringing her back with him to the Feldafing DP camp after another three-month journey. Avrahom remarried in Feldafing, and the three immigrated to the United States in the spring of 1949.