An obituary notice in the Badische Presse for Ludwig Marum. 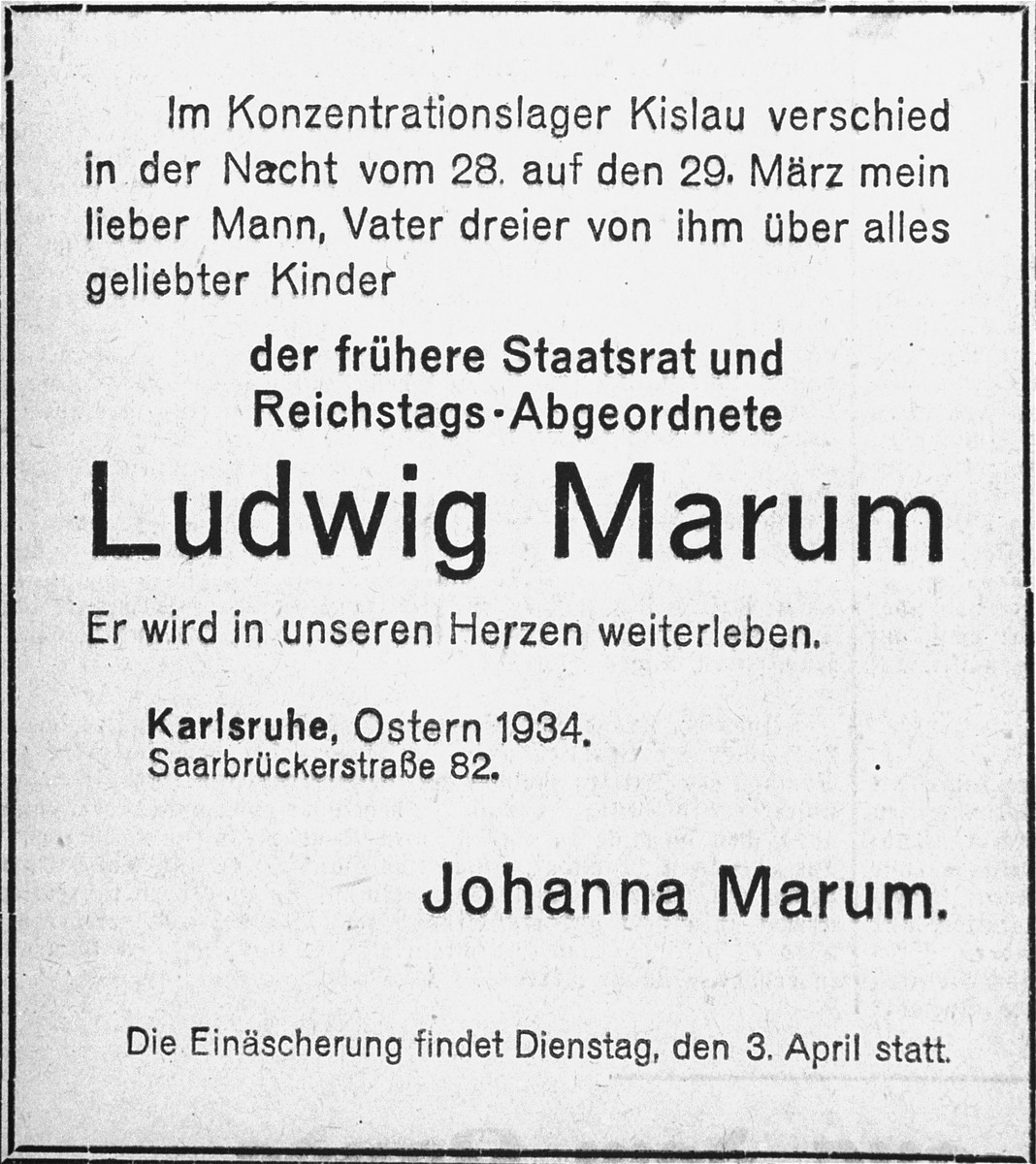 An obituary notice in the Badische Presse for Ludwig Marum.

The notice reads: "In the Kissau concentration camp on the night of March 28-29, 1934, my dear husband, father of three beloved children died -- former state councillor and member of Parliament: Ludwig Marum, who will always remain in our hearts. The cremation will take place on Tuesday April 3, 1934."

Biography
Ludwig Marum was the son of Karl and Helene (Mayer) Marum. He was born November 11, 1882 in Frankenthal, Germany, where the family had lived for several generations. His father ran a store. Following Karl's sudden death in May 1889, Helene and Ludwig moved to Bruchsal, where they lived with Helene's sister. There Ludwig attended the gymnasium, graduating in 1900. Shortly thereafter, he began studying law at the Universities of Heidelberg and Munich. Following completion of his studies in 1904, Ludwig started working for various courts and agencies in Bruchsal and Karlsruhe. He also joined the SPD (German Socialist Party) and became very active in the organization. In 1910 he married Johanna Benedick in her hometown of Albersweiler. The couple went on to have three children, Elisabeth (b. 1910), Hans (b. 1913) and Eva Brigitte (b. 1919). In 1911 Ludwig was elected to the Karlsruhe city council, a post which he maintained for three years, until his election to the Baden Landestag (state legislature). During his term, Ludwig enlisted in the German army reserve to fulfill his required military service. Following the conclusion of World War I, he was named leader of the SPD in Baden and Minister of Justice in the provisional Weimar government. A short time later, in April 1919, Ludwig was appointed Reich's Minister without Portfolio. From 1928 to 1933 he was re-elected five times to the Reichstag. A well-known opponent of the Nazi Party (who was also of Jewish origin), Ludwig, was arrested on March 8, 1933 in Karlsruhe. On May 16, he and several other political prisoners were driven through the streets of Karlsruhe on their way to the Kislau concentration camp. Ludwig was murdered at Kislau on March 31, 1934. Johanna, Elisabeth and Hans eventually emigrated to the Americas. Eva, however, perished in Sobibor.