Two Jewish youth who are posing as Poles stand outside in a doorway on the Aryan side of Warsaw. 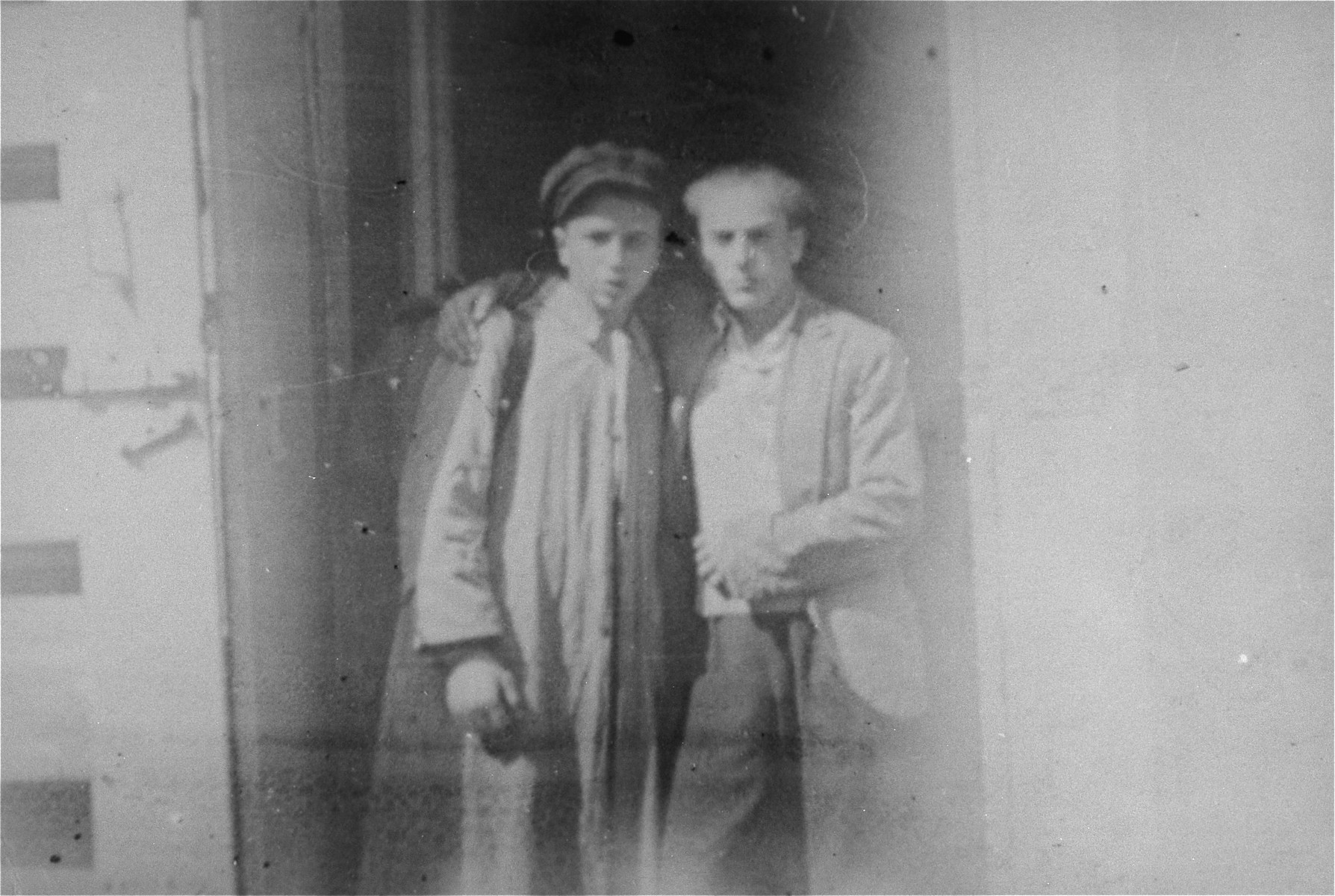 Two Jewish youth who are posing as Poles stand outside in a doorway on the Aryan side of Warsaw.

Pictured are Ignacy (Byczek) Milchberg (left) and Izaak (Zbyszek) Grynberg (right), two of a group of 20 Jewish children who were living in hiding on the Aryan side of Warsaw and supporting themselves by selling cigarettes in Three Crosses Square.

Event History
The Cigarette Sellers of Three Crosses Square were a group of Jewish children who, having escaped from the Warsaw ghetto in 1942 and 1943, maintained themselves in hiding on the Aryan side by selling cigarettes and other items in one of the main squares of Warsaw. Many of the children (who numbered close to 20 by the spring of 1944) had been involved in the smuggling of food into the ghetto while they still lived there with their families. As the situation deteriorated and hunger and disease became widespread, these children spent more and more time on the Aryan side seeking the means to feed their families. Some of the children were caught on the Aryan side when the Germans launched their massive deportation campaign of July-September 1942. All of the children lost most, if not all, of their families during the actions, and came to the realization that they had only themselves to rely upon. The individual children met up by chance and through acquaintances over the course of a two-year period from the spring of 1942 until the spring of 1944. They survived initially by begging and the largess of a few Polish widows, who took pity on them and intermittently offered them food and shelter. But later the children established themselves as street-wise vendors in one of the busiest sections of Warsaw. For much of the period many of them lived together in one or two lodgings or dens, but threats of exposure often forced them to seek shelter in the ruins of buildings, cellars, attics and even cemeteries for days or weeks on end. There were several turning points in the history of the cigarette sellers. The first came in August 1942 when the initial group of children came into contact with a group of Jewish forced laborers from the ghetto who were working at a German-owned lumber yard called Omnium on the Aryan side. The Jewish laborers, and especially the youngest among them --15-year-old Ignacy Milchberg-- took the children under their wing and gave them food, clothing, money and gifts for their Polish landlady. The children visited the lumberyard most days until January 1943, when it was closed down and most of its workers deported. The second turning point occurred in May 1943 when one of the children, Teresa, met two other girls from the ghetto who were supporting themselves in hiding by singing on the street in Three Crosses Square. The girls suggested to Teresa that she and her friends follow the example of several Polish boys who were earning a tidy sum selling cigarettes in the same square. The Jewish children followed this advice, and within a short period of time, became savvy street vendors. The next important event took place in the summer of 1943 when Ignacy Milchberg ran into the cigarette sellers in Three Crosses Square. In the months since he had last seen them, Milchberg had narrowly escaped death in the ghetto uprising and deportation to the Poniatowa concentration camp. Having now exhausted all his sources of support in Warsaw, Milchberg joined the cigarette sellers, moved into their den and, as the oldest member, quickly assumed leadership of the group. The final turning point occurred in October 1943 when two of the children chanced to meet Joseph Ziemian, a member of the Jewish National Committee, the coordinating council of the organized Jewish resistance in Warsaw, in a soup kitchen in Warsaw. Ziemian was astonished to learn of the existence of a group of young Jewish orphans living on their own in Aryan Warsaw and immediately began to funnel them support from the committee. At first this support took the form of money and items of clothing, but later, involved finding emergency lodgings and false identity papers and school identity cards. The cigarette sellers were in constant danger of harassment, blackmail and arrest by Polish informers and Polish and German police. In 1944 they lost two of their members. Josef Szindler (b. 1928) was arrested during the winter, and Kazik Gelblum (b. 1929) was lured into capture in the spring. Following Gelblum's arrest in May, the group was forced to disband. They abandoned their haunt at Three Crosses Square and their two major dens, lest their friend reveal their whereabouts under torture. The children split up into ones and twos, and after that came together only for occasional meetings in the streets or at the river. Nearly all of them took an active role in the Warsaw Uprising of August-September 1944. After the German army quashed the insurgency, many of the former cigarette sellers were evacuated along with the Polish soldiers to POW camps in Germany. They were then concentrated in a couple of Stalags for youthful prisoners at Brockwitz and Oberlangen, where they suffered intense harassment for being Jews by their erstwhile comrades-in-arms. The children were liberated in the first week of May 1945 and immediately returned to Warsaw, where they soon went their separate ways. Most eventually immigrated to Palestine/Israel, while some remained in Poland, and one or two each settled in Canada, the U.S., Australia, Argentina and Brazil. The information about the cigarette sellers was preserved in the form of notes written by Joseph Ziemian during his involvement with the Jewish National Committee. At the beginning of the Warsaw Uprising Ziemian concealed these notes in a subterranean hiding place, from which he recovered them soon after the liberation.