Three Jewish youth pose outside in the Dabrowa Gornicza ghetto. 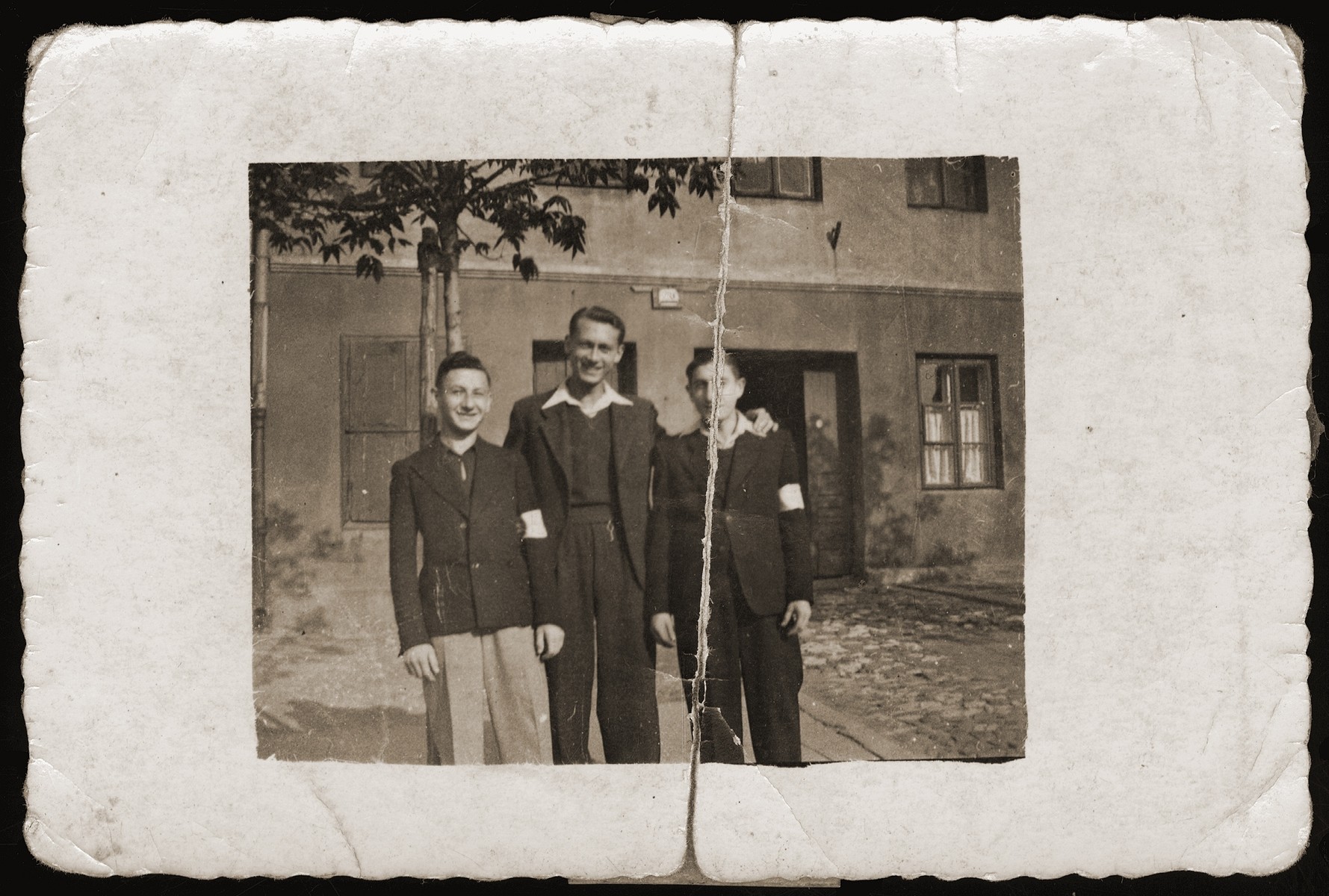 Three Jewish youth pose outside in the Dabrowa Gornicza ghetto.

Pictured from right to left are: Moniek Rozen, Moniek Najfeld and Moniek Szeps.

https://encyclopedia.ushmm.org/content/en/article/german-administration-of-poland. https://encyclopedia.ushmm.org/content/en/article/ghettos-in-poland.
Biography
Morris Rosen (born Moniek Rozen) is the son of Jakub Rozen and his second wife, Golda Chaja Warszawska. He was born October 11, 1922 in Dabrowa Gornicza, where his father worked as the official distributor of two state-controlled commodities, tobacco and acetylene. Moniek had two siblings: Josek (b. 1924) and Bluma (b. 1926), and eight half-brothers and sisters from his father's first marriage to Pola Frochwajg (who died in 1919): Leosia (b. 1898), Yehiel (b. 1900), Yitzhak (b. 1902), Rubin (b. 1905), Rozka (b. 1913), Israel (b. 1914), Ruchcia (b. 1912), Sala (b. 1917) and Tamara (b. 1918). After the Germans occupied Poland, the Rozens remained in Dabrowa. In August 1942 Moniek's parents were deported to their death in Auschwitz. At the time of their deportation Moniek and two of his brothers, Srulek and Josek, were at the Mittelstrasse labor camp in Dabrowa. In October 1942 Moniek was transferred to the Szczakowa [perhaps Szczepankowo] labor camp, where he worked in a leather workshop. A year later he was moved to the Annaberg labor camp and then to Gruenberg, where he worked in a textile factory. While in Gruenberg, Moniek was temporarily reunited with his sister Bluma. He remained there until April 1944, when he was transferred to the Kretschamberg labor camp. When this camp was evacuated in February 1945, Moniek was sent on a forced march to Buchenwald that lasted six weeks. Soon after his arrival, Moniek was transferred to Theresienstadt, where he was liberated by the Soviets on May 6, 1945. Moniek's brother-in-law, Szabtai Klugman, discovered him in Theresienstadt, and together they went in search of surviving relatives. Szabtai's wife (Moniek's older sister) Leosia was killed on a death march just days before liberation. In the course of their search, they encountered a group of young women from Dabrowa, who had barely survived a death march from the Helmbrechts factory camp in Muenchberg, Germany to the town of Volary in Bohemia. After locating his surviving siblings, Moniek went to live at the New Palestine displaced persons camp near Salzburg, Austria. He immigrated to the United States in September 1949 and settled in Baltimore. Of the eleven Rozen children, five perished during the war. Of the six who survived, one moved to America before the war, one fled to the Soviet Union, and the other four lived through ghettos, labor camps, concentration camps, and death marches.

Moniek Szeps (now Moshe Sheps) is the son of Abraham and Chava (Wohlhandler) Szeps. He was born January 6, 1923 in Dabrowa Gornicza, Poland, where his father was a cigarette manufacturer and his mother, a wigmaker. Moniek had two sisters: Fela (b. 1918) and Sabina (now Bat-Sheva Admoni, b. 1921). Moniek attended a cheder (a religious primary school for boys) and later, the Yavneh Hebrew elementary school in nearby Bedzin. At age eleven, he joined the Hashomer Hadati religious Zionist youth movement and participated in meetings and summer camps organized by the Mizrachi movement. He attended high school at the Fuerstenberg gymnasium, a private, co-educational Hebrew language school in Bedzin. Soon after the German invasion in September 1939, the Szeps family was forced to move to an area of town that was to become the ghetto. Moniek went to work at the local city hall and was given a special work permit that exempted him from resettlement. Going to work everyday outside the ghetto afforded him the opportunity to purchase tobacco for his father's cigarette making workshop and food items for the family. Moniek's sisters both found work at the Rosner factory, which produced military uniforms. On February 7, 1942 both girls were deported to the Gruenberg labor camp. There they worked for the Deutsche Wollwaren [German Woolens] company until April 1945. During their years in the camp they kept a diary, which they wrote on scraps of paper and kept in a cloth pouch. In the final months of the war Fela and Sabina were evacuated and put on a death march that led first to the Helmbrechts concentration camp and ultimately ended in Volary, Czechoslovakia. Fela died in Volary on May 9, 1945, a few days after their liberation. Sabina survived. Five months after the sisters were sent to the Gruenberg camp, the Dabrowa Gornicza ghetto was liquidated and Moniek's parents were deported to their death in Auschwitz. Moniek, who was 19 years old at the time, took it upon himself to send letters and food packages to his sisters in Gruenberg, despite regulations which forbade him to do so. In March 1943 while Moniek was preparing to escape from Dabrowa, he was arrested and interned in the Dulag, the transit camp located in neighboring Sosnowiec. From there he was sent to the Blechhammer labor camp. Subsequently, he was transferred to Bunzlau, a subcamp of Gross Rosen, where he was put to work for the Hubert Land Holzbau [wood construction] company. Moniek remained in Bunzlau until the camp was evacuated in February 1945. He was then taken to the Dora Mittelbau concentration camp. He was finally liberated in Bergen-Belsen on April 15, 1945. Throughout his imprisonment, Moniek kept a few family photographs concealed on his body. While he was convalescing from typhus in a British field hospital after the war, his friend, Motek Nussbaum, took care of his photographs. Moniek and Sabina were reunited at a displaced persons camp in Salzburg. Moniek later joined in the establishment of a kibbutz hachshara [Zionist collective] on an estate in Geringshof, Germany near Fulda. It was named Kibbutz Buchenwald, and there Moniek studied agriculture in preparation for immigration to Palestine. Subsequently Moniek, and his future wife, Zahava Zilberstein, boarded an illegal immigrant ship for Palestine. The ship was intercepted by the British and its passengers sent to detention camps in Cyprus. Eventually the Szeps reached Palestine. Sabina also immigrated to Palestine. She married Oskar Rotman (later Yehoshua Admoni) from Stanislawow.