Baby picture of Hessy Levinsons, the Jewish winner of the most beautiful Aryan baby contest, published on the cover of the German publication, "Sonne ins Haus: Illustrierte Familienzeitschrift mit Versicherung." 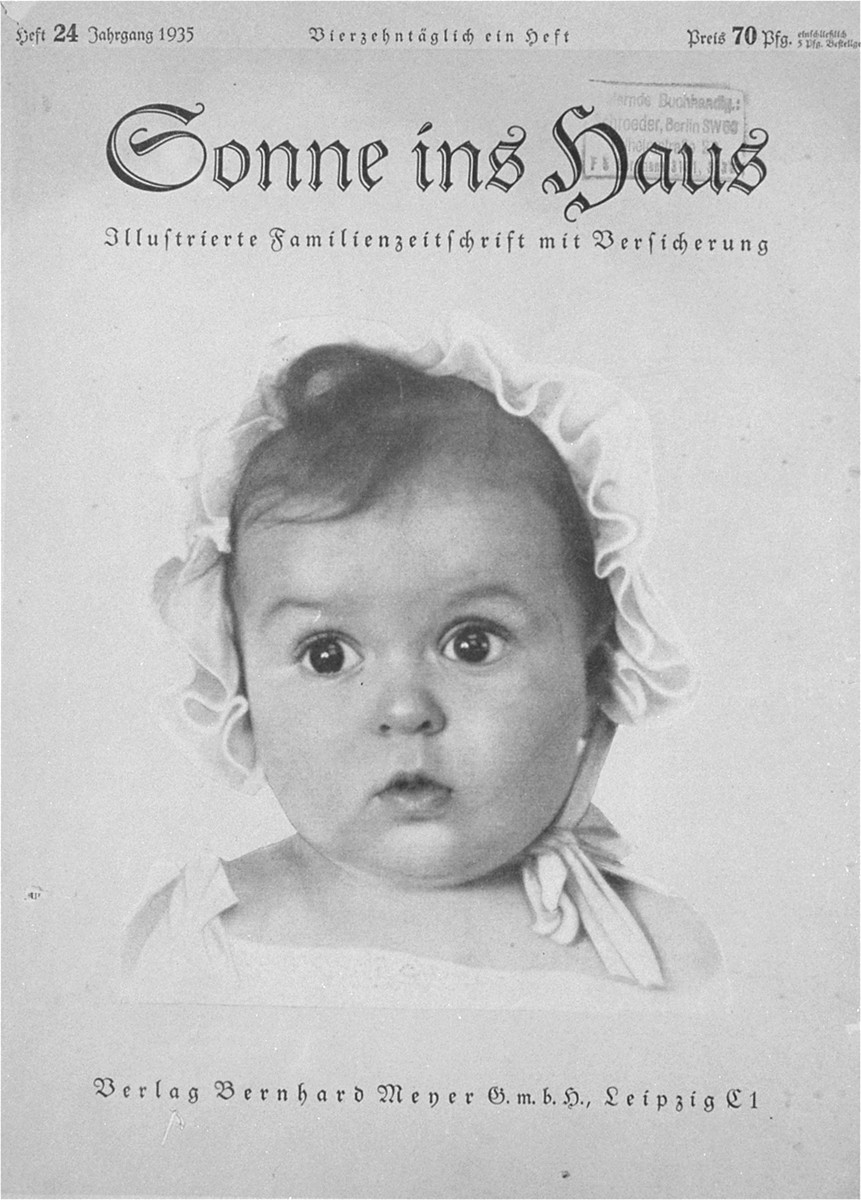 Baby picture of Hessy Levinsons, the Jewish winner of the most beautiful Aryan baby contest, published on the cover of the German publication, "Sonne ins Haus: Illustrierte Familienzeitschrift mit Versicherung."

Biography
Hessy Levinsons (now Hessy Levinsons Taft) is the older daughter of Jacob and Pauline (Levine) Levinsons, both talented singers who came from Latvia to Berlin in the 1920s and studied voice at the Hochscule fuer Musik. The two were married in 1928 in Latvia but returned to Berlin to pursue their careers. In 1932, using his legal stage name, Yasha Lenssen, Jacob signed a contract with the Breslau opera to perform as their leading baritone in a series of 19 operas. However, shortly before the season opened, his contract was abruptly cancelled when he was asked to add his original surname to the agreement, a name that immediately identified him as a Jew. After Hitler's rise to power, the Levinsons were increasingly uneasy about their prospects for the future. They turned for advice to the Latvian consul in Berlin, who assured them Hitler would not last long and predicted a flourishing musical career for them after his demise. As foreigners, the Levinsons were somewhat protected from the anti-Jewish economic legislation that was directed against German Jews. Thus Jacob was able to secure a position as the Berlin representative of a Latvian-based firm.

Hessy Levinsons was born in 1934. When she was six months old, Hessy was taken to a leading Berlin photographer to have her portrait taken. A few months later this picture appeared on the cover of the Nazi publication, "Sonne ins Haus" [Sun in the House]. Frightened by the possible consequences of their exposure as foreign-born Jews, Hessy's mother rushed to the photographer. He explained that he had known she was a Jewish child and had deliberately submitted her photograph to a contest for the most beautiful Aryan baby in order to ridicule Nazi racial theory, and Hessy was selected as winner of the contest among all the German babies. Several months later an aunt in Memel recognized Hessy's portrait on a picture postcard in a local store and sent it to the Levinsons in Berlin. The card was captioned "Best wishes for the birthday." After the publication of her photograph Hessy was kept largely at home lest she be recognized in the street and her parents questioned about her identity. In 1936 her sister Naomi was born. That same year her father was arrested by the Gestapo on a trumped-up tax charge. He was released only after his accountant, a Nazi party member, came to his defense. Following this incident the Levinsons left for Latvia, where they remained for a year until deciding to move to Paris in 1938. The family had fully reestablished itself when the Germans entered Paris. Jacob applied for American visas but had no way of knowing when they might come through. In 1941, when the round-up of foreign Jews began in Paris, the Levinsons fled to Memac-sur-Mer, a coastal town near Bordeaux. From there they were led by members of the French resistance to Nice. In the meantime Jacob received notice that their American visas had arrived, but that only 45 days remained to get to the U.S. before the visas would expire. Unable to find immediate transport to the United States, Jacob applied for an extension of their U.S. visas. The U.S. Department of Immigration denied these extensions. Jacob then secured Cuban visas for the family and booked passage on the Serpa Pinto, a Portuguese ship that left from Lisbon in early in 1942 for Havana. The family spent the next seven years in the Cuban capital, where Hessy and her sister grew up. In 1948 the Levinsons reapplied for immigration to the U.S. and arrived in New York in 1949.