A group of emaciated survivors in the infirmary barracks for Jewish prisoners in the Ebensee concentration camp. 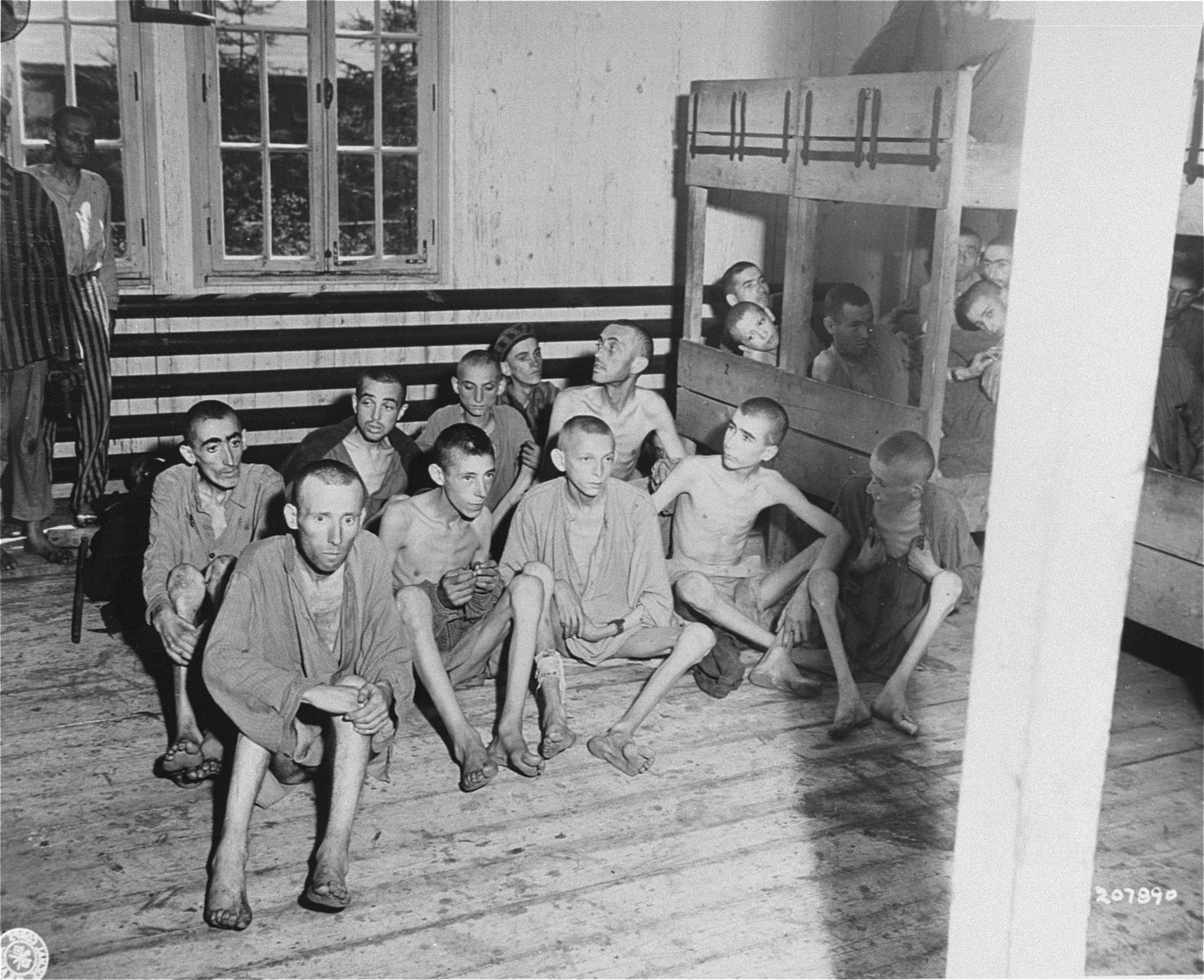 A group of emaciated survivors in the infirmary barracks for Jewish prisoners in the Ebensee concentration camp.

Among those pictured is George Havas (front row, second from the right).

J Malan Heslop (b. 1923), U.S. Army Signal Corps photographer, who took pictures of the advance of American troops through France, Belgium, Germany and Austria, including the liberation of the Ebensee concentration camp. Born in Taylor, Utah, Heslop was the son of Jesse and Zella Malan Heslop. He was raised as a Mormon in The Church of Jesus Christ of Latter-day Saints on a farm in West Weber, Utah, where his parents moved when he was still an infant. Heslop became interested in photography as a young boy. His father, who had taught himself photography after purchasing his first camera in 1912, showed him how to develop film when he was still in middle school. Subsequently, Heslop learned the art of photography on his own. While in high school he worked part time as a free lance family photographer and as an assistant photographer at the Ogden Standard Examiner, a local newspaper. Upon graduating from high school in 1941, Heslop bought himself a press camera. The following autumn he moved to Los Angeles to study photography at the Los Angeles City College. There, he learned that a new photography company was being organized within the U.S. Army Signal Corps with the assistance of professional photographers from the Hollywood movie industry. Heslop was advised to enlist in the National Guard, from which he would be assigned to one of the new companies. He did so in October 1942 and was assigned to the 167th Signal Corps company. While he was waiting to be called to active duty, Heslop was sent for several sessions of photographic training at Paramount Studios in Hollywood. In 1943 he was sent to Signal Corps training at Camp Crowder, MO, where he received little in the way of photography instruction. In July 1944 Heslop's company was shipped out to England, and two months later, on September 5, was on its way to Normandy with the 12th Army Group. For much of the fall and winter of 1944-45 Heslop operated out of company headquarters in Verdun. He was sent on assignments all over France, and occasionally into western Germany and Luxembourg. When the Germans launched their mid-December counteroffensive in the Ardennes Forest, Heslop was immediately dispatched to photograph what came to be called the Battle of the Bulge. In March 1945 Heslop was assigned to the 123rd combat unit. This unit consisted of two motion picture photographers: John O'Brian and Edward Urban, two still photographers: Walter McDonald and J Heslop, and the commanding officer, Lt. Arnold Samuelson. The unit was attached to the 9th Armored Division and crossed with it into Germany on March 20. Heslop and McDonald were issued both Speed Graphic and Leica cameras. The Speed Graphic, which used 4x5 inch sheet film, was employed for all official combat photography, while the 35mm Leica was used for less official purposes, including photographing fellow soldiers at their bases between assignments. While taking pictures, the still photographers were required to fill out photo identification cards with information about the place, date, event, and the names of individuals photographed (including their hometowns). These cards were dispatched with the sheet film by courier to England (via France), where the film was processed and the identifications stenciled onto the versos of the prints. Often copies of the developed prints were sent back to the photographers in the field, but not always. The Leica film was sent for processing to the lab at company headquarters, and the prints were returned to the photographers, who generally mailed them home for safekeeping. Heslop and the 123rd Combat Unit followed the 9th Armored Division across Germany through Naumberg, Leipzig, and Nuremberg. On April 28 the unit was transferred to the 80th Infantry Division, and the next day crossed into Austria. The 123rd Combat Unit was near Linz on May 7, V-E Day. The following day it entered the newly liberated Ebensee concentration camp, where Heslop took photographs of the starving survivors, many too weak to leave their barracks. As Heslop later wrote: "Men took the posture of thankful prayer as I entered some of the crowded barracks. I took many pictures. I did not have the capacity to fathom how terrible the situation was. The pictures tell the story. But the smell, sounds, and the gratitude must be experienced first hand." Heslop returned to the U.S. in late June 1945 and was discharged from the army on September 6. He then rejoined his wife, Fae Stokes Heslop, whom he had married during a furlough on May 1, 1944. After graduating from Utah State Agricultural School in 1948 Heslop went to work as a news photographer for the Deseret News in Salt Lake City. He remained there for the next 40 years, retiring as managing editor of the newspaper in 1988. Throughout this period he pursued a second career as an agricultural photographer for a leading advertising agency.