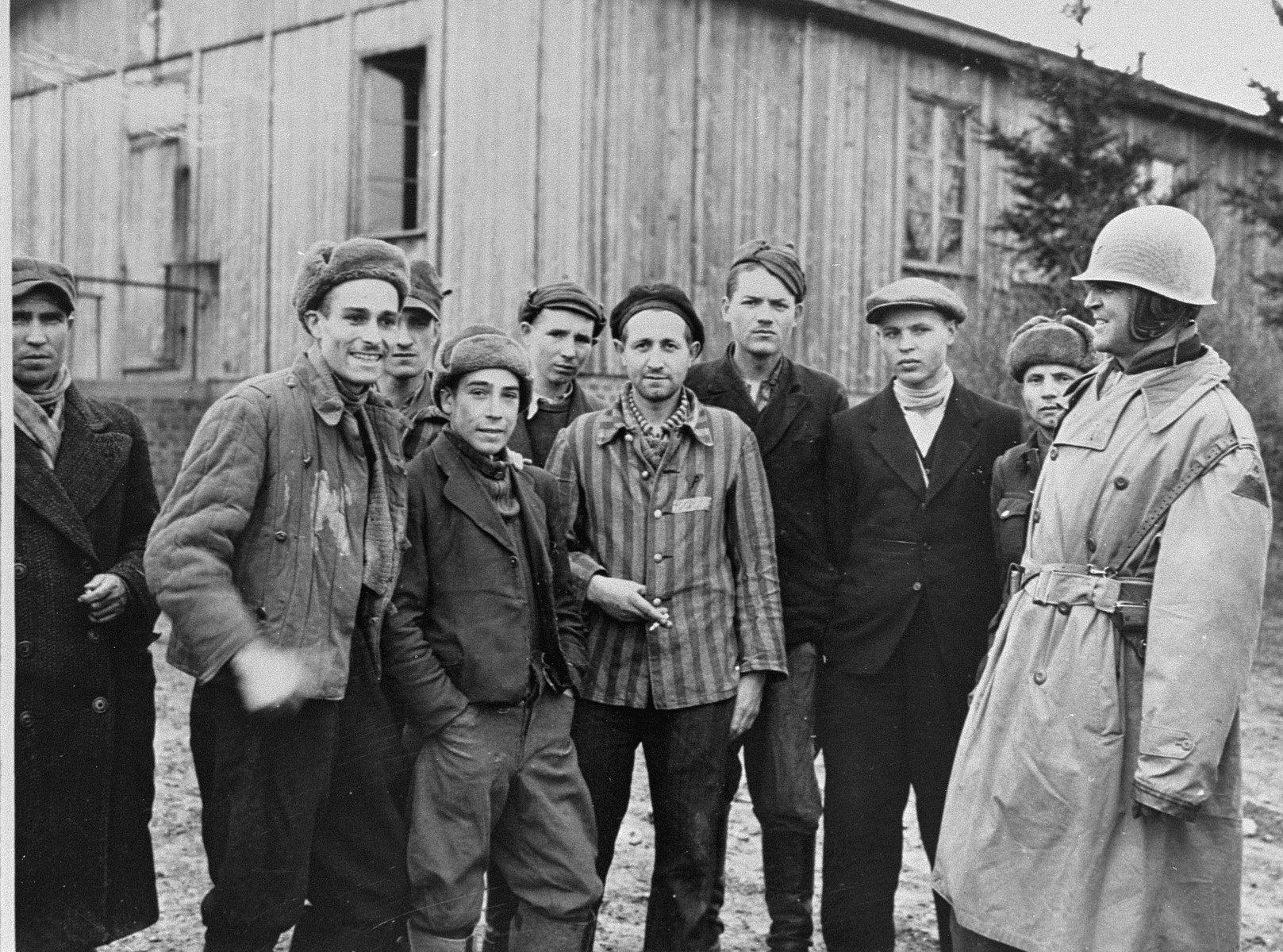 The original Signal Corps caption reads, "SS MURDER CAMP UNCOVERED. The swift advance of the Third U.S. Army's famous Fourth Armored Division uncovered the horror of a Nazi SS murder camp at Ohrdruf, entered April 4, 1945, after the fall of Gotha, eight miles to the north. American soldiers who seized the camp found the courtyard littered with the bodies of Czechoslovakian, Russian, Belgian and French slave laboreres, slain because they were too weak to be evacuated. In a shed, they found a stack of 44 naked and lime-covered bodies.

According to survivors, 3,000 to 4,000 prisoners had been killed by SS troops, 70 being slain just before the Americans reached the camp. The 80 survivors had escaped death or removal by hiding in the woods. They reported that an average of 150 died daily, mainly from shooting or clubbing. The Nazi system was to feed prisoners a crust of bread a day, work them on tunneling until they were too weak to continue, then exterminate them and replace them with another 150 prisoners daily.

Led by Colonel Hayden Sears of the Fourth Armored Division, prominent German citizens of the town of Ohrdruf saw with their own eyes the horrors of SS brutality during a conducted tour of the Ohrdruf charnelhouse April 8, 1945. As they stood over the slain prisoners, Colonel Sears said: "This is why Americans cannot be your friends..." The enforced tour of the Germans ended with a visit to a wood where 10 bodies lay on a grill, made of railways lines, ready for cremation. Colonel Sears asked a uniformed German medical officer: "Does this meet with your conception of the German master race?" The officer faltered and at last answered: I cannot believe that Germans did this.

THIS PHOTO SHOWS: Colonel Hayden Sears (right) is shown with some of the prisoners who escaped after they were forced to march away from the camp. Most of the illness in the camp was from typhus, civil affairs officers of the Fourth Armored Division discovered. The camp's survivors revealed that there was another SS camp nearby, still in enemy hands when this picture was taken, where thousands have died under the same conditions. British Combino-Acme Photo F15484 from Sport and General
WAR POOL PHOTO, NOT FOR USE IN BRITISH ISLES, FRANCE OR WESTERN HEMISPHERE
SERVICED BY LONDON OWI TO LIST B
CERTIFIED AS PASSED BY SHAEF CENSOR "