Jewish women from Subcarpathian Rus who have been selected for forced labor at Auschwitz-Birkenau, march toward their barracks after disinfection and headshaving. 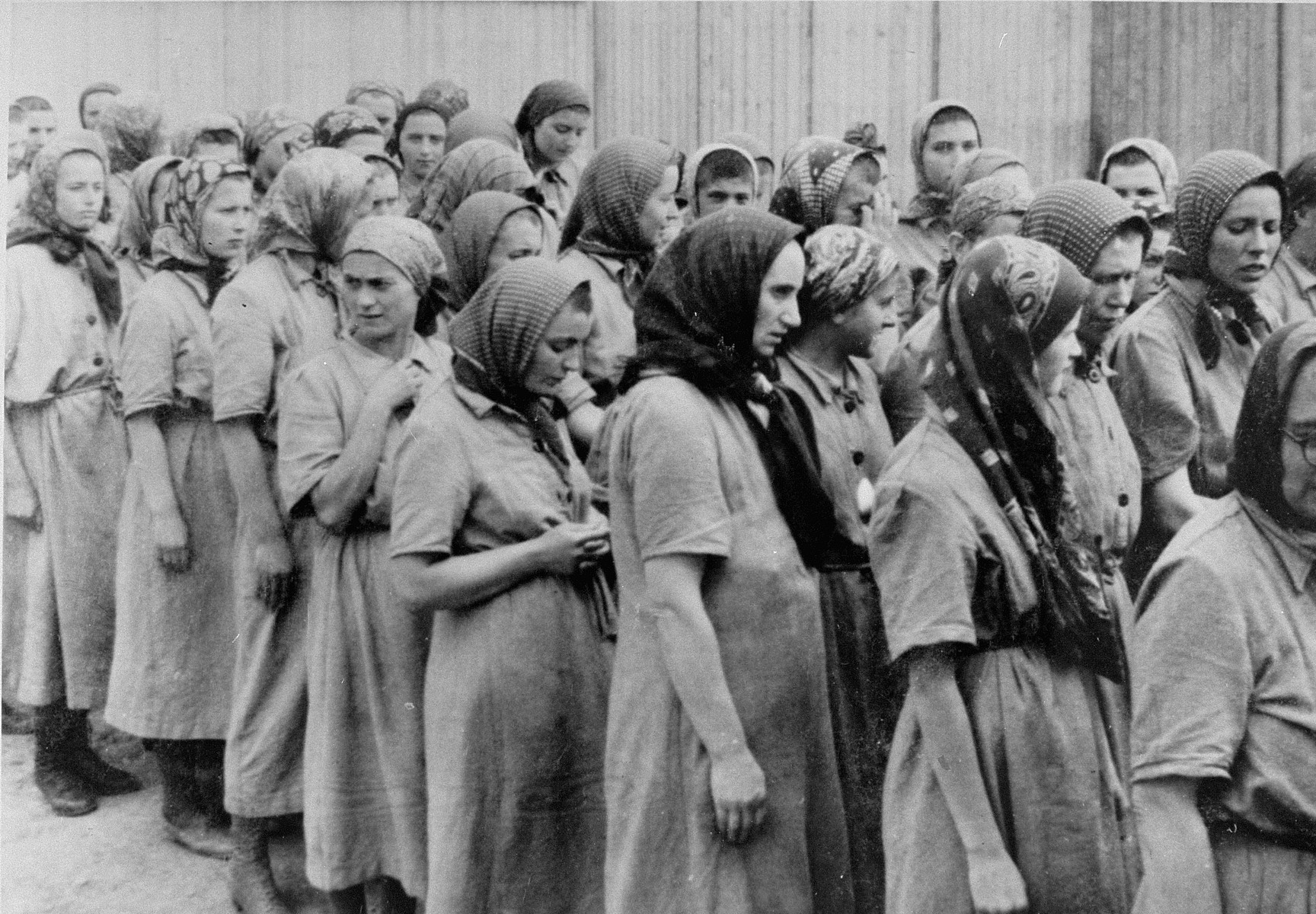 Jewish women from Subcarpathian Rus who have been selected for forced labor at Auschwitz-Birkenau, march toward their barracks after disinfection and headshaving.

Bubi Birnbaum was a singer who together with Suri and Piri Birnbaum occasssionally performed for the Germans in the camp.

[Sources: www.yadvashem.org/exhibitions/album_auschwitz (2000); Swiebocka, Teresa, Auschwitz A History in Photographs. The Auschwitz-Birkenau State Museum, 1993]
Biography
Magdalena Grunfeld Delman is the daughter of Leopold and Caroline Grunfeld. She was born on January 24, 1921 in Oradea, Romania where her father owned a chocolate factory. Magdalena had one older brother, Tibor Grunfeld, who was born in 1914 and worked as a physician. On June 29, 1941 Magdalena married Andrew Delman in Oradea. His parents, Isidore and pearl Delman, had both passed away of natural causes before the war. Isidore had owned a fabric store which Andrew took over after his death. Andrew was conscripted into a Hungarian labor brigade that was sent to the Russian front. He eventually escaped and made his way slowly back to Hungary hiding with strangers. Following their marriage, Magdalena relocated to Satu-Mare where she stayed for the next three years. She was in a ghetto for a few months in 1944 and then deported to Auschwitz. Magdalena's parents, and pregnant sister-in-law perished immediately. Tibor was spared and put to work as a camp doctor. However, knowing the fate of his parents and pregnant wife, he traded his meager food for rcigarettes and died of starvation. Magdalena was liberated from Auschwitz in 1945. After a short stay in a DP camp she returned to Satu Mare where she found her husband. In 1950 they left for Israel, and eight months later they immigrated to Canada.
Hanna Kelemen was born in Potwoloczyska, Poland on April 21, 1913, and grew up in Leipzig, Germany. In 1935, she married Joseph Kelemen, MD, who was from Transylvania. He had graduated from the University of Leipzig medical school in 1933 before Hitler became Chancellor. Hanna was forced to leave medical school in her second year. After they married, they moved to Bucharest and in 1940, returned to Marosvarsahey, Hungary where they thought they would be safe as the family had documents affirming that they lived there for many generations. They were deported in 1944 along with their son Gyuri Kelemen (b. 9/23/1942), Joseph's parent, and most of his family. After Auschwitz, Joseph was transferred to Kaufering KZ. Hanna was first transfered to Plaszow KZ, then back to Birkenau when Plaszow was emptied and then to Markleeberg KZ. They were reunited in August, 1945 and came to the US on the Marine Flasher in 1946.