Jewish deportees from the Hanau, Gelnhausen, and Schluechtern districts board the deportation train at the Hanau station. 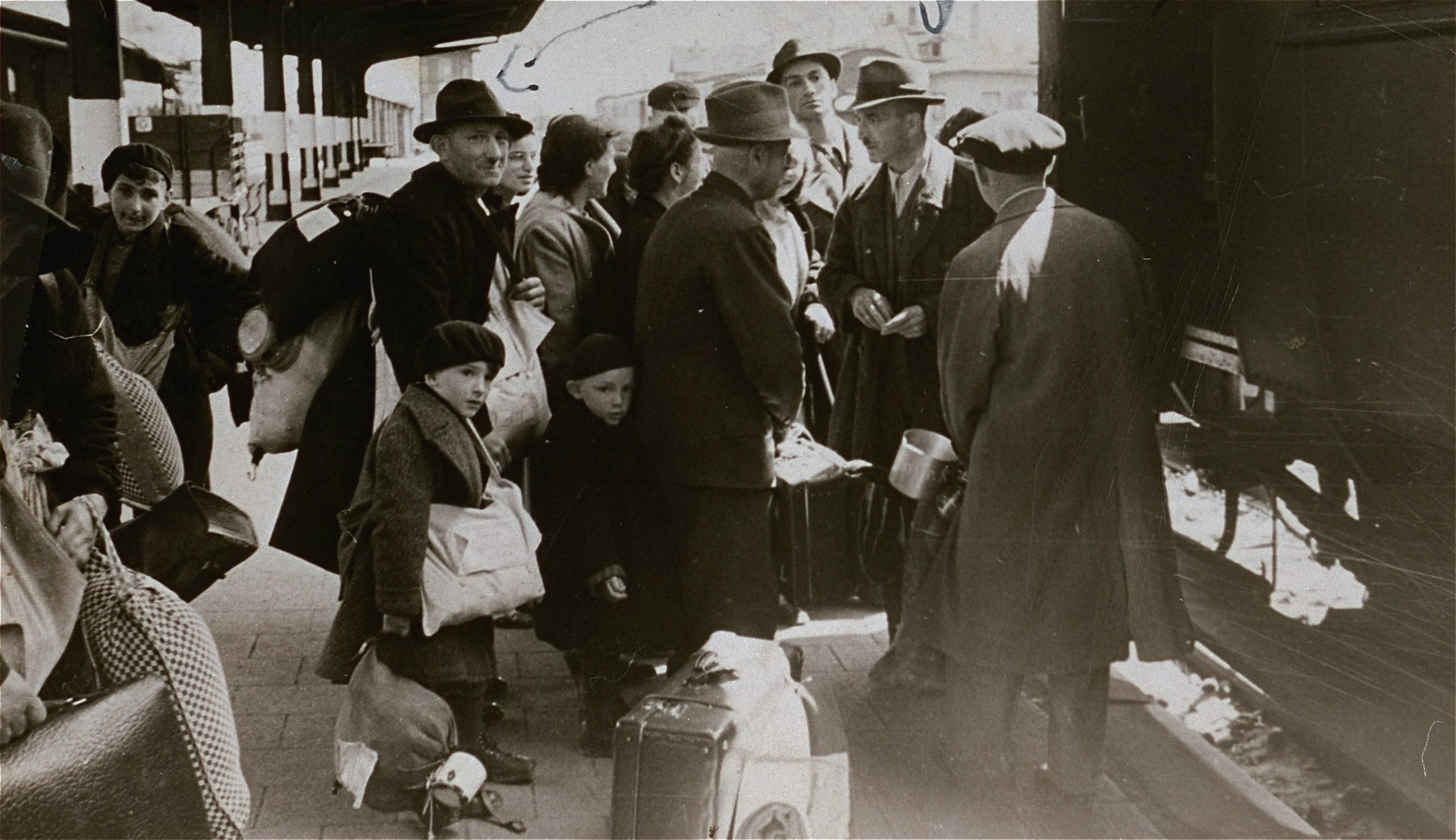 Jewish deportees from the Hanau, Gelnhausen, and Schluechtern districts board the deportation train at the Hanau station.

Among those pictured is Kurt Levi (age 13, at the far left) from Ostheim, and Ludwig Gernsheimer from Rueckingen (in the middle) with his two sons, Hans (age 6) and Lothar (age 4). Gernsheimer was the chairman of the Jewish community of Rueckingen and was the donor's uncle. He and his children perished.

Event History
The Jewish population of the districts of Hanau, Gelnhausen and Schluechtern was deported in three actions that took place on May 30, 1942, September 5, 1942 and February 15 or 16, 1945. In the first deportation action 115 Jews (mostly families) from the three districts were brought together at the Hanau railway station. From Hanau, the transport was taken by passenger train to Kassel. There, they were met by Gestapo and Schutzpolizei, and were taken to a nearby school, where the remainder of their possessions was confiscated. In order to secure the requisite 1000 people required by the RSHA office for a deportation transport, the Hanau group was joined to two other groups of deportees from Kassel and Chemnitz. The joint transport left Kassel on June 1 for Lublin. When the train arrived the next day, it was directed to a nearby track of the Majdanek station. The doors were then opened, and men between the ages of 15 and 55 were ordered to get out with their luggage. This group was taken to Majdanek on June 3. The remainder of the transport was taken to Sobibor, where they were gassed immediately on June 3-4. The second deportation action that took place in September involved 95 Jews from the three districts, and included the older people and World War I veterans who had been exempt the first time. This group was also sent by train to Kassel and taken to the collection center at the Schillerstrasse school, where their remaining valuables were confiscated. The following day, September 7, the Hanau group, together with a much larger group of deportees from Chemnitz, was sent in a joint transport of approximately 1000 Jews to Theresienstadt. 26 Jews from the Hanau transport were transferred three weeks later to Treblinka. Others from this transport were later sent to Auschwitz. From this group only three elderly women survived until liberation. The last deportation from the Hanau and Schluechtern districts took place in February 1945 and included 21 Jews who were married to non-Jews. These deportees were taken by train to Frankfurt am Main, where they joined a group of approximately 300 similarly situated Jews who had been assembled at the Grossmarkthalle. This transport traveled in freight cars from the Frankfurt Ostbahnhof to Theresienstadt, arriving on February 18. All of them survived until the liberation.
[Source: Pfeifer, Monika Ilona and Kingreen, Monica. "Hanauer Juden 1933-1945: Entrechtung, Verfolgung, Deportation." CoCon-Verlag, Hanau, 1998, pp.98-137.]