The evacuation of survivors from the Woebbelin concentration camp to an American field hospital. 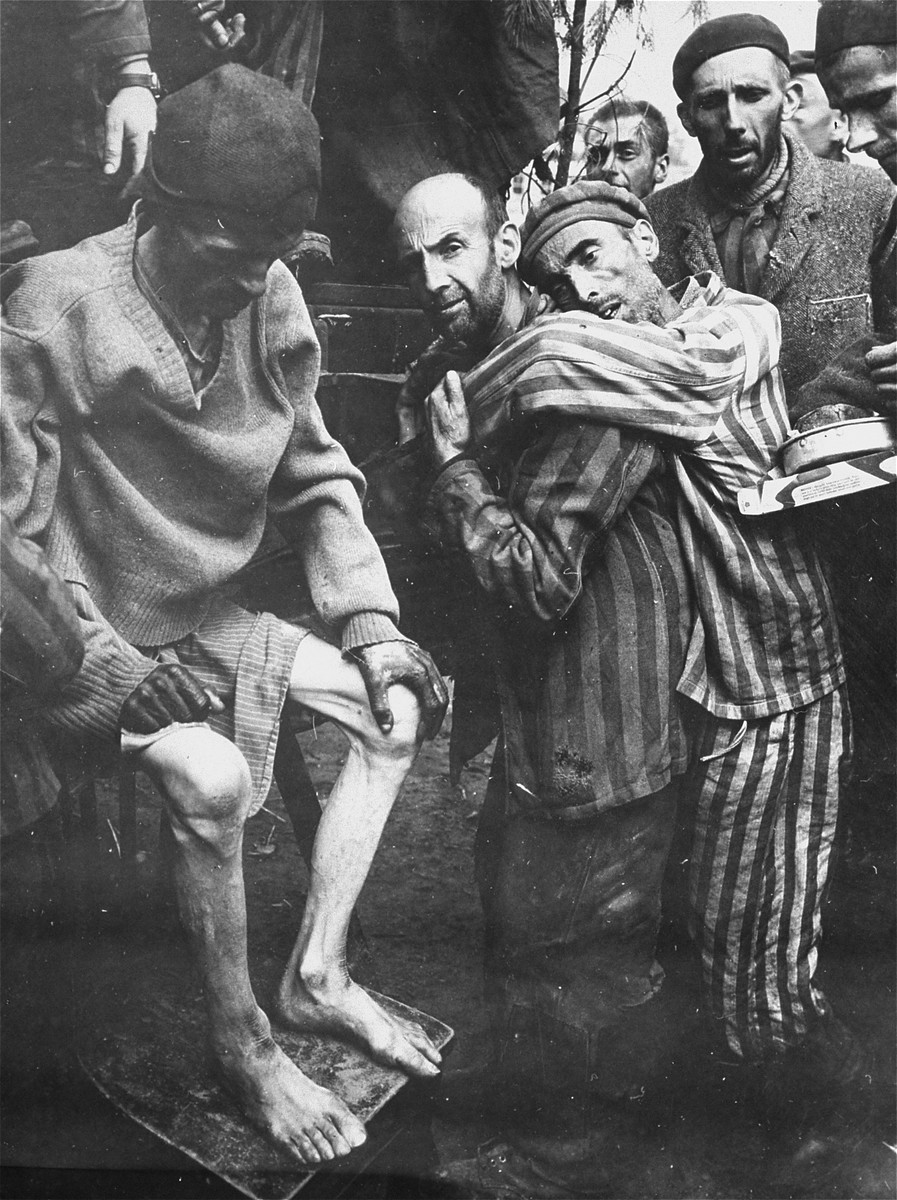 The evacuation of survivors from the Woebbelin concentration camp to an American field hospital.

Among those pictured, center, carrying a fellow survivor is Aliende, a political prisoner.

The original caption reads "This is one of a series of pictures taken at German Concentration Camp in Woebling, Germany after its capture by troops of the 82nd Airborn Division, 9th Army. These former prisoners of the Germans are being taken to a hospital for much needed medical attention after being nearly starved to death."
-----------------
The original Signal Corps caption reads, "NEW NAZI HORROR CAMP DISCOVERED. One of the worst Nazi concentration camps uncovered by Allied troops was liberated at Wobbelin, Germany, a small town five miles north of Ludwigslust and 90 miles northwest of Berlin. Soldiers of three Allied units -- the 82nd U.S. Airborne Division, the Eighth Infantry Division of the Ninth U.S. Army and airborne troops of the Second British Army -- entered the camp and found sick, starving inmates barely surviving under indescribable conditions of filth and squalor. They found hundreds of dead prisoners in one of the buildings while outside, in a yard, hundreds more were found hastily buried in huge pits. One mass grave contained 300 emaciated, disfigured corpses. The dead included Poles, Russians, Frenchmen, Belgians, Dutchmen and Germans, all of whom had been working as slave laborers for the Nazis.

It is estimated that at least 150 of the original 4,000 prisoners succumbed daily, mostly from starvation and savage treatment at the hands of Nazi SS troops who operated the camp. Some of the bodies found were burned almost beyond recognition and systematic torture of the inmates was revealed by the physical condition of most of the survivors. Military Government officers immediately ordered leading citizens of nearby Ludwigslust and other towns to march through the camp and witness the atrocities committed by representatives of the German Government. Most of the civilians disclaimed any knowledge of the camp's existence despite the fact that many of the prisoners worked in the area.

The local residents later were made to exhume the bodies from the mass graves at the camp and provide decent, respectable interment of all dead prisoners. Two hundred were buried in the public square of Ludwigslust May 7, 1945, and an equal number were buried in the garden of the highest Nazi official of Hagenow. Eighty more were laid to rest in the town of Schwerin.

THIS PHOTO SHOWS: Sick and half-starved prisoners are removed from tHE Wobbelin camp for treatment at a hospital. U.S. Signal Corps Photo ETO-HQ-45383
SERVICED BY LONDON OWI TO LIST B
CERTIFIED AS PASSED BY SCHAEF CENSOR


Original caption from donated photograph reads, "Sick and half-starved prisoners at the concentration camp at Wobbelin, Germany, are removed for hospitalization after seizure of the area by U.S. troops. Wobbelin was considered one of the worst of the many German concentration camps liberated by the Allies. Hundreds of dead bodies lay near dying inmates and hundreds more were found hastily buried in huge pits. One mass grave contained 300 emaciated, disfigured corpses, bodies of former slave laborers who succumbed to brutal treatment and starvation. It is estimated that at least 150 of the original 4,000 prisoners died daily."