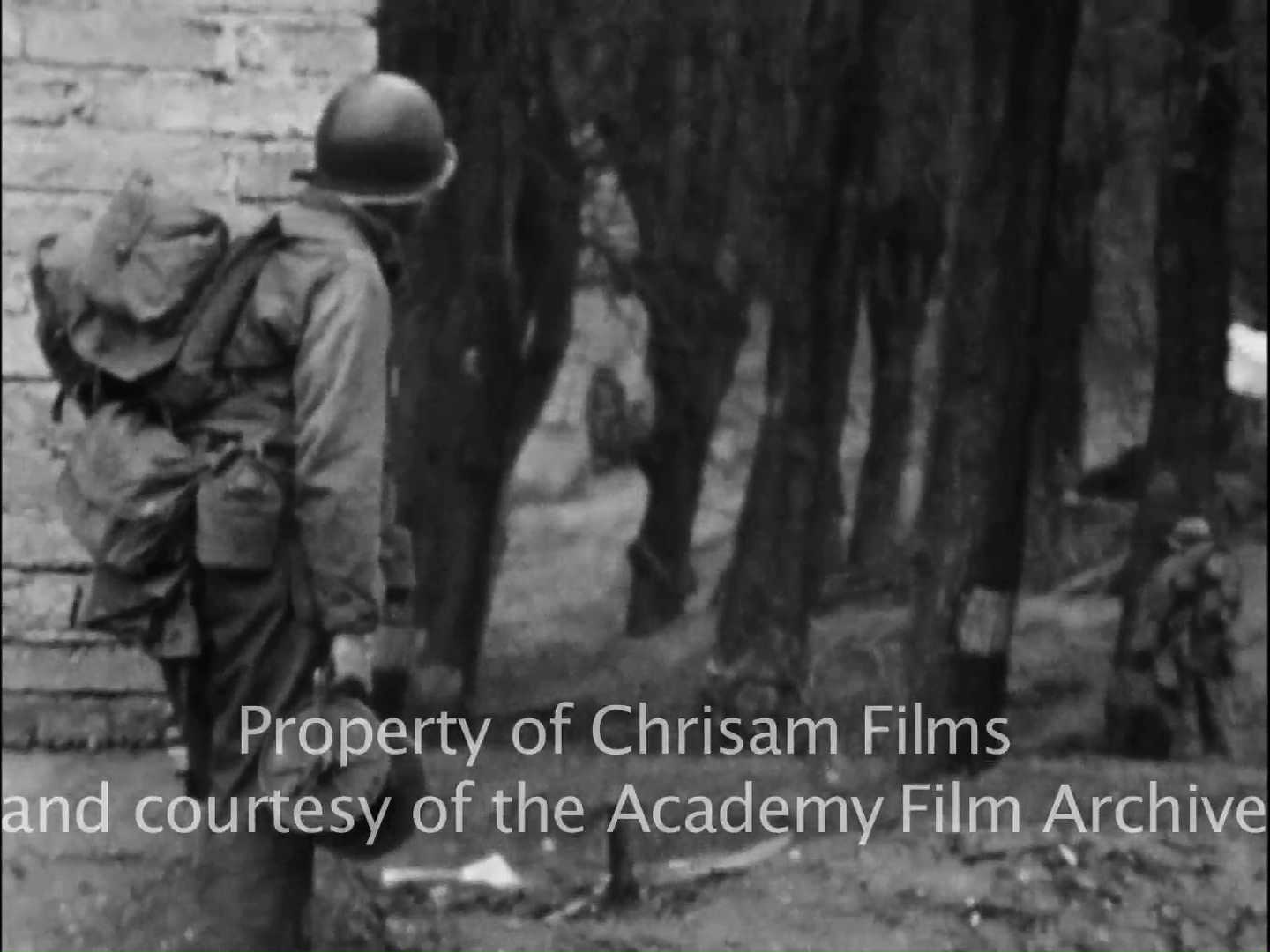 Card: "V-E +1, MAY 9, 1945." Card: "Produced in Falkenau Concentration Camp." Card over Nazi swastika and eagle: "in choslovaki [sic, probably meaning Czechoslovakia]" Shot of a handgun, Card: "OST Russia." Card: "Presented by 16th Infantry Regiment." Card: "1st U.S. Infantry Division." Card: "Supervised by Capt. Kimball Richmond." Card: "Photographed by Cpl. Samuel Fuller." Men carrying tools walk down a village street. Soldiers stand in front of barbed wire. Well-dressed, healthy men walk and carry shovels and pitchforks, soldiers watch from the side of the road. Two men stand behind barbed wire, one man walks with cane. Men huddled in group. Emaciated man walks in BG. Survivor pulls up pants. Allied soldiers. Procession of men walking with shovels. Sign on American army truck reads: "Good - Show!" The men stop at the side of the road, stand and put their hands behind their backs. Pile of corpses in a corner inside a room, CU feet, pan up to show blankets covering the bodies. Men sit on top of a hill and look down. Soldiers talk to the men and distribute clothing. Men struggle to put the clothing on a emaciated, naked man lying on a stretcher. Others carry a naked corpse from a hut and dress him. Men observe from the top of the hill, CUs of their faces. A corpse is wrapped in a black blanket, one man clasps his hands in front of him. More bodies are handled and dressed. Soldiers watch, two appear to be covering their faces, barbed wire fence in BG. 4:16 Men continue to dress the bodies. CU of a distraught face. A Red Cross officer instructs the soldiers. Men carry a stretcher, CU, legs. Three corpses on a blanket outside, men dress another. Men look at the blanket and row of corpses while others sit on the hill and watch. Pan of the row of corpses. Men walk around. Wagon. Pan of the feet of the corpses in the row. Men inspect clothing left on the wagon. US Army trucks. More sheets added to the ground and more survivors brought in. Soldiers watch. Pan of Falkenau showing an injured man on crutches. Soldier in glasses glances toward the camera. More bodies carried and added to the group. Pan of the barbed wire fence, fields, and houses behind it and crowd watching the dressing process. Growing row of corpses. Soldiers stand huddled in groups talking. Men walk around the wagon, men carry stretchers with corpses, men stand at attention. Pan of the corpses' heads. Soldiers salute, including wounded soldiers with head bandages. View of the crowd on the hill. 12:29 The survivors are moved from the ground to a wagon, CUs faces. Men watch. Man carries mug up the hill. CUs, feet. The last corpse is loaded, covered with a sheet, and taken away. The "Good - Show!" truck drives away. Wagons pass under a gateway with a star. Head-on view of men proceeding through the streets alongside the carts/wagons. Villagers watch the procession from the sidewalk. Wagon filled with furniture. Men sit on an Army tank. Boy carrying a rifle plays in the street and runs after a tank. Men push the wagons toward a building with a Red Cross flag. Men carry shovels and pitchforks. Women and children walk around and watch. Soldiers take their helmets off. Men push the wagons past trees and uphill, the town can be seen in BG.

EXT, large building, broken windows. Two young women smile at the camera, sign behind them: "Off Limets" [sic]. Cows pull a wagon through village street. Men on bikes. Post with a swastika on top. Pedestrians walking, smiling at camera. Ruins of a building. Two women inspect the debris. Airplane in the sky. People walking past bombed out buildings. Rubble. Rooms of a house exposed due to bombing damage. Boy stands outside. 30:35 American soldier looks at bombed homes. Sign: "Danger, Base, Athletic Field" with an arrow. Soldier walks in the direction of the arrow past a dilapidated shed. Soldiers play volleyball. Soldiers in uniform lounge on the grass and talk to each other, look at the camera, and smile. A soldier in uniform pulls a log out of rubble. Men in civilian clothing clear debris and dig out. 33:32 Band performs (guitar, saxophone, trumpet, violin). Woman in white dress with a black sequin halter bodice dances and twirls as the men play music. Another woman dances. Man on unicycle juggles several hoops, pins, hats, and hoops again. Men and women smiling into the camera, pan to swastika and eagle on the wall behind them. 36:10 Sign: "Danger Base" with arrow. Soldier walks near street sign. Men shovel rubble as smoke rises from the ground. American soldier stands at the edge of a bridge looking down at the water. Makeshift Red Cross hospital with nurse on doorstep. Women with dog and young girl. Sign: "Besuch verboten" [Visiting forbidden]. Boy stands with a baby carriage. Soldiers, a nurse, and civilian women talking in front of the hospital doors. People enter the hospital. 37:17 Men in uniforms in front of a fence, CUs. Men put shaving cream on their faces, yawn, shave. Soldiers talk, eat, smoke. EXT building with German inscriptions in gold on the façade. Men inspect rubble. Village man carries a load. Trees. Rubble. The skeleton of a building, destroyed homes, soldier on one knee with his gun in the midst of rubble. Sign: "Eingang streng verboten" [Entrance strictly forbidden]. Sign: "Zutritt zu dem Bahnhof ist Unbefugten streng verboten" [Unauthorized entrance to the train station is strictly forbidden]. Man herds cattle. Sign over a building's front door with Red Cross sign, "Off limits to military. Kein eingang" [No entrance]. Door opens. Doctor walks down street. Man holding briefcase under his arm smiles. Sign carved on door: "Landwirtshaeftliche Hochschule" [Agricultural University]. Sign: "Kuratorium der Universitaet." Bombed-out dome. Another sign: "Chemisches Institut der Universitaet." Men hose and sweep a street. 40:45 COLOR. Long rolled up banner with swastika insignia pattern. American soldier with swastika-and-eagle flag wrapped around his waist points a gun at the camera, turns away, points to the sky. A giant swastika is on his backside. He turns back around toward the camera and inspects the gun. The man walks on swastika patterned fabric. Soldier in the makeshift-flag-skirt salutes the camera. Two soldiers unroll swastika pattern fabric. Soldier smoking. Soldiers examine fabric, a gun, bayonets. 44:37 B/W Two women smile at the camera and kiss. American soldier in a doorway, smiling, pan. Another soldier in a helmet appears, takes his helmet off, smiles broadly toward the camera, walks away. AGFA logo. 45:41 COLOR. American soldier standing on the street looks into the camera, smiles, smokes. CU, 1st Infantry Division uniform insignia and service ribbons. Countryside and factory. Soldiers walk through the street in Verviers, Belgium. A child roller-skates. Coca Cola ad. American soldier salutes the camera and talks to the camera. Memorial monument. Woman in vibrant red dress walks under laundry lines and talks to the camera. She poses, walks on the cobblestone, talks. Riverside, laundry lines, cafes and shops. People walk and pass on bikes. Homes, shops, a church in Verviers. Two blonde, rosy-cheeked children smile at the camera. The girl playfully tugs on the boy's neck, smiles, and kisses the boy's cheek. Girl holds a doll. Views of the bridge, people walk and cars drive over it. Sign: "Bieres Artois." Buildings along the river. Sign: "Pro Station," Red Cross on top. Sign: "Occasion, Vente, Achat, Echange." A table with assorted items. 49:25 B/W American soldier wearing a helmet smokes a cigarette. He takes his gun off his shoulder and out of its holster. He prepares it and, with his cigarette still in his mouth, aims it. Multiple shots. The man reverses his actions and laughs at the camera. Soldiers walking and smoking. Path surrounded by bushes and rubble. Shovel. Man pulls up his trousers. Large group of soldiers dump pans into giant trash cans. They inspect an abandoned car. Soldier walks around the ruins of a house seen earlier. CU, book: "Solomon, My Son! by John Erskine." Soldier reads it and yawns.