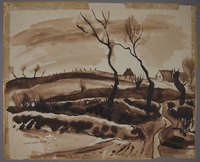 Legal Status
Permanent Collection
Provenance
The watercolor painting was donated to the United States Holocaust Memorial Museum in 1999 by George Wachtel, the son of Roman Wachtel.