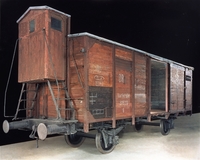 Association type 2 (A2), Gedeckter (G, covered) freight wagon owned by the Deutsche Reichsbahn (DR, German National Railway), one of several types used to transport victims through the Nazi camp system and to killing centers during the Holocaust. The car, numbered 31599, is a 15T (rated to carry 15 tons), equipped with a brakeman’s box, making it a Karlsruhe class wagon. The cars continued to be used after World War II, and as parts on the cars degraded, they were replaced with others from a variety of manufacturers. A2 railcars were produced from 1910-1927, and were originally used to transport goods that required protection from the elements. Deportation trains were ordered by telegram or telex, and gave the amount and type of cars needed. The actual trains were compiled at the stations from the cars available there. Before each transport left, the railway guard listed all cars by their identification numbers. Few of these lists survived, as they were not kept after a train had reached its destination. Jewish prisoners were then packed into railcars, approximately eighty people per car, and transported into the Nazi camp system, and eventually to killing centers in German-occupied Poland. During transport, prisoners were denied food and water, and many deportees died before the trains reached their destinations. Armed guards shot anyone trying to escape. The Reichsbahn charged a base rate of third class passenger fare for a deportee, children under ten traveled at half price and those under four traveled free, and special group rates were offered if at least four hundred people were in one shipment. Payment for transport was handled by the Reich Security Main Office headed by Adolf Eichmann.

Physical Description
Large, rectangular, red and black painted Association type A2 railroad freight car with sliding doors, vault roof, and a large wooden brakeman’s cabin on the back end. The car consists of a wooden box attached on top of a metal frame with four metal wheels that sit on two long railroad tracks (1989.225.2a, b). The main, black steel frame is comprised of four diagonal beams, four girders, and five cross members bolted and riveted together. The frame sits on two trucks (bogies); front and rear assemblies that contain the wheels and axles. The metal wheels are stamped with small circular maker’s marks. The wheels are connected to the axle by a lubricated bearing inside a cube-shaped housing called a journal box, which has a circular end cap with embossed text around the perimeter. The journal box is attached to the outer girder by two triangular-shaped side frames and a top leaf spring comprised of metal strips clamped together. The ends of the leaf spring are attached to the bottom of the girder and support the weight of the car. On the front and back, extending from the center of the frame is a chain coupler; a large metal hook with a rectangular-shaped link, a turnbuckle, and a U-shaped link extending from it. Flanking the coupler are two buffers; cylindrical metal shock absorbers with a circular metal plate at the end.

Biography
The Deutsche Reichsbahn, (DR, German National Railway) was formed from the nationalization and merger of the remaining independent German railway systems with the Deutscher Staatsbahnwagenverband (DSV, German State Railway Wagon Association) in 1920. Before nationalization, the German railways developed independently in each state, and utilized different standards that quickly became a problem as the systems became interconnected. To combat this, in 1909, the majority of the independent lines formed the DSV to standardize designs and allow easier access between rail lines. On April 1, 1920, the final outlying rail lines were brought into the fold and the system was nationalized by the German government. In 1924, under the Dawes Plan, the DR was reorganized as a state-owned company outside of the government.

After Adolf Hitler was appointed Chancellor in 1933, the Reichsbahn was reformed as a tool to help implement the Nazi agenda. The Reichsbahn’s role was expanded to assist with job creation, infrastructural improvements, and military logistical needs. It became one of the largest organizations in Nazi Germany, with over 1.4 million personnel and hundreds of thousands of indigenous workers in occupied territories. When Germany was at war, the Reichsbahn transported troops and industrial cargo, soldiers on furlough, vacationers, foreign laborers, and Jews. Deportations of Jews began immediately after the conquest of Poland in 1939, and millions of Europe's Jewish citizens were transported through the camp system, and eventually to killing centers in German-occupied Poland.

To save locomotives and to reduce the total number of transports, the trains were lengthened and the cars loaded beyond capacity. Generally, the SS attempted to fill a deportation train with one thousand people. However, over time two thousand people became the standard. Coaches were reserved only for guards, while Jews were packed in freight cars with doors, approximately eighty per car. At times, there was less than two square feet per person. The overpacked trains reduced the locomotive’s speed, and circuitous routes were used to avoid congestion, which only lengthened the travel time. During transport, Jews were given buckets to use as toilets, which frequently overflowed. They were denied food and water, and many deportees died before the trains reached their destinations. Armed guards shot anyone trying to escape. The freight cars were not heated or cooled, and Jews had to endure suffocating heat in the summer or freezing temperatures in winter.

Payment to the Reichsbahn for transport was handled by the Reich Security Main Office headed by Adolf Eichmann. On February 20, 1941, Eichmann accepted responsibility for the transport costs in the incorporated Polish territories on behalf of the Main Office. Third class passenger fare was the base rate for a deportee; children under ten traveled at half fare, and those under four traveled free. Special group fares of half the third class rate were offered if at least four hundred people were being shipped. On the return trips from the east, the freight cars carried belongings of the dead from camps to Germany for redistribution.

Additionally, the Reichsbahn used the slave labor of prisoners of war (POWs), concentration camp prisoners, and foreign forced laborers to construct and repair railway lines, unload equipment, and dig trenches. The prisoners were forced to work at multiple camps and subcamps throughout Germany and its occupied territories including: Buchenwald, Dachau, Flossenbürg, Mauthausen, Neuengamme, Riga-Kaiserwald, and Stutthof.

The Mittelstahl Company located in Gröditz, Germany, was part of the Flick Concern, a group of industrial enterprises owned by Friedrich Flick. Flick was a leading financial supporter of the Nazi party and friend of Heinrich Himmler. The Flick industrial plants in Gröditz employed thousands of foreign slave laborers, prisoners of war (POWs), and concentration camp prisoners. The concentration camp prisoners were denied adequate rations, living conditions, medical care, and were forced through punishment to meet high work performance expectations. In March, 1945, a typhus outbreak claimed the lives of many prisoners. In April, the prisoners were sent on a forced marched out of Gröditz away from approaching Allied forces. On April 17, 184 prisoners who were deemed unfit to march were executed. In April 1947, Flick was found guilty of war crimes and crimes against humanity by an American military tribunal in Nuremberg, Germany. Although he was sentenced to seven years in prison, he was released after three.

Legal Status
Permanent Collection
Provenance
The freight car was donated to the United States Holocaust Memorial Museum in 1991 by the Chief Commission for Investigating Nazi Crimes in Poland, Institute of National Remembrance.

The collection consists of a rail car used to deport victims to concentration camps, railroad tracks and components that led to Treblinka killing center, and a chain.

Railroad rails and components from railroad tracks that led to Treblinka killing center in German-occupied Poland. The individual rail segments were connected end to end with fasteners called fishplates (joint bars), which were bolted to internal holes in the rails to secure the tracks together and keep them from moving as trains passed over them. During the Holocaust, the Nazis used the European rail network to transport their victims into the camp system, and eventually to killing centers in German-occupied Poland. Deportation trains were ordered by telegram or telex, and gave the amount and type of cars needed. The actual trains were compiled at the stations from the cars available there. Before each transport left, the railway guard listed all cars by their identification numbers. Few of these lists survived, as they were not kept after a train had reached its destination. Jewish prisoners were packed into railcars, approximately eighty people per car, and were denied food and water. Many deportees died before the trains reached their destinations. Armed guards shot anyone trying to escape. Incoming trains bound for Treblinka first stopped at the Malkinia station. Twenty cars at a time were detached from the train and brought into the killing center. There, the victims were told they had arrived at a transit camp, ordered to disembark, and instructed to hand over their valuables. Between 870,000 and 925,000 Jews were killed at Treblinka, most of them delivered by train.

Yellow painted, large metal chain with a large hook on one end

Large metal chain with a hook on the end acquired with a railroad freight car and railroad rails from Poland in 1989.