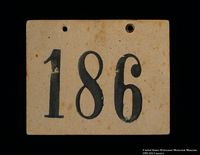 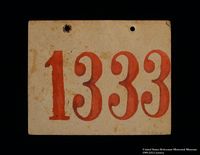 Identification tag issued to 14 year-old Henry (Heinrich) Schmelzer in December 1938, for his emigration from Vienna, Austria, to England aboard a kindertransport. He was among 150 children who were taken to an estate in Scotland, which was leased to the Whittingehame Farm School, a combination boarding school and Zionist training center for eventual immigration to Palestine. In 1940, after two years at Whittingehame, Henry was interned for three months as an enemy alien. After his release, Henry worked various jobs and moved around Britain multiple times. In August 1943, when enemy aliens were allowed to enlist in combat units, Henry volunteered. Using the pseudonym of Henry Scott, he trained with a mountain unit of the Royal Scots, but a health condition prevented him from deploying. Henry remained in Britain and became a staff sergeant interpreter, debriefing Nazis and German prisoners of war. In 1950, he reunited with his family, most of whom had immigrated to the United States. Henry emigrated from England to Israel in 1953 and married his wife, Francine, in 1959. The couple had one daughter before immigrating to the United States in 1969, where he joined the rest of his family and obtained a doctorate.

Biography
Henry Schmelzer (b. Heinrich, 1924) was born in Vienna, Austria to Zurech (later Sigmund, 1887-1956) and Jeneta (nee Mühlbauer, 1886-1980) Schmelzer. Henry was the youngest of four children; he had a sister, Lea (later Blumenstock, 1914-2005), and two brothers, Gabriel (1916-1984) and Leo (b.1918). Zurech owned a successful wholesale wine business that supplied hotels and restaurants, and as a result, the family had an upper middle-class lifestyle and a series of live-in maids. The Schmelzers were not Orthodox but practiced traditional Judaism, and Zurech was vice-president of a local Zionist philanthropic organization. As a child, Henry was a shy bookworm, encouraged by his parents who had a reverence for books and education. He attended the public elementary school around the corner from his home, and later attended a gymnasium (Jewish high school), where he graduated in 1938.

Henry was aware of Austria’s deep-seated antisemitism, which increased when Germany annexed Austria on March 13, 1938, in what became known as the "Anschluss." The Germans quickly introduced anti-Jewish legislation and confiscated Jewish-owned businesses and property, including Zurech’s business. After this, Zurech’s health went into a downward spiral, with daily epileptic episodes and heart trouble. The Nazis harassed the family, and invaded their home multiple times before they eventually locked and sealed them out. The family had to move in with Henry’s sister, Lea, who had recently married and had a child. Henry’s father fell into a depression, and often talked of wanting the family to commit suicide together, as some other Jewish families they knew had. Henry’s mother refused to let this happen.

In August 1938, Henry’s eldest brother, Gabriel, was able to immigrate to the United States, with an affidavit from American members of Jeneta’s family in Brooklyn, New York. His other brother, Leo, escaped into Italy and sailed illegally on a ship to Palestine, where he served in a Jewish battalion for Great Britain. After Henry had graduated from gymnasium, his parents registered him for a carpentry-training course under the auspices of the Organization of Jewry in Vienna. He was at his workshop on the day of Kristallnacht in November 1938. Henry’s supervisor dismissed him early, and while on the tram he witnessed the burning of one of the city’s synagogues. By the time he got home, Henry’s father and brother-in-law had already been arrested. Zurech was soon released, however, on the condition that he would emigrate from Austria.

On December 18, 1938, Zurech had managed to secure Henry a spot on a kindertransport to England, coordinated by the Jewish Community Organization in Vienna. Shortly after Henry left, Zurech also emigrated, under the German variation of his name, Sigmund, and arrived in New York City on January 20, 1939. Jeneta chose to stay with Henry’s sister, Lea, who had an infant. In England, Henry and the other children who did not have sponsors were housed at Dovercourt Refugee Camp. He was among 150 children who then went to the estate of Whittingehame in Scotland, which was leased to the Whittingehame Farm School. It was a combination of boarding school and hakhsharot; a Zionist training center for eventual immigration to Palestine. Henry lived at the school for two years, and grew close with the other refugees.

On May 13, 1939, Lea, her husband, and her daughter set sail from Hamburg, Germany, to Havana, Cuba on the MS St. Louis. When the refugees were denied entry into Cuba, and the United States, the ship had no choice but to return to Europe. Lea’s family was allowed to enter England on June 21, 1939. Henry’s mother, Jeneta, finally left Vienna, and arrived in New York on November 9, 1939.

In May 1940, the German army invaded Western Europe, and many German and Austrian refugees in England 16 years of age or older were reclassified as enemy aliens. Henry was among a group of teenagers who were taken to Scotland Yard in London under armed guard, and later interned at a camp at Lingfield racecourse in Surry, next to a German prisoner of war camp. That August, the refugees were released from internment, and Henry retuned to Whittingehame.

Early in 1941, Henry was sent to a dilapidated, unsanitary, camp, where he worked picking fruit for jams and other products. He then went to Cambridge hoping to attend university, but settled for work as a gardener while taking a correspondence course. Henry used his work hours to study, and was subsequently fired from his job. Afterwards, he reunited with his sister, Lea, whose family had settled in Spalding, a town north of Cambridge. There, he worked in nursery gardens and later in a sugar refinery as a laboratory assistant. Henry moved again to London, where he worked in a factory as a lathe operator for aircraft parts.

In August 1943, when enemy aliens were allowed to enlist in combat units, Henry volunteered and used the pseudonym of Henry Scott in order to hide his Jewish name. After 16 weeks of training, he joined a mountain unit of the Royal Scots, which had a very difficult training regime in the northern mountains of Scotland. The snowy and icy conditions combined with the heavy workload caused Henry to develop a severe arthritic condition. A few days before they were supposed to deploy, Henry was taken off the unit because of his medical status.

Henry remained in Britain for the duration of the war, which ended in May 1945. He became a staff sergeant interpreter, and debriefed Nazis and German prisoners of war. After he left the army in September 1947, Henry returned to London and entered polytechnic school. He then attended the London School of Economics, where he got a degree in political science and economics.

In 1950, Henry traveled to the United States via Canada and reunited with his parents, who had settled in Brooklyn, New York. He stayed with them for two months. Henry emigrated from England to Israel in 1953 and married his wife, Francine, in 1959. The couple had one daughter before immigrating to the United States in 1969, where he joined the rest of his family and obtained a doctorate.

Legal Status
Permanent Collection
Provenance
The tag was donated to the United States Holocaust Memorial Museum in 1989 by Henry Schmelzer.
Funding Note
The cataloging of this artifact has been supported by a grant from the Conference on Jewish Material Claims Against Germany.

The collection consists of an identification tag and documents relating to the experiences of Henry Schmelzer who was sent from Austria to Great Britain on a Kindertransport in 1938.

The papers are related to Henry Schmelzer's journey from Austria to England via Kindertransport in 1938 and his stay in England during World War II.