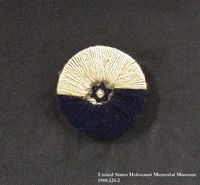 The pin was made by a friend and given to Ruth Wiener as a birthday gift at Bergen-Belsen concentration camp in Germany.

Physical Description
The pin is made of black and white thread wound around a cardboard disk. A Star of David is embroidered in black thread on a white background in the center of the pin. A safety pin is attached to the back of the cardboard base.
Dimensions
overall: Height: 2.125 inches (5.398 cm)
Materials
overall : wool, cardboard, metal
Contributor
Subject: Ruth Klemens

Biography
Ruth Klemens (1927-2011) was born in Berlin to Alfred Wiener (b. 1885) and Margarethe Wiener (nee Saulmann, 1895-1945). They moved to Amsterdam in 1934 with her grandmother, Amalia Wiener. Around 1938 Alfred moved to London, and he relocated to the United States before Pearl Harbor. Ruth was deported to Westerbork with her mother and sisters, Eva and Mirjam, in June 1943. They were transferred to Bergen-Belsen in January 1944. They left in January 1945 for Switzerland as part of a prisoner exchange based on Paraguayan passports her father had purchased for them. Her mother died upon arrival in Switzerland, and Ruth and her sisters were transferred to Marseilles, where they were put on a boat to the United States in February 1945.

Belt created from leather scraps by a concentration camp prisoner

The belt was created by Ruth Wiener from leather scraps found in her workplace in Bergen-Belsen concentration camp.

Bouquet of leather flowers made by an inmate at Bergen Belsen

The bouquet was created by Ruth Wiener from leather scraps found in her workplace in Bergen-Belsen concentration camp.

The pin was created by Ruth Wiener from leather scraps found in her workplace in Westerbork concentration camp.

The Ruth Wiener Klemens papers consist of biographical materials, registration correspondence and forms, and a Westerbork map and bath ticket documenting the status of the Wiener family from Berlin in Amsterdam, their deportation to Westerbork, and their transfer to Bergen‐Belsen. Biographical materials include identification cards, passes, notices, receipts, and a prescription documenting the Wiener family’s status in Amsterdam, their confinement at Westerbork, Ruth’s work harvesting potatoes and in the laundry, her sisters’ health, and their transfer to Bergen‐Belsen. Registration correspondence and forms include a registration form and instructions from the Jewish Council of Amsterdam, a notice from the Amsterdam Central Administration for Jewish Immigration for the Wiener family to make an appearance in order to protect themselves from forced labor camps, a letter from Erich August Paul Puttkammer that the Wieners had paid to be spared from deportation (a protective document with no actual value), and a receipt from the city of Amsterdam confirming that the Wieners were properly registered. The map of Westerbork was hand‐drawn and labeled in Dutch by Ruth Wiener. The bath ticket is an example of the bath passes issued to Westerbork inmates allowing them periodic baths.