REEL 1. Portrait bust of Carl Schurz. Title: “The Vereinigung CARL SCHURZ Berlin presents GERMANY 1934. Directed by O.V. Bothmer, Photographed by Erich Menzel, Music by Walter Winnig, Sound by Erich Dolle, Recorded on Klangfilm apparatus Afifa Sound Print Material Agfa.” UFA Rolling title: “This film is a pictorial record of the ‘Carl Schurz Tour’ of American professors and students, representing 26 American universities and other institutions, through Germany in the summer of 1934. With the object of furthering the friendly relations between America and Germany on the basis of mutual understanding and goodwill, the tour was organized under the auspices of the Vereinigung Carl Schurz (President Dr. Max Ilgner) in close cooperation with the Deutscher Akademischer Austauschdienst (President General Ewald von Massow) and the Amerika-Institut (President Dr. K.O. Bertling). The tour began on July 7, 1934 in Bremen and ended on August 9, 1934 in Hamburg. Mr. E. de Haas, secretary of the Vereinigung Carl Schurz, who had the honor of conducting the tour assisted by a staff of students from the Deutscher Akademischer Austauschdienst, is responsible for the wording of the film and will speak to you in record of the tour.”

Ocean liner Norddeutscher Lloyd Bremen docks on July 7th. The Americans board a train to Bremen. Town of Bremen. The Bremen Roland statue from 1404 in the market square. Streetcar in town. Gothic-style town hall. INT the senate of Bremen meets the Americans, model ship hangs from the ceiling. The students and professors exit town hall crossing over to the Böttcherstraße. Storehouse. Brick house with an ornate wire balcony railing, stained glass window. Bremen Cathedral. Teichmann Fountain in Domshof Square. The group takes a train to Berlin. Visible from the train window is Berlin’s Kaiser Wilhelm Memorial Church. They pass Tiergarten and a bridge over the Spree River. They disembark the train; luggage on the platform. The Carl Schurz-Haus and portrait bust of Carl Schurz’s head. A reception in a courtyard area of the house. Men and women in formal wear converse with one another, drinks in hand. “Humboldt-Haus.” Bus. They disembark at the Kaiser Wilhelm-Institut Fur Biologie in Dahlem. Students explore the Pergamon Museum on Berlin’s Museum Island. Equestrian statue of Emperor William I. City of Berlin. Bus goes through the Brandenburg Gate and Tiergarten. Sanssouci Palace in Potsdam. A windmill. Boat ride on the Havel River. Nazi flag on the boat. People in canoes. 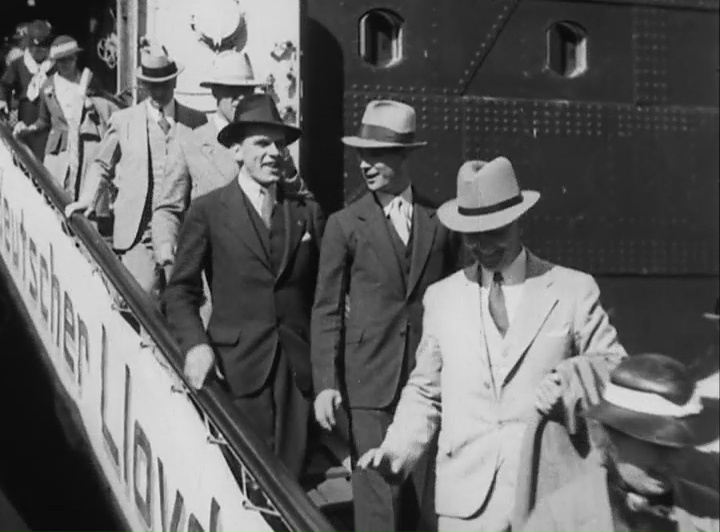