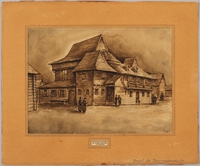 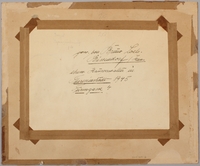 Watercolor of a 17th century wooden synagogue painted by Alfred Bergel in 1944 while he was a prisoner in Theresienstadt concentration camp. The Wooden Synagogue of Zabludow, Poland, was built in the 1630's. German troops invaded Zabludow on June 25, 1941, and burned the town center, including the synagogue. Bergel, a physician and artist, and his wife were deported from Vienna, Austria, to Theresienstadt on October 9, 1942. Alfred worked for the German in the artist's workshop at the camp. In his free time, he created portraits of fellow prisoners and of daily life in the camp. On October 12, 1944, he and his wife were transported to Auschwitz-Birkenau and murdered.

Biography
Alfred Bergel was born in Olmütz, Czechoslovakia (Olomouc, Czech Republic), on January 4, 1902. He earned a medical degree in the 1920s. He was a talented artist and taught at the primary school in the Jewish community of Vienna, Austria. In March 1938, Austria was annexed by Nazi Germany. Anti-Jewish legislation was enacted and the civil rights of Jews were dissolved. On October 9, 1942, Alfred and his wife were deported by the Germans to Theresienstadt concentration camp in German occupied Czechoslovakia. Alfred was housed in the male artist house, where he worked for the Germans. When he was not doing official work, he created portraits of fellow prisoners and of daily life in the camp. On October 12, 1944, he and his wife were transported to Auschwitz-Birkenau death camp, where they were murdered.

Legal Status
Permanent Collection
Provenance
The watercolor was acquired by the United States Holocaust Memorial Museum in 2015.
Funding Note
The acquisition of this collection was made possible by the Crown Family.

The collection consists of correspondence, documents, and newspapers related to the experience of Wilhelm Baumann and his parents before and during the Holocaust in Austria, and Wilhelm's emigration to the United Kingdom in 1939, and deportation to Australia in 1940, and his subsequent release from interment camps and emgration to the United States. The colletion also includes artwork.

The Wilhelm Baumann papers consist largely of correspondence, immigration documents, educational records, identification documents, newspapers, and ephemera; related to the emigration of Wilhelm Baumann and his parents from their native Austria in 1939, his life in the United Kingdom and subsequent classification as an enemy alien, his subsequent deportation to Australia in 1940 on the Dunera, and his experiences in two internment camps in New South Wales and Victoria (Camp Hay and Camp Tatura). The collection also contains an extensive selection of his correspondence with other German and Austrian Jewish émigrés in Australia and elsewhere, his subsequent release from the camps and activities in the Jewish communities of Victoria, and his immigration to the United States, including his reunion with his parents, in 1947. Included are documents related to the period of the emigration of the Baumann family from Austria, including passports, letters of reference from employers, education records, identification documents, and similar materials. The section pertaining to Wilhelm Baumann’s life in the two Australian internment camps includes correspondence with various authorities, including the U.S. Department of State, regarding his efforts to obtain release from the camps, in the hopes—after early 1941—of being able to immigrate to the United States, to rejoin his parents. In addition, while there are no documents related to the voyage on the Dunera, there are many documents about life in the camps after arrival in Australia, including documents related to the kosher kitchen that Baumann worked in; a newsletter produced by internees in Camp Hay, titled “The Boomerang,” with artwork by Baumann on the cover; and miscellaneous documents from Baumann’s period in the camps, ranging from samples of camp scrip, records of educational courses taken by Baumann in the camp, letters of reference, and documents pertaining to his release and parole in 1943. By far the most extensive body of documents in this collection is in the form of correspondence received by Baumann, mostly during his period in Australia from 1940 to 1948, but in particular during his internment and in the immediate aftermath. Extensive correspondence from his parents document their efforts to maintain contact with him after his deportation from Britain on the Dunera, his father’s internment as an enemy alien in a camp on the Isle of Man, his parents’ immigration to the United States in February 1941, and their first impressions of New York and of Shreveport, Louisiana, and their adaptation to life in the latter city and preparation for his eventual arrival there. Other family correspondence includes letters from the family of his uncle, Julius Steinherz, in New York, who had facilitated his parents’ immigration, as well as returned mail that Baumann had sent to his aunt in Vienna, Elsa Steinherz, presumably after her deportation to the camps in 1942. The bulk of the remaining correspondence is from other current and former internees, several of whom Baumann befriended while living in Swansea, others of whom were cousins of his, and with whom he stayed in contact during the following years, as they were each deported to different camps for enemy aliens in England, Canada, or Australia, or in the years following their release, when some enlisted to fight in the British Army, and others settled in Australia, Palestine, or other places. A few files also contain correspondence from pen pals who wrote to Baumann in order to encourage him during his internment in the camps. One example, the correspondence of Gisela Heideman, began when a representative of a Jewish women’s group visited her home town in Australia, and asked other women who were Jewish emigres to write to men interned in these camps (Heideman’s family had immigrated from Germany to Australia a few years earlier, and she often shared reflections about her attempts to assimilate into Australian culture). Additional correspondence from various aid groups, who sought to help the internees of Camp Hay and Camp Tatura, is also included. The last group of documents, from his post-camp life, including his immigration to the United States, contains documents related to his years in Australia from 1943-1948, as well as items documenting his immigration to the United States in 1948 and its immediate aftermath. Material from his life in Australia include educational records, financial records, arrangements to obtain transport to the United States, including several unsuccessful ships to obtain passage on a ship in 1946-1947, as well as some documents related to his activities in various Jewish communities in Victoria during this period. Included in the latter category are texts of plays, songs, and theatrical productions authored by Baumann, articles he submitted to newspapers for publication, and items related to a theatrical production staged by the “Young Mizrahi,” which Baumann helped produce. Also included are documents relating to Baumann’s immediate post-immigration life in the United States, including an art exhibition in Shreveport that he took part in during 1947, correspondence, invitations and other material from his wedding to Beatrice Blach in 1949, and files from synagogues he attended or was affiliated with in the following years. Two oversize folders also contain Australian newspapers issued on V-E and V-J day in 1945, and a calendar from Melbourne, from 1947. Various drawings, one by Robert Hoffmann, the remainder by Baumann (signed with his nickname, Toby), have been removed from the collection and cataloged individually as artifacts.

Drawing of a man in a kippah

Watercolor view of hills and a body of water

Watercolor image of a canyon, trees, and water

Pencil drawing of a synagogue

Pencil drawing of a soldiers marching in formation

Pencil drawing of a soldiers marching in formation behind a vehicle

Pencil drawing of three male angels with wings and halos

Bulllet hasn't got my name

View All 13 Items in the Collection