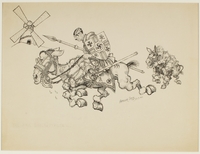 Physical Description
Two figures riding mules toward windmill that says "FREEDOM." Central figure is Hitler dressed in armor, carrying lance and shield marked with swastika, iron crosses and skull and cross bones. The face of the mule Hitler is riding has similarities to Hirohito, and the bridle is marked "NIPPON." The far right figure is dressed in Nazi uniform, and the bridle on the mule he is riding is marked "POPOLO" "ITALIANO." Both figures are shoeless.

Legal Status
Permanent Collection
Provenance
The drawing was donated to the United States Holocaust Memorial Museum in 1995 by Alexandra and Joseph Braciejowski, the daughter and son-in-law of Arthur Szyk.

Drawing of satirical subject matter relating to World War II created in the United States. Matted image of Hitler with a glass of champagne in his right hand, index finger of left hand pointing up, bottle of champagne in bucket in front of table; in graphite on mat along lower edge, "Arthur Szyk, Ink Drawing 'Champagne for me--' 1942" Signed "Arthur Szyk/N.Y. 42" in ink, lower right corner. Inscribed "What have you done to my fleet!?..." in graphite, lower left corner.

Drawing of satirical subject matter relating to World War II created in the United States. Image of what looks to be a Russian soldier in fur coat and hat, looking down at German soldier on ground. Russian soldier has gun in right hand and index finger of left hand pointing up. Border of paper gold with black markings and diamond shaped negative images. Signed "Arthur Szyk/N.Y. 42" in ink, lower right corner. Inscribed "No, Jerry, this is no picnic!..." in graphite, lower left edge.

Drawing of satirical subject matter relating to World War II created in the United States. Image of Rudolf Hess in Nazi uniform standing with arms raised at the elbow, palms out. Signed "Arthur Szyk/N.Y. 1941." in ink, lower right corner. Incribed "HESS/Of course he is crazy, - taing the English for suckers..." in graphite, beneath drawing, center of lower half. Created by Arthur Szyk, 1941, New York, United States.

Drawing of satirical subject matter relating to World War II created in the United States. Image of U.S. soldier grasping the outline of Italy while a mouse with swastika runs from the top of Italy. Signed "Arthur Szyk/November 17-1942" in ink, lower right corner. Inscribed "NORTH AFRICA" in ink, lower third, central "A thing to come..." in graphite, lower left corner.

Satirical drawing created by Arthur Szyk in the United States. In 1921, Szyk moved to Paris to escape Bolshevik rule in his native Poland, where established a career as one of the greatest modern creators of illuminated miniatures. In June 1940, Nazi Germany conquered France. Szyk emigrated to the United States that year and became known for his anti-Fascist political caricatures. Throughout his career, he used his art in support of human dignity, freedom, and tolerance.

Drawing of satirical subject matter relating to World War II and created in the United States. Image of man wearing Nazi uniform, falling from a cliff ledge marked RUSSIA into open pit shaped like grave marked at head with swastika above rectangular plaque bearing words "SCHIKLGRUBER'S/DREAM." Signed "Arthur Szyk" in ink, lower right corner. Inscribed "We are not defeated! / We are falling back on prepared positions..." in graphite, upper left corner. Verso: "Szyk, 2 cols Thurs / Return to Shen-----" in graphite, upper half.

Drawing of satirical subject matter relating to World War II created in the United States. Image of two soldiers, dressed in Russian uniforms, one holding the limp body of another in left hand extending the right arm with machine gun which says "MADE IN U.S.A.", map bag labeled "OUR / COMMON FATE" on body of limp soldier. Signed "Arthur Szyk/N.Y. 42." in ink, lower right quadrant. Inscribed "Never mind the the elections! Give me the second front!!!..." in graphite, bottom edge.

Drawing of satirical subject matter relating to World War II created in the United States. Image of two Nazi officers, one on left seated and reading paper (American Press) at desk, other standing in front of desk with hat on, on paper with pre-printed border in bronze, around edge of paper. Signed "Arthur Szyk/N.Y. 42." in ink, lower central half. Inscribed "Did you send and iron cross to the Anaconda people?" in graphite, top edge.

Drawing of satirical subject matter relating to World War II created in the United States. Matted image of Goebbels speaking into a microphone, a building lableled "Stalingrad" in ink, in background, swastikas and bodies litter the ground; adhesive label attached to paper mount. Signed "Arthur Szyk/N.Y. 43." in ink, right side, center. Inscribed "It's a lie! The German army is still around Stalingrad and will remain there forever!" in blue ink, lower edge. Mount inscribed "George- Eddie, K----- >Please don't mark up this orignal art. It is only loaned to use." in graphite, on adhesive label attached to paper mount. Stamped, center, side edges, ink, "INSERT"; graphite markings below signature; black grease pencil or crayon marking at right edge, lower half; upper left corner, graphite, "19086"; markings also on verso.

Satirical drawing created by Arthur Szyk in 1942 in the US. It has a caricature of Stalin on horseback dragging Hitler in the uniform of a German soldier through the snow.

Satirical sketch relating to WW II created by Arthur Szyk after his emigration to the United States.

Six page biography of Arthur Szyk and his work. Undated, no author given.

View All 87 Items in the Collection