Officers oversee training and exercises at a Hitler Youth camp

In Groedig, Austria, the Hitler Youth camp's site manager gives commands to the organized troop. He has a death's head emblem on his cap. A HJ member with SS patch practices giving orders. The troops run drills. A senior Hitler Youth officer with glasses reviews the men and gives orders. He wears a Hitler Youth uniform, with the rank of Obergebietsfuehrer, as well as an infantry assault badge and the ribbon for the Iron Cross, Second Class. 01:01:07 SS Oberscharfuehrer at left. The officer, second from left (shorter man), is an army Unteroffizier (roughly a corporal). He wears a buttonhole ribbon indicating the award of the Iron Cross, Second Class. In the next shot, 01:01:09, you can see his silver Armored Assault Badge (in use from the end of 1939 on); that would make him a tank crewman with combat experience. The troops raise the Hitler Youth flag, march, run drills, and conduct target practice. 01:03:57 CU, the target sheet with bullet holes pierced through it. The troops exercise in the field. 01:05:06 They practice camouflaging themselves with mud and branches. A Hitler Youth scouts from a thicket. The Hitler Youth members continue physical training and playing sports. 01:09:05 Brief view of two elderly women local Austrians watching the boys race past the finish line. One boy wears an undershirt with the SS logo as they clean and polish their shoes. 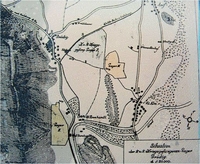 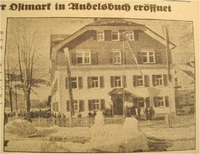 Legal Status
Permanent Collection
Film Provenance
Capt. Robert Charles Gale served with the U.S. 4th Infantry Division from 1942-1946. He obtained five 16mm films from the Berchtesgaden (15km from Groedig, Austria) in Spring 1945 and donated them via his son-in-law and daughter, James and Barbara Gatti, to the United States Holocaust Memorial Museum in February 2013.
Note
The camp at Niederalm, Groedig was used as a training school for the Hitler Youth after 1938. During the war it became a HJ training school for operating Flak guns. In 1944/1945, refugees were accommodated in the remaining barracks, also known as Swabia camp.

Conditions on Access
You do not require further permission from the Museum to access this archival media.
Copyright
Unknown copyright
Conditions on Use
Film copyright holder is unknown. The Museum has made reasonable efforts and has not been able to identify and/or locate a copyright owner of this film. The Museum therefore places no restrictions on use of this material, but cannot provide any information to the user about the copyright owner. The user is solely responsible for making a determination as to if and how the material may be used. If you have information regarding the copyright owner, please contact filmvideo@ushmm.org.

Training at a Hitler Youth camp

Pan slowly up to a Hitler Youth Flag waving. A mountain range is visible. 00:01:15 A Hitler Youth organizer meets with members outside the Salzburg train station prior to leaving for camp. The boys carry suitcases. Sign by the road with "HJ Fuehrerschule Groedig 1km" and a two-toned diamond with a swastika. Scenes of the camp at Groedig and mountain landscape from above. 00:02:00 The boys pile out of the bus and are arranged into groups. Boys carry uniforms out of the administration building. The algiz rune, a symbol Nazis used as a celebration of the history of German language, is displayed prominently on the door. 00:02:47 A doctor examines one of the youth members. The boys are woken up at 6:00 am and lined up for exercises and training. Boys exercising. 00:05:52 HJ throwing mock hand grenades. 00:06:11 HJ playing Battle ball (Kampfball). 00:06:25 Quick sequence in Munich, German soldiers drive past the cathedral. They march in Karolinenplatz by the large, metal-plated obelisk. Nazi propaganda hangs from houses and buildings. The NSDAP established a remote government location in the neighborhood’s Brown House as early as 1930; the building was destroyed by Allied air bombs late in the war. 00:06:59 Back in the mountains at Groedig camp, Hitler Youth members are taught to use compasses, maps, and guns. The boys march under a sign reading "elementary shooting space" on their way to target practice. 00:09:19 The boys work outdoors staking plots and digging. Older members of the Hitler Youth and their commanders hike up a mountain. They reach the summit mount and picnic. 00:11:07 Back at camp, the bare-shirted men sing and play a guitar and a zither. 00:12:17 Hitler Youth lay a wreath on a grave (from the cemetery built during WWI holding mostly Russian POWs and some Austrian war dead) and salute. The battalion commanders in uniform shake men's hands (in civilian dress).

Part of a Nazi educational film (propaganda) [Aufklaerungsfilm] produced by the Nazi Party's Rassenpolitische Amt [Office of Racial Policy] regarding "unheilbare Geistkranke" [the "incurably insane"]. German mental hospitals and its patients including Jews. Text discusses "causes" and possible "solutions." Uses intertitles and graphics to discuss genetics of idiocy, unfair burden German people must bear to pay costs, and danger of ever increasing numbers of mentally ill. Patients supposedly live in luxury while many "normal" hardworking Germans live in substandard conditions.

Teil I. Missing titles at head. Hitler Youth (HJ) boys on boat, one looks through binoculars with ship captain. Boys exercise, perform calisthenics, and box in uniforms on deck. Swimming. Musical entertainment with guitar and accordion. 01:01:21 Boys in dress uniform visit a fountain on a plaza, probably in Rome, Italy. View overlooking city. The group visits ruins. 01:01:28 HJ boys in civilian dress walk past a pyramid in Egypt. Tourist views of the pyramids and the Great Sphinx of Giza. 01:02:19 Local military men guard ancient ruins. 01:02:40 Ancient temple. Men with fez hats ride on horses passing by an ancient building, maybe in Turkey. 01:03:00 HJ boys in white dress uniform on boat, practicing drills, receiving safari hats. MS, ship with HJ troops and banner, "HJ WILLKOMMEN!", waving flag of Japan along with swastika flag. Group of men in dark uniforms disembark ship, greeted by Japanese military ceremony with band. 01:03:38 Crowd of Japanese civilians and children waving flags of Imperial Japan and Nazi Germany filmed from the train with German HJ boys. 01:03:51 German intertitle. At a camp near Yamanaka, HJ and Japanese youth raise the flag and climb the 3800 meter high Mount Fuji. 01:05:21 German and Japanese youth groups observe something in the distance and hike in a rocky place, including some higher-level officials. Waterfall. CU, Japanese family. LS, Japanese ceremony. 01:06:08 Close views of HJ boys on boat, speaking with a Japanese man in a business suit. Hiking, waterfall. INT, Germans wear Japanese robes and eat a meal indoors. Train arrives at a station, Japanese civilians wave flags from the platform. Good CUs of Japanese children, some saluting. 01:07:34 Nazi men salute crowd of Japanese lined up in a plaza, including a band, some in uniform. Germans visit a stream and return to a bus. Boarding a boat. Raising flag at a training camp near a lake. Germans play drums. Good CUs of Japanese. The German HJ troops tour a factory, parade, and travel through Japan. 01:09:58 HJ salute group of Japanese military and women. Children gather around. Men on horseback in town, followed by HJ boys. 01:10:50 German intertitle. Rally in Tokyo with 25,000 students featuring Prince Chichibu (Yasuhito). Pan of stadium grounds, uniformed crowd, movie camera, Prince Chichibu, and a Nazi official speaking from the platform. Various groups march. 01:12:01 Athletes march by on a track, perform calisthenics on grass field, and compete in track and field events.

Teil II. German intertitle. Training camp in Kokuhara, Japan for settlers of Manchuria. German Hitler Youth (HJ) troops in white dress uniform visit the camp. Japanese practice drills - marching, shooting, and drumming. 01:01:30 German intertitle. HJ visit the Ise-Shrine and march on a city street and across a bridge. Shops and housing in town. HJ continue touring Japan, visiting lake and tourist sites by boat. German intertitle. Men with buckets dive for Mikimoto pearls off the island of Toba. CUs, one HJ youth holds four pearls in his hand. HJ boys fish and participate in a ceremony, some of the Japanese are in traditional costume. 01:05:11 A Japanese marching band in a city square. Spectators with Japanese and swastika flags line the parade route. Large group of military gather in stadium grounds. CUs, HJ in uniform sitting in audience. CUs, Japanese military, some stand at attention and others perform drills. HJ visit a Japanese shrine and the countryside. They sit on a ship deck, waving and clapping. Parade. HAS, overview of city. HJ visit a factory. They enter a stadium where performers are configured in the shape of a swastika to showcase warrior movements. In a different outdoor location, children dance in a circle with small flags. Japanese civilian women and children line the road to see HJ, a Nazi tickles one of the toddlers. More views of a training camp (or a village). MSs, Japanese women in black with kerchiefs in a row, a local family filmed from automobile, and farming activity. Boats and airplane on a lake. More sights of Japan. German intertitle. Students in Kobe show their athleticism with calisthenics drills and a sporting match while HJ boys in uniform spectate. 01:10:50 A group of Japanese voluntary labor service members stand at attention. HJ troops don bandannas with the symbol of Japan and feverishly dig in the soil along with the volunteer laborers. German intertitle. The Hitler Youth depart Japan after a "rough" autumn in Kobe and bid a ceremonious farewell at a harbor. Hundreds of Japanese bearing flags crowd the docks. HJ wave. ENDE.

Bund Deutscher Maedel (BdM) girls in uniform bike along country road. Girls on boat, singing with Hitler Youth (HJ) boys. Stone gate in Hainburg an der Donau adorned with swastika and eagle. BdM girls line the road, local Austrians in front of shops in BG. BDM girls come through on bicycles and shake hands. Girls march through town streets, banner (illegible) hangs above the street in the BG. They continue along country roads and wave to farmers. Pan down of white building in another village, most probably located in Burgenland. Girls wash and drink from a well and continue biking. Austrian teenage girls and children follow. They sing with children in a courtyard. 01:03:26 Farmer swings horse whip near Neusiedler See in Burgenland. Men drive horses to the paddock. BdM girls walk through the village. Village woman in kerchief pushes cart with homemade pies/bread. BdM girls assist farmers with bales of hay. INTs, local Austrian family eats bread; BdM girl pours milk. They farm and ride in wagon. Local men, women, and children watch the BdM girls from the town's street. Horses freely run along village road. BdM girls on wagon, singing, enter a barn. 01:07:24 VAR, BdM girls gather at the lake, Neusiedler See, in Burgenland, boating. Men load the girls' bicycles on a sailboat. MS, local farmers (women) and their crops.

View All 6 Items in the Collection