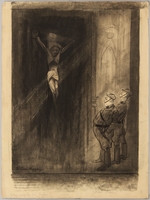 Artwork Title
The Nazis verspotten Jesus Christus
SubTitle
The King of the Jews
Series Title
11 in a series of 31
Date
publication/distribution:  1940 October 22