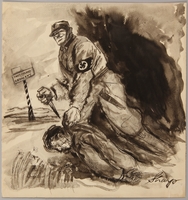 Physical Description
Image of a man wearing a Nazi uniform holding a knife to the back of the neck of another man who is on his knees; sign that says "Switzerland" on top of a line, "Germany" written underneath line
Dimensions
overall: Height: 15.670 inches (39.802 cm) | Width: 14.800 inches (37.592 cm)
Materials
overall : paper, ink, adhesive
Signature
lower right hand corner, in ink, "Sharp"
Contributor
Artist: William Sharp