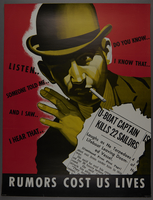 Poster depicting a man with a cigarette with his hand to his ear; behind him are phrases he is listening to, including, "Do you know...", "I know that...", "Someone told me...", and "I hear that..." Under the man's face is an illustration of a news clipping with the headline, "U-Boat Captain Kills 22 Sailors."

Physical Description
Rectangular poster depicting a man with a cigarette with his hand to his ear; behind him are phrases he is listening to, including, "Do you know...", "I know that...", "Someone told me...", and "I hear that..." Under the man's face is an illustration of a news clipping with the headline, "U-Boat Captain Kills 22 Sailors."
Dimensions
overall: Height: 26.000 inches (66.04 cm) | Width: 20.000 inches (50.8 cm)
Materials
overall : paper, ink
Contributor
Printer: United States Government Printing Office
Distributor: United States Office of War Information

Biography
The United States Office of War Information (OWI) was created on June 13, 1942, to centralize and control the content and production of government information and propaganda about the war. It coordinated the release of war news for domestic use, and using posters along with radio broadcasts, worked to promote patriotism, warn about foreign spies, and recruit women into war work. The office also established an overseas branch, which launched a large-scale information and propaganda campaign abroad. The government appealed to the public through popular culture and more than a quarter of a billion dollars' worth of advertising was donated during the first three years of the National Defense Savings Program. Victory in Europe was declared on May 8, 1945, and in Japan on September 2, 1945. The OWI ceased operation in September.

Poster of a giant snowball rolling toward the Axis leaders

Poster of a worker flexing his bicep

Poster for the 5th War Loan campaign with a broom sweeping Nazi emblems. The campaign for the 5th War Loan subscription took place from June 12 - July 8, 1944. There were 8 war loan drives from 1942 to 1945. By the end of the war, 85 million Americans had purchased 185.7 billion dollars of bonds.

US and Allied Nations propaganda poster with an image of the Statue of Liberty and Allied flags. It was issued by the Office of War Information as a symbol of the unity of the Allied forces against their common enemies, the Axis powers. On January 1, 1942, the US, Great Britain, Soviet Union, and China signed the United Nations Declaration, joined the next day by 22 other nations. The signatory governments pledged to exert the maximum war effort and not to make a separate peace. The United Nations was founded 3 years later. The need to manage the war on the Home Front led to the establishment of the OWI in June 1942. This office controlled the design and distribution of war information to the American public in posters, photographs, radio shows, and films. They commissioned work from leading artists and the posers were distributed to retailers for display.

Poster of a crowd of people heading to work

Security of War Information Campaign poster featuring the Uncle Sam icon with his finger to his mouth in a hushing gesture. This modification of the Uncle Sam image, created by Montgomery Flagg for World War I recruitment posters, was designed by Leon Helguera, a Mexican artist who immigrated to America in 1916. The Security of War Information Campaign, also known as the “hush-hush campaign,” was a cooperative project by the Army, Navy, and FBI. The project was undertaken by the Office of War Information (OWI) with the oversight of a Security Committee, which included representatives from the OWI, the Army, Navy, FBI, and other agencies. The campaign focused on educating the public about the need for discretion in their communication to prevent information from being leaked to the enemy. The need to manage information about the war on the home front led to the establishment of the OWI in June 1942. This office controlled the design and distribution of war information to the American public in print, radio, and film media, and commissioned work from leading artists. The “careless talk series” originated in 1940 in Great Britain. It highlighted the many ways that careless talk could leak sensitive information that enemies would use to kill soldiers, sink ships, and undermine the war effort.

US propaganda poster about the Nazi threat

“Americans All” bilingual poster featuring two hats, one symbolizing Mexico and the other symbolizing America, raised up in unison. The poster was designed to promote unity between America’s multi-ethnic demographics and the nations of the Western Hemisphere during wartime. The poster was designed by Leon Helguera, a Mexican artist who immigrated to America in 1916, and was commissioned by the Office of Wartime Information (OWI). The OWI was established in 1942, and managed information about the war on the home front. This office controlled the design and distribution of war information to the American public in print, radio, and film media, and commissioned work from leading artists. The “Americans All” slogan expressed a call for unity among Americans of different backgrounds and for solidarity between the nations of the Western Hemisphere in the face of the Axis threat. In 1942, racial tensions in the Southwestern United States were at a critical point following the Sleepy Lagoon Murder in August in Los Angeles, California. Twenty-two Mexican Americans were arrested and tried without due process for the crime, causing riots in Los Angeles in 1943.The Axis powers inflamed this division with anti-American radio broadcasts in Latin America to sway public opinion. To ease the racial unrest, the OWI introduced a campaign that utilized patriotic images, with slogans in Spanish and English, to appeal to Americans of Mexican descent. Despite the hostility, Mexican Americans provided sizable contributions to the war effort with over 17,000 working in Los Angeles shipyards, airfields, and armament factories.

Rectangular poster with black lettering on a red background urging readers not to discuss the location or movements of men, ships and materials within, to or from Asiatic-Pacific areas.

One by One, His Legs Will Be Broken

Poster designed by Norman Rockwell advertising for the Children’s Crusade for Children penny sharing relief drive to provide assistance for the war stricken children of Europe. The program was organized during the winter of 1939-1940 under the leadership of Marion G. Canby and Dorothy Canfield Fisher. The program was supported by First Lady Eleanor Roosevelt and special tin collection cans were decorated with the design featured on this poster and distributed to schools around the country. The children were instructed to give as many pennies as they were years old. The principal or a delegated student would then retrieve the money from the can and mail it to a collection center in Kansas or Vermont depending on the school’s location. The crusade had two purposes: to make American children aware of the blessings of living in a democratic country, and to give these children an opportunity to express their sympathy for the plight of war-stricken children in other lands. The nationwide collection ran from April 23 to April 30, 1940.

Poster with image of Hitler being punched in the chin, swastikas on his eyes and "2nd War Loan" on the fist; "Right in Der Fuerher's Face!/Invest Now...Buy More Bonds/Make Your Dollars Fight"

Poster, "They're still giving/Are You? Give to your Community War Fund"

Poster with image of soldier standing with helmet in hand, head bowed, in front of three graves marked with two crosses and one Star of David; "They're still giving/Are You? Give to your Community War Fund"; artist John Falter.

Poster: Image of Hitler dressed as the Pied Piper leading workers; captioned at top: “Don’t follow the Pied Piper”; at bottom: “Eat, drink, play-moderately- / and STAY ON THE JOB”; one of a series of posters sponsored by The National Industrial Information Committee”; signed in lower right by artist “Golovin”; in English; dated 1941-1945

Poster: Image of Hitler reading a “US Newspaper” and speaking into a microphone; captioned beneath: ““We have forces working / for us all over the world” / Adolf Hitler”; one of a series of posters sponsored by The National Industrial Information Committee”; signed in lower right by artist “Golovin”; in English; dated 1941-1945

Propaganda map of Northern and Eastern Europe distributed by the National Propaganda Office of the Nazi Party showing previous German territorial boundaries compared with their military expansion as of 1941. The map shows German occupied territory in red overlaid with the German borders before and during WWI. The poster was published by the National Propaganda Office, which controlled the film, radio, theater, and press and chose what information to distribute to the public. By 1941, Germany had made alliances with Italy, Finland, Bulgaria, and Hungary and had conquered France, Norway, and every European nation in Eastern Europe. On June 22, 1941, Germany, with the support of its allies, invaded the Soviet Union, and by September, they had advanced past the city of Smolensk. The poster implies that information about German defeats from the Soviet Union and Britain are lies and presents Germany’s territorial expansion throughout Eastern Europe as evidence.

Put this snake where he belongs

American propaganda poster: recto: color image captioned “Put this snake where he belongs.” across top and “Don’t mix scrap metals. – There’s a separate box for each kind of scrap." at bottom; images of snake made from collage of items with German cap, mustache and hair to make it look like Hitler; verso: black and white photo of Douglas C-54 Combat-Transport plane; in English

Poster: “Association Nationale des Victimes du Nazisme”; red background, image of black SS runes in center with woman in blue dress with one arm draped over the left S, head back, and other hand on the same S, with baby laying on the ground at her feet with its arms spread open; dated 1945; Paris, France; in French

Ten years ago: The Nazis Burned These Books

View All 62 Items in the Collection