7 reels (1 missing). This Soviet-made film was screened on February 19, 1946 on the 62nd day of the Nuremberg Trial and submitted as evidence relevant to the indictment for "crimes against humanity." The one-hour film with voiceover commentary shows visual evidence of the extermination camps of Auschwitz and Majdanek and appeals to spectators' emotions by emphasizing individual victims. The central argument of the film is that the Germans were the executioners of peaceful Soviet citizens. At the time, it made a very strong impression on both the accused and press. The film is a re-edited compilation of footage collected by the Soviet film team over four years (primarily used for propagandistic ends in wartime Soviet newsreels and documentaries). It was prepared in emergency by the Soviet prosecution team and minister of cinema following the projection of Nazi Concentration Camps presented by the Americans on November 29, 1945. 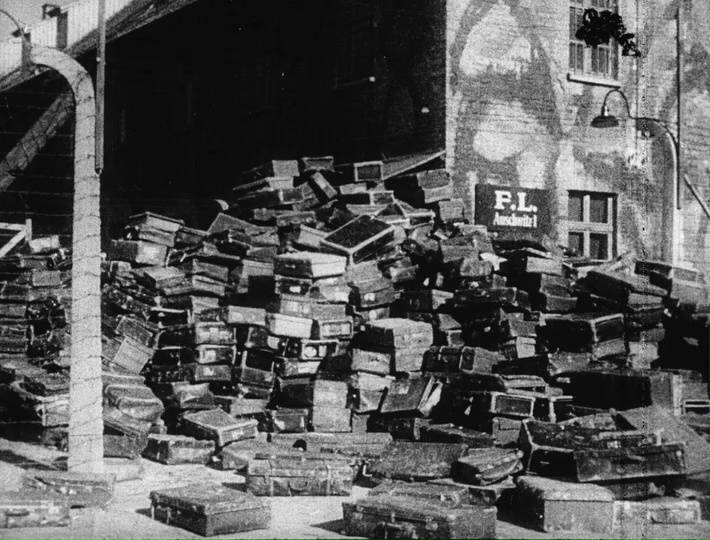 Credit
Accessed at US Holocaust Memorial Museum, courtesy of the International Court of Justice Nuremberg Archives

Elizaveta Svilova began film editing for Pathe at age 14. By 1918, she was editing feature films at Goskino, the Soviet state cinema, and from 1922 to 1924 she was their chief editor. She met Dziga Vertov while working as a film editor and they married in 1924. After her husband fell out of favor in the Soviet film industry, Svilova continued to work in film and support the both of them. She appeared in and edited the sensational experimental film "Man with a Movie Camera" (1929) and is best known for pioneering montage documentary. Her directorial debut was in 1942 with "For You at the Front." She edited the first film of Auschwitz, taken at the liberation of the camp in January 1945, for the Central Studio for Documentary Film (Moscow). Her 1946 film on German-Fascist Atrocities was presented as evidence by the Soviet prosecution team at the Nuremberg Trials in 1946. She later co-directed a film about the trials condemning Nazi atrocities called "People's Trial." From her husband's death in 1954 until her own in 1975, Svilova was active in the publication and dissemination of his theoretical work, maintaining archival prints of Vertov's work and ensuring his legacy would not be forgotten.

Copyright
Copyright. International Court of Justice
Conditions on Use
Researchers must obtain permission from the International Court of Justice to copy and use any of the sound and film recordings in this collection. Contact ICJ librarians Cyril Emery (c.emery@icj-cij.org) and Artur Brodowicz (a.brodowicz@icj-cij.org).
Record last modified: 2020-02-04 10:40:38
This page: https://collections.ushmm.org/search/catalog/irn616417

This Soviet-made film submitted at Nuremberg on February 21, 1946 concentrates on damage to architecturally important Russian buildings, especially churches and monasteries, as well as the destruction of places of historical interest linked to Russian writers and composers. There are no images of the synagogues that the Nazis ruined or defiled.

Photographs of atrocities in Yugoslavia shown at Nuremberg Trials

This Soviet-made film submitted at Nuremberg on February 26, 1946 includes photo montage of German atrocities in Yugoslavia.

"Nazi Concentration Camps" was compiled as evidence and shown at the Nuremberg Trials on November 29, 1945 as Prosecution Exhibit #230. It contains film evidence of Nazi atrocities at the concentration camps of Leipzig, Penig, Ohrdruf, Hadamar, Breendonck, Hanover, Arnstadt, Nordhausen, Mauthausen, Buchenwald, Dachau, and Belsen. The film was produced for the U.S. Counsel for Prosecution of Axis Criminality in 1945. It was directed by Navy Cmdrs. James B. Donovan and E. Ray Kellogg. George C. Stevens was responsible for directing the photography and filming of the concentration camps as liberated by Allied forces.

"The Nazi Plan" was shown as evidence at the International Military Tribunal in Nuremberg on December 11, 1945. It covers the activities and policies of the Nazi Party in Germany from 1921 to 1944, particularly as reflected in the speeches of Adolf Hitler and the pageantry associated with the Party. The four-hour film was compiled by Budd Schulberg and other military personnel, under the supervision of Navy Commander James Donovan. The compilers took pains to use only German source material, including official newsreels and other German films (1919-45). It was put together for the US Counsel for the Prosecution of Axis Criminality and the US Office of the Chief Counsel for War Crimes. The film was received in evidence as IMT exhibit USA-167. The film consists of four parts: Part I: The rise of the NSDAP, 1921-1933 Part II: Acquiring totalitarian control of Germany, 1933-1935 Part III: Preparation for wars of aggression, 1935-1939 Part IV: Wars of aggression, 1939-1944

This French film of 1943 was commissioned by Nazi Germany's propaganda ministry within occupied France. It is notable as the last film to be directed by Paul Riche (pseudonym of Jean Mamy), an ex-Mason. The film virulently denounces Freemasonry, parliamentarianism, and Jews as part of Vichy's drive agains them and seeks to prove a Jewish-Masonic plot. On France's liberation, the film's writer, producer, and director were purged for collaborating with the Nazis. This very short excerpt (39 seconds) contains the opening title sequence and a newspaper headline regarding President Roosevelt.

The collection includes court transcripts, indictments, sentences, briefings, minutes, etc, related to the proceedings of the International Military Tribunal (IMT) at Nuremberg. The first twenty eight boxes contain: a) Exhibits submitted to the Tribunal by Prosecution and Defense; b) Official Transcripts as taken by Court Reporters, of Court and Commission proceedings; c) Document Books of Prosecution and Defense; d) Trial Briefs, Opening and Closing Statements of Prosecution; e) Final Pleas and Clemency Pleas of Defense; f) Indictment; g) Judgement, Dissenting Opinion and Sentences; h) Minutes of Tribunal Meetings; i) Rules of the Tribunal, Orders of the Tribunal, Court Rulings on the Final Record; and j) Lists, indices and miscellaneous related material. Material was inventoried box by box. The last nine boxes contain only electronic transcriptions of the proceedings before the International Military Tribunal.

View All 8 Items in the Collection