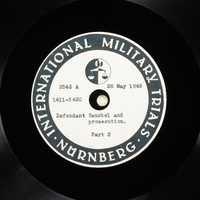 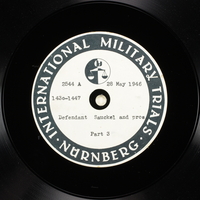 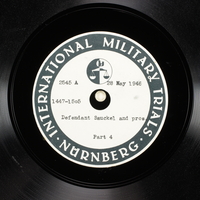 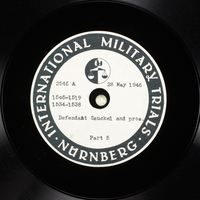 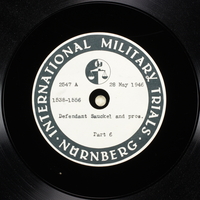 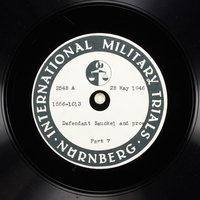 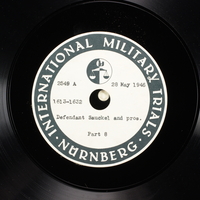 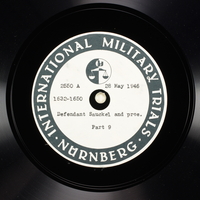 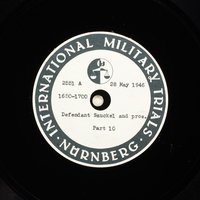 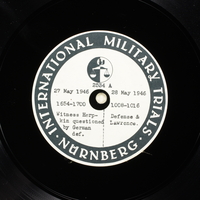 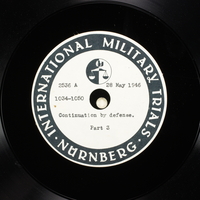 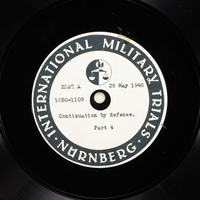 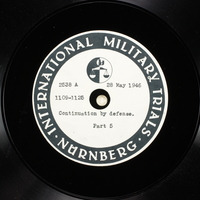 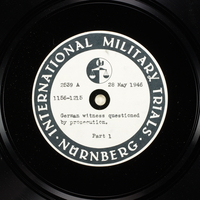 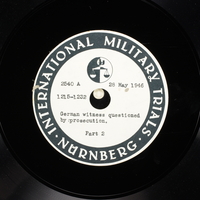 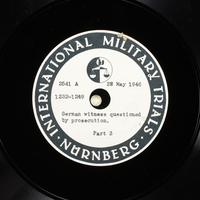 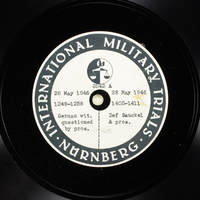 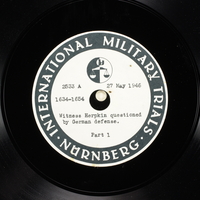 Technical note: It appears that, at the time of recording, the disc labels for Discs 2533A and 2535A were incorrectly affixed on the opposite sides of the discs. The contents of Track 2533A match the label for Disc 2535A and vice-versa.

Technical note: It appears that, at the time of recording, the disc labels for Discs 2528A and 2530A were incorrectly affixed on the opposite sides of the discs. The contents of Track 2528A match the label for Disc 2530A and vice-versa.

7 reels. This Soviet-made film was screened on February 19, 1946 on the 62nd day of the Nuremberg Trial and submitted as evidence relevant to the indictment for "crimes against humanity." The one-hour film with voiceover commentary shows visual evidence of the extermination camps of Auschwitz and Majdanek and appeals to spectators' emotions by emphasizing individual victims. The central argument of the film is that the Germans were the executioners of peaceful Soviet citizens. At the time, it made a very strong impression on both the accused and press. The film is a re-edited compilation of footage collected by the Soviet film team over four years (primarily used for propagandistic ends in wartime Soviet newsreels and documentaries). It was prepared in emergency by the Soviet prosecution team and minister of cinema following the projection of Nazi Concentration Camps presented by the Americans on November 29, 1945. Begins with CUs of evidentiary documents. Atrocities, corpses, women weeping, Soviet soldiers. Exhumation of mass grave, Russians weeping. Corpses at camp.Human remains. Doctors, exhumation, skulls. Human remains at camp, beach. Reburying children in coffins, women weeping. Watchtower, barbed wire, corpses. Gravesite in forest. Fires. Klooga: corpses, CU of victim with number and Star of David. Lublin, INTs corpses. Civilians view bodies and camp barracks. MS, survivors. Aerial views of Majdanek, barracks. Skulls and bones, crematorium. Victims' belongings (shoes, passports, etc.) Pan of survivors behind barbed wire. Aerial views of Auschwitz, maps, women in bunks, barbed wire, emaciated corpses, survivors in striped uniforms. Twins walking between barbed wire fences at Auschwitz, children show tattooed numbers to camera. Zyklon B cans. Demonstration at gallows. Mass gravesite. Doctors examine baby. MSs, victims' clothing, shoes. More victims' belongings, hair. Doctors examining survivors, interviewing nurses. Cemetery. Decapitated bodies, guillotine. Corpses in coffins. Torture instruments.

"Nazi Concentration Camps" was compiled as evidence and shown at the Nuremberg Trials on November 29, 1945 as Prosecution Exhibit #230. It contains film evidence of Nazi atrocities at the concentration camps of Leipzig, Penig, Ohrdruf, Hadamar, Breendonck, Hanover, Arnstadt, Nordhausen, Mauthausen, Buchenwald, Dachau, and Belsen. The film was produced for the U.S. Counsel for Prosecution of Axis Criminality in 1945. It was directed by Navy Cmdrs. James B. Donovan and E. Ray Kellogg. George C. Stevens was responsible for directing the photography and filming of the concentration camps as liberated by Allied forces.

This French film of 1943 was commissioned by Nazi Germany's propaganda ministry within occupied France. It is notable as the last film to be directed by Paul Riche (pseudonym of Jean Mamy), an ex-Mason. The film virulently denounces Freemasonry, parliamentarianism, and Jews as part of Vichy's drive agains them and seeks to prove a Jewish-Masonic plot. On France's liberation, the film's writer, producer, and director were purged for collaborating with the Nazis. This very short excerpt (39 seconds) contains the opening title sequence and a newspaper headline regarding President Roosevelt.

This Soviet-made film submitted at Nuremberg on February 21, 1946 concentrates on damage to architecturally important Russian buildings, especially churches and monasteries, as well as the destruction of places of historical interest linked to Russian writers and composers. There are no images of the synagogues that the Nazis ruined or defiled.

"The Nazi Plan" was shown as evidence at the International Military Tribunal in Nuremberg on December 11, 1945. It covers the activities and policies of the Nazi Party in Germany from 1921 to 1944, particularly as reflected in the speeches of Adolf Hitler and the pageantry associated with the Party. The four-hour film was compiled by Budd Schulberg and other military personnel, under the supervision of Navy Commander James Donovan. The compilers took pains to use only German source material, including official newsreels and other German films (1919-45). It was put together for the US Counsel for the Prosecution of Axis Criminality and the US Office of the Chief Counsel for War Crimes. The film was received in evidence as IMT exhibit USA-167. The film consists of four parts: Part I: The rise of the NSDAP, 1921-1933 Part II: Acquiring totalitarian control of Germany, 1933-1935 Part III: Preparation for wars of aggression, 1935-1939 Part IV: Wars of aggression, 1939-1944

Photographs of atrocities in Yugoslavia shown at Nuremberg Trials

This Soviet-made film submitted at Nuremberg on February 26, 1946 includes photo montage of German atrocities in Yugoslavia.