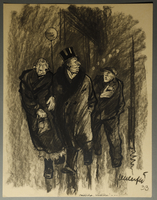 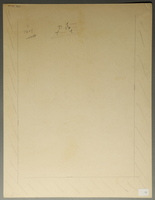 Physical Description
Image of a man approaching a well-to-do couple on the street as he is showing them a badge on his jacket. White adhesive label on verso, upper left corner with "22" typewritten on it.
Dimensions
overall: Height: 13.620 inches (34.595 cm) | Width: 10.380 inches (26.365 cm)
Materials
overall : charcoal, ink, graphite, paper
Markings
Verso: in graphite, top right corner "I"; along left, right and top edges are publisher's cropping marks in graphite; Bottom quarter center, purple ink publisher's stamp reading "Volk und Zeit , Berlin/ No. "7-in graphite" Seite; "7-in graphite"/ Hohe; "10,3-graphite" "3)"/ Breite; "7-in graphite"; to the right of publishers stamp, "8 x 11,5" in graphite and crossed out--below is "7 x 10,3" in graphite and below this is "3" in graphite
Signature
Signed and dated lower right corner of image/sheet
Inscription
German title in ink, bottom edge right of center
Contributor
Artist: William Sharp