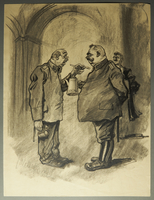 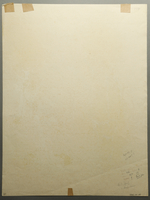 Physical Description
Image of two guards (?) facing each other in conversation, standing under an archway. One is holding a coffee pot in one hand, the other is holding a cigar in one hand and two cups in the other.
Dimensions
overall: Height: 16.380 inches (41.605 cm) | Width: 12.500 inches (31.75 cm)
Materials
overall : charcoal, ink, graphite, paper
Markings
Verso: upper right corner "104" in graphite; lower right quadrant "31,5.32" in graphite crossed out. "B in graphite, follows the crossed out numbers. Below, "10,5.12,3" in graphite, "12,3" has been crossed out. Following is "9B" in graphite. Below all of these marks, in the corner in purple ink publisher's stamp reading "Volk und Zeit, Berlin / No.; "46 -in graphite" Seite; "6 -in graphite" / Hohe; "10,5 -in graphite" Then "2) -in graphite" / Breite; "9 -in grpaphite" Then illegible writing in graphite. Under stamp, more illegible writing in graphite"; lower left corner in graphite "20."
Signature
Signed and dated lower left quadrant-lower left corner of image
Contributor
Artist: William Sharp