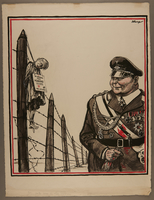 Artwork Title
In the Name of the Fuehrer
Date
creation:  approximately 1930-1945