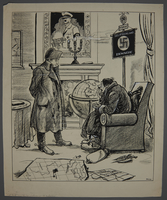 Artwork Title
I, at least had the consolation of St. Helena
Date
creation:  approximately 1930-1945

Physical Description
Image of Hitler sittin in an arm chair, having a conversation with the ghost of Napoleon who is standing in front of a fireplace with a portrait of Adolf Hitler over the mantel. Maps and Globes prominently present, Moscow, Africa, and US have been designated.
Dimensions
overall: Height: 18.000 inches (45.72 cm) | Width: 14.880 inches (37.795 cm)
Materials
overall : paper, charcoal, ink, graphite, tempera
Markings
Verso: "216" in graphite, upper left corner
Signature
lower right corner of image, "Sharp" in ink
Inscription
Title in graphite, recto, in lower left corner
Contributor
Artist: William Sharp