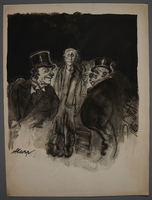 Physical Description
Image of two men in top hats, gleaming at each other. Figure of an innocent looking man in the center. Bombs or missile shells pointed toward figures from right side of the image.
Dimensions
overall: Height: 20.000 inches (50.8 cm) | Width: 15.000 inches (38.1 cm)
Materials
overall : paper, ink wash, ink, graphite
Markings
Verso: "67" in graphite in upper right corner.
Signature
lower left of image, "Sharp"
Inscription
Recto: appears to have been one in graphite that has been erased and is completely illegible.
Contributor
Artist: William Sharp