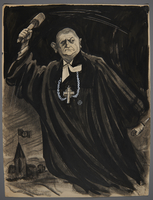 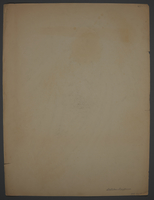 Physical Description
Image of a preacher with cross pendant around his neck and an upraised mallet (?) in his right hand, a dagger in his left hand. What appears to be a church in the background is flying a Nazi flag on its steeple.
Dimensions
overall: Height: 20.000 inches (50.8 cm) | Width: 15.000 inches (38.1 cm)
Materials
overall : paper, charcoal, ink, graphite, tempera
Markings
Recto: lower left corner, "21" in graphite. Verso: "41" in graphite, upper right corner.
Signature
Verso: lower right corner of sheet
Contributor
Artist: William Sharp