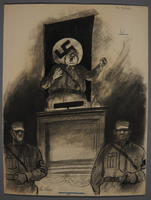 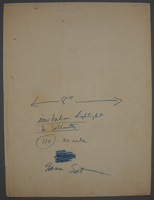 Physical Description
Image of a wildly orating Nazi at a podium, flag with swastika on it hanging behind him. One soldier on each side of the front of the podium. Published.
Dimensions
overall: Height: 19.880 inches (50.495 cm) | Width: 15.000 inches (38.1 cm)
Materials
overall : charcoal, ink, graphite, paper
Markings
Recto: in upper right corner in graphite "55"; upper edge left of center, blank ink stamp "140"; all following in blue pencil, center, ` 8" ' in center of two hiorizontal arrows pointing to the left and right edges; below reads, "imitation highlight -underlined / & silhouette -underlined"; below is "110" encircled, beside it "no rule"; below that is something written that has been completely crossed out; below is "9 am Sat"
Signature
recto, lower edge, left of center, in graphite, "Wm. Sharp"
Inscription
Recto: Title in upper right corner along upper edge.
Contributor
Artist: William Sharp