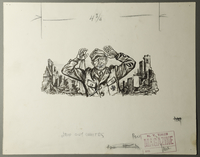 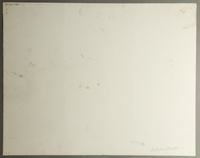 Physical Description
Image of a Nazi Soldier with his hands up in surrender. Scene in background is buildings in ruins, a white flag on one of the houses in the background.
Dimensions
overall: Height: 11.620 inches (29.515 cm) | Width: 14.620 inches (37.135 cm)
Materials
overall : paper, ink, graphite, tempera
Markings
Recto: at center, upper edge, in graphite "4 3/4" with crop marks on either side; lower edge center, in graphite, "DROP OUT WHITES"--to right, "P20" and something else that has been crossed out, in graphite--above this, "P20" ans hasn't been crossed out, in graphite; to right of that, "P24" in graphite, crossed out; lower right quadrant, purple publishers stamp reading, "N.Y. TIMES MAGAZINE / SIZE (in graphite, "hue (?)"). Verso: in blue ink, date stamp in top left quadrant, reading "APR 22 1945"; lower right corner, "72" in graphite
Signature
lower right of image, "WS" in ink. Verso: upper left corner, upside down.
Contributor
Artist: William Sharp