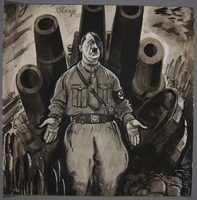 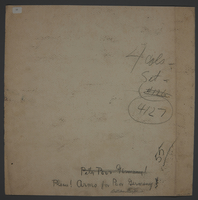 Physical Description
Image of Hitler standing in front of tank cannons, surrounded by all types of artillery. His palms are turned up in a pleading motion and his face shows a piteous look. Verso: white adhesive label with "12" typewritten on it in upper left corner
Dimensions
overall: Height: 14.880 inches (37.795 cm) | Width: 14.880 inches (37.795 cm)
Materials
overall : paper, ink wash, ink, graphite, tempera
Markings
Verso: Right edge, toward top, "4 cols-" / "Set -" / "4126 in a half circle but crossed out / "4127" in a circle / "55" underlined, all in graphite
Signature
Signed and dated upper edge, left of center, "Sharp 35"
Inscription
Verso: lower half of lower half of sheet, center, "Pity Poor Germany!" in graphite and crossed out. Below this is, also in graphite, "Please! Arms for Poor Germany" with a crossed out exclamation point at the end of title.
Contributor
Artist: William Sharp