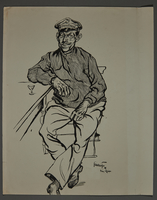 Physical Description
Image of a man seated at a bar or table with a small cordial glass on it, his right arm draped over the corner. Cap on his head says "Dienstmann"
Dimensions
overall: Height: 19.610 inches (49.809 cm)
Materials
overall : paper, ink, graphite
Markings
Verso: "104B" in graphite, upper left corner
Signature
Signed and dated, lower right corner of image in ink
Inscription
Recto: In ink, something illegible beneath signature.
Contributor
Artist: William Sharp