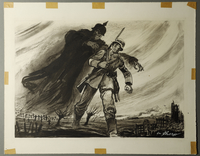 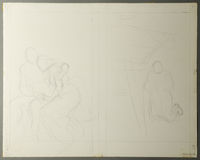 Physical Description
Image of a shadowed Nazi death representation hovering over a German soldier who is looking over his shoulder in fright. Lands surrounding the figures is destroyed, crosses (cemetery) in the left corner of the image. Verso: two distinct miscellaneous sketchings. Sheet divided in half, left and right. Left half appears to be the beginnings of a drawing of a couple huddling together. Right shows a figure kneeling on the ground with arms folded in as if the hands were going to be clasped together in prayer.
Dimensions
overall: Height: 11.500 inches (29.21 cm) | Width: 14.500 inches (36.83 cm)
Materials
overall : paper, charcoal, ink, graphite, tempera
Markings
Verso: lower right corner, in graphite, "51"
Signature
lower right corner of image, in tempera, "Wm. Sharp"
Contributor
Artist: William Sharp