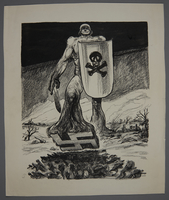 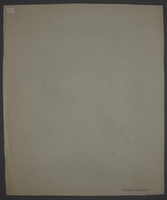 Physical Description
Image of a soldier with a swastika foot, a shield upraised with a skull and crossbones on it, a sword in the right hand, and a helmet on his head. Foot is upraised, preparing to step on people below. Verso: white adhesive label with "5" typewritten on it in the upper left corner.
Dimensions
overall: Height: 17.750 inches (45.085 cm) | Width: 15.000 inches (38.1 cm)
Materials
overall : paper, charcoal, ink, graphite, tempera
Signature
Recto: bottom right corner of image, "Sharp" in ink. Verso: lower right corner
Contributor
Artist: William Sharp