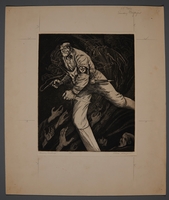 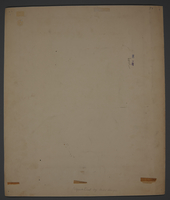 Physical Description
Aquatint. Image of a soldier with a gun in his right hand, a knife in his left hand, and a gas mask around his neck. Shadowed hands in bottom half of image, reaching up to him. Ghostly figures of bad people in the background. Number 5 of 25 prints. Mounted onto a large piece of folded paper with left side cut to reveal image. Mounted with brown paper tape.
Materials
overall : paper, ink, adhesive
Markings
Recto, of matte, all in graphite: publisher's crop marks in each quadrant; top edge, right of center, "N.Y. Times / Sunday Magazine." Verso, of back mount: top right corner, in graphite, "37"; top right quadrant, in graphite, "May"--below this in purple ink stamp, "JUN 4 1944"; in graphite, lower edge, center, "Aquatint by Bill Sharpe [sic]"
Signature
Recto, of image: "William Sharp" in graphite, lower right
Inscription
Recto, of image: lower left corner "Germany Awakened"-in quotes, in graphite. To the right, "5/25" also in graphite.
Contributor
Artist: William Sharp

Legal Status
Permanent Collection
Provenance
The print was donated to the United States Holocaust Memorial Museum in 1995 by Harold Shachner.