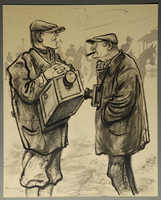 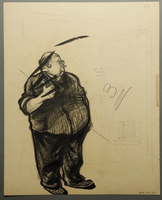 Physical Description
Recto: Image of two photographers at a horse race. Stadium and horses in the background. One man is smoking a cigar and one camera has a frowning face on it.
Verso: Image of a large man smoking a cigar in ink, charcoal, graphite. Other miscellaneous sketching, appearing to be related to the man in image.
Dimensions
overall: Height: 11.620 inches (29.515 cm) | Width: 9.880 inches (25.095 cm)
Materials
overall : paper, ink wash, charcoal, ink, wax crayon, graphite
Markings
Verso, all in graphite: upper right corner, "159"; center, illegible marking (but definitely intentional); right of center, "3" with two underlines below it
Signature
Signed and dated, lower left corner of image/sheet recto, "Schleifer 33"
Contributor
Artist: William Sharp